Hiltzik: The lie that got Hoover Dam built 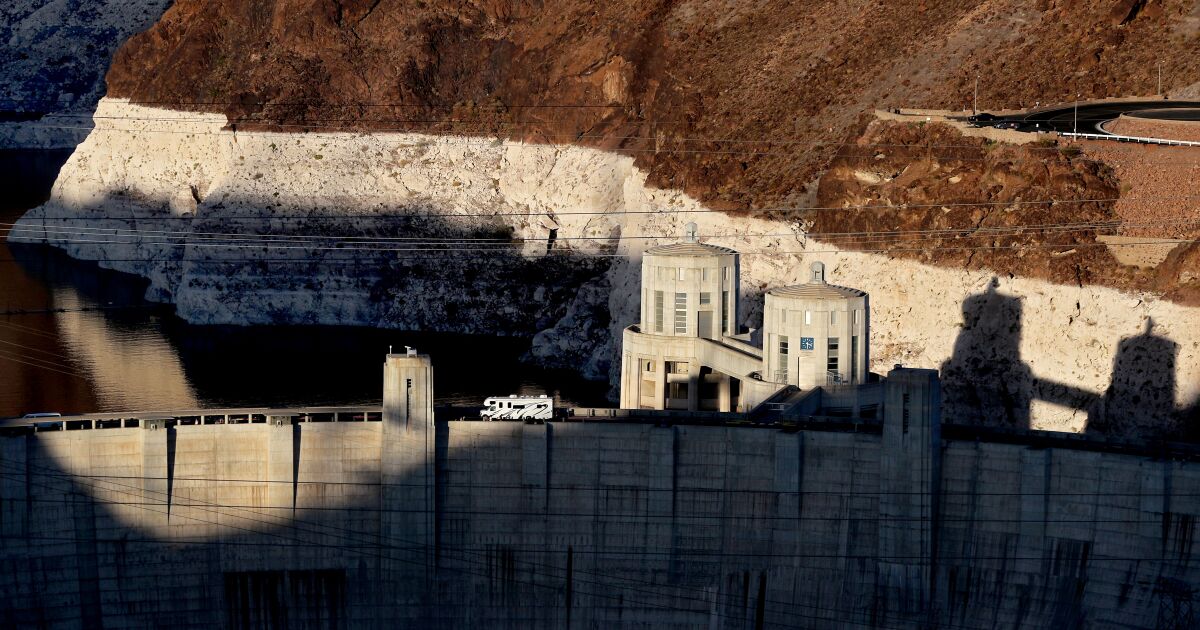 It’s human nature to mark big-number anniversaries, but there’s a centennial looming just ahead that Californians — and other Westerners — might not want to celebrate.

It’s the 100th anniversary of the Colorado River Compact, a seven-state agreement that was signed Nov. 24, 1922.

That evening, in the Ben Hur Room of Santa Fe’s Palace of the Governors, using the lapboard on which Gen. Lew Wallace had written his biblical epic 40 years earlier while serving as New Mexico’s territorial governor, representatives of six of the seven states of the Colorado River Basin applied their signatures to the compact with a gold pen.

If we had cut water use in the Colorado River over the last two decades to what we now understand to be the actual levels of water availability … the crisis wouldn’t be nearly as bad.

The compact — essentially an interstate treaty — set the rules for apportioning the waters of the river. It was a crucial step in construction of Hoover Dam, which could not have been built without the states’ assent.

The compact stands as a landmark in the development of Los Angeles, San Diego, Denver, Phoenix and other Western metropolises. But it is also a symbol of the folly of unwarranted expectations.

That’s because the compact was built on a lie about the capacity of the Colorado River to serve the interests of the Western states — a lie that Westerners will be grappling with for decades to come.

The crisis of water supply from the Colorado is vividly represented by the so-called bathtub ring around Lake Mead, the vast reservoir behind Hoover Dam, showing how far below normal the water level has fallen.

As my colleague Ian James has reported, federal projections show that the risk is growing that both Lake Mead and Lake Powell, the reservoir behind Glen Canyon Dam, are approaching “dead pool” levels, below which water would no longer pass downstream through the dams.

The prospect has led to pressure from the federal government on water agencies in California and the six other basin states to drastically cut back on water use. So far, however, no agreements on cutbacks have emerged.

The ultimate danger is that Lake Mead reaches the “dead pool” stage. At the end of last month, Lake Mead was at 1,044.28 feet of surface elevation above sea level. That’s about 100 feet below its level in August 2003 and about 180 feet below its record elevation of 1,225 feet, reached in July 1983. When the level falls to 950 feet, the lake can no longer generate hydroelectricity. At 895 feet, the dam can’t release water downstream.

The long-term decline in Lake Mead’s capacity has been blamed mostly on global warming. But as I’ve reported before, the river’s enemies are both natural and man-made. It’s true that nature has placed the basin in a long-term drought. But human demands for water from the Colorado have far outstripped what it can provide — indeed, what it ever could provide.

That brings us back to the compact negotiations. The impulse for a high dam on the lower Colorado came largely from California — principally from growers in the Imperial Valley. They depended on the river for irrigation and desired a more reliable supply as well as flood control that could only be provided by a major dam.

Congress resisted approving the project unless the seven basin states of California, Nevada, Arizona, New Mexico, Colorado, Utah and Wyoming could agree on how to apportion the river among themselves.

The task of supervising the negotiations fell to Herbert Hoover, who was President Harding’s Commerce secretary. The process was contentious. The upstream states were painfully aware that California was the most voracious user of the river’s water even though it had the smallest acreage within the basin.

All were convinced that California, the most-developed state of the seven, was plotting to appropriate more than its share of the water to stoke its continued development at their expense. They were suspicious of Hoover, who though born in Iowa had made his home in California since becoming a member of the first graduating class at Stanford University in 1895.

Working with his deputy, Arthur Powell Davis — director of the U.S. Reclamation Bureau and a nephew of John Wesley Powell, the pioneering explorer of the Colorado and the Grand Canyon — Hoover overcame the states’ disagreements by promising that they all would receive enough water to provide for all their future economic growth.

They did this through connivance. Davis provided an estimate that the river’s annual volume averaged 16.4 million acre-feet. (One acre-foot, the equivalent of 325,851 gallons, is enough water to serve one or two average households today.)

That allowed the compact to be concluded with a guarantee that the upper basin states of Wyoming, Utah, Colorado and New Mexico could pass 7.5 million acre feet a year — measured as 10-year averages of 75 million acre-feet — to the lower states of California, Nevada and Arizona without sacrificing their own needs. All the states agreed on this formula except Arizona, which didn’t sign the compact until 1944.

(By then the state had all but gone to war with California over water rights on the river, dispatching a squad of National Guard troops to the river on a ferryboat to block construction of Parker Dam in 1934. The ferry was derisively dubbed the “Arizona navy” by a Times correspondent assigned to cover the skirmish. After the federal government imposed a truce, the guardsmen were reported to have returned home from the “war zone” as “conquering heroes.”)

The real flaw in the compact was no joke, however: Davis’ figure was a flagrant overestimate — as he certainly knew, having studied the Colorado for decades.

The 1899-1921 time span on which his figure was based was one of the wettest periods in the basin’s known history. Indeed, only four times since construction of Hoover Dam began in 1931 has the 10-year average reached 16.4 million acre-feet.

Current estimates place the average annual volume of the Colorado since 1906 at 14.7 million acre-feet; since 1991, the annual average is closer to 13.5 million.

Yet the portions of California and the West dependent on the river for their sustenance have grown as if its bounty is effectively limitless.

In 1935, President Franklin Roosevelt dedicated the dam from a podium overlooking the project, declaring that it had turned the willful river into “a great national possession.” Since that time, the population of the seven basin states has grown by more than 52 million, much of the growth fueled by the water and electricity the dam has provided.

For several decades, however, climate and hydrological experts have warned that there can be no soft landing from the restrictions that global warming are forcing upon the Colorado River’s historical beneficiaries.

Hard choices are becoming imperative. The federal government is effectively ordering that the basin states cut their water usage by 2 million to 4 million acre-feet a year.

Talk of draining Lake Powell to keep water in Lake Mead at a serviceable level is getting louder, notwithstanding the political and engineering obstacles standing in the way. Within basin states, especially California, water scarcity is exacerbating conflicts among growers, residential users and environmentalists.

The draconian cutbacks signaled by the federal government have been made necessary by inadequate action in the recent past.

As water and climate expert Peter Gleick told James recently, “If we had cut water use in the Colorado River over the last two decades to what we now understand to be the actual levels of water availability, there would be more water in the reservoirs today,” Gleick said. “The crisis wouldn’t be nearly as bad.”

The reckoning may have been long in coming, but it was inevitable. As long ago as 1893, John Wesley Powell — the uncle of Arthur Powell Davis, who perpetrated the foundational lie allowing the construction of Hoover Dam — foresaw the basin’s destiny.

Attending an irrigation congress in Los Angeles at which the coming paradise of water-driven growth was being proclaimed, Powell stood to deliver a hard truth. “I tell you, gentlemen,” he said, “you are piling up a heritage of conflict and litigation over water rights, for there is not sufficient water to supply the land.”

He was driven from the hall by a chorus of catcalls and boos, but time has proved him right.

Jameel Khan: My hold on my craft will always help me | Bollywood