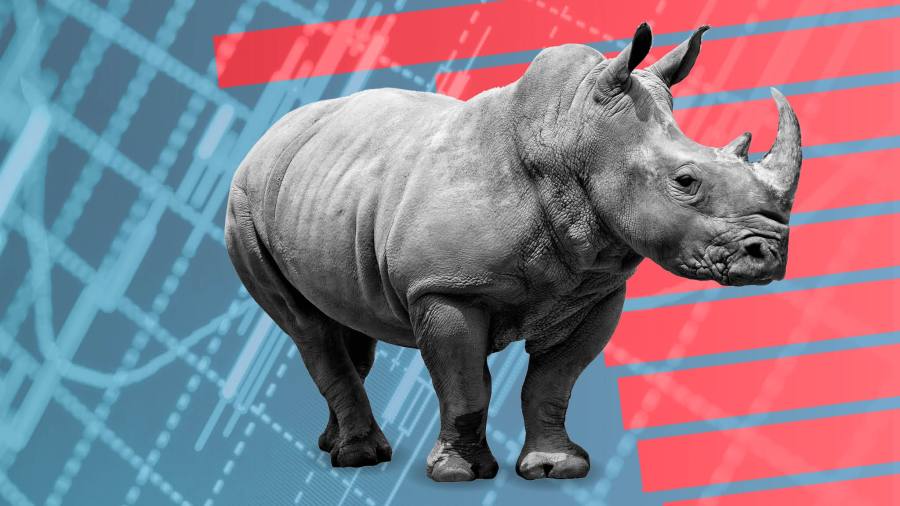 The latest shake-up in global equities has left investors wondering whether a switch in favour of an unloved corner of the market has finally arrived.

Stocks in Big Tech have been in huge demand since March, dominating indices with startling gains. But the revelation last week that Pfizer and BioNTech had scored a breakthrough in their hunt for an effective coronavirus vaccine sent stocks left behind in the pandemic era soaring.

The scale of the rotation to cheap “value” stocks from trendy “momentum” names was the most violent on record, eclipsing even the turmoil of the 2008 financial crisis or the bursting of the dotcom bubble.

“The numbers were absolutely astounding,” said Yin Luo, head of quantitative strategy at Wolfe Research. Analysts often use the term “black swan” to describe extreme and unforeseen events that cause financial-market ructions. But this upheaval, he said, was like a “grey rhino” — a large, obvious scenario that is easily ignored until it suddenly charges.

The rotation did not end last week. Instead, it picked up pace again this Monday after US biotech group Moderna said its vaccine was 94.5 per cent effective in a late-stage trial. Now with an end to the pandemic crisis in sight, some investors and analysts think vaccines may be the long-heralded catalyst for a durable shift into value stocks — modestly priced securities that are typically found in economically sensitive industries.

Value investing has been struggling for more than a decade, as sluggish growth and battered-down bond yields pushed investors into racier, faster-growing stocks, primarily in US technology. As a result, the five biggest members of the S&P 500 are now all tech stocks, and are together worth more than $7tn — almost twice as much as global banks and energy companies tracked on MSCI’s All-World indices combined.

Even after last week’s decline, “growth” stocks are still up by more than 25 per cent this year, and have climbed 225 per cent over the past decade, according to MSCI’s global index. Meanwhile, value stocks have lost 7 per cent in 2020 and have gained only 88 per cent in the last 10 years.

As a result, growth stocks now trade at an average price-to-earnings ratio of 38 times — compared with the 47 times peak at the height of the dotcom bubble in 2000 — while value stocks trade a PE ratio of 17 times, Citigroup analysts note. That disparity is even greater than in the early-2000 record.

Citi’s chief US equity strategist Tobias Levkovich said that last week was a turning point, listing a host of reasons why he thought the growth-to-value rotation would gather steam: the likelihood of more vaccines coming out soon; corporate earnings improving next year; faster growth, quicker inflation and rising bond yields; and the sheer extent of Big Tech’s current dominance — something that has historically never lasted.

Yet Mr Levkovich admits that many investors will be sceptical, after a decade of growth trouncing value and a host of badly timed predictions of a reversal, which have created “a kind of ‘boy who called wolf’ mentality”, he wrote. “The Street tends to be a trend follower as opposed to a trend setter, though the set-up is as good as it has been.”

Value is the oldest and best-known factor, tracing its genesis to work by Graham and Dodd in the 1930s. It refers to the tendency for relatively cheap securities to outperform relatively expensive ones, as many investors wrongly prefer the glamour of ‘growth’ stocks.

Momentum predicts that assets with a positive trend tend to continue to do well, and those that are falling continue to slide. Most academics say the phenomenon is rooted in human psychology and how we initially underreact to news but overreact in the long run, or often sell winners too quickly and hang on to duds for too long.

Quality is powered by the idea that lower-risk, safer companies tend to do better than racier, more indebted peers. The factor is often attributed to how investors systematically overpay for stocks with seemingly better prospects, but underappreciate ones with boring but defensive business models.

Volatility is based on the observation that, contrary to widespread opinion, stolid stocks with typically muted movement actually tend to outperform more volatile ones over time.

Size captures the tendency of smaller stocks to do better than bigger ones in the longer run, possibly because they are less glamorous, harder to research and riskier.

Rob Arnott of Research Affiliates is wary of calling the vaccine a turning point, but argues that last week’s renaissance was encouraging. “When valuations are extreme, turns become inevitable, and a small shift in sentiment is often all it takes to initiate a swing of the pendulum from extreme fear to extreme euphoria,” he said.

However, the severity of last week’s rotation was probably exacerbated by an evolution in how the finance industry sees and trades the stock market.

Historically, investors divided it up into discrete industries, such as energy, banks, retailing or technology. Increasingly, however, they now look at it through the prism of “factors”, quantitative measures of a stock’s characteristics that financial academics have discovered tend to lead to above-market gains in the long run. Unlike sectors, factors are not set in stone. Companies or entire industries can migrate from one bucket to another over time, and may overlap and fall into several at the same time.

Analysts say momentum stocks had become extremely extended this year, powered overwhelmingly by the ebullient run of US tech stocks. This meant that any reversal was likely to be ferocious.

Even Mr Luo, who earlier this month had highlighted the possibility of an imminent “drastic value rally”, is sceptical that the rebound will be sustained, given the still-murky economic outlook and likelihood of bond yields remaining subdued — a fillip for growth stocks.

Indeed, some dedicated growth investors are unfazed by last week’s mayhem. James Anderson, a partner at Baillie Gifford, said he would not be surprised if value stocks continued to outperform this year. Yet he argues that most investors are still underestimating the creative destruction currently under way in the business world.

“I’m not sure a lot of these companies held up as value aren’t going to disappear,” he said.

Christian priests to take out march against ‘discrimination’ in Kerala

Manufacturing orders from China down 40% in demand collapse