How comics fan our culinary imagination 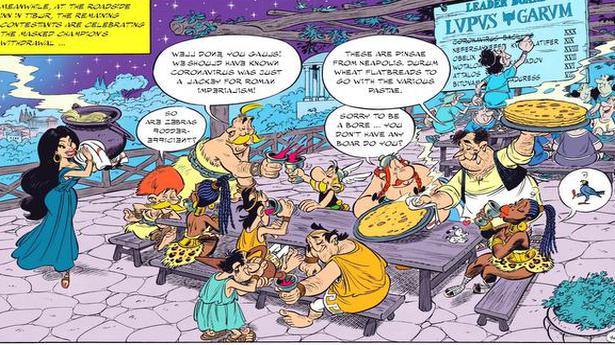 One of the best things about the Asterix comic book series is the food that the brave Gaul’s healthy friend, Obelix, eats in every adventure. He holds a barbecued boar dripping with fat, just off the fire, and then proceeds to demolish it.

I was happy to see that the last page of a new release — Asterix and the Griffin, created by Jean-Yves Ferri and Didier Conrad — had that old familiar scene of the Gauls gathered around a table for a feast. Cacofonix has been tied up and gagged. And Obelix is holding up a plump wild boar.

Comics, clearly, fan our culinary imagination. Much before I ate a burger, I had seen illustrations of it in Archie comics. There it was, looking splendidly juicy, in Jughead’s hands. Blondie comics worked for me because of the sandwich that Dagwood was often shown assembling: a stack spilling over with slices of ham, other meats and cheese. And, of course, Dennis the Menace had his peanut butter and jelly sandwiches.

Just like photograph-filled cookbooks, many comic books add flavour to food. I recently came across a book called Let’s Make Dumplings! by Hugh Amano and Sarah Becan. It opens with a sketch of dumplings of various shapes, some of them in a bamboo steamer of the kind we often use, and accompanied by hot sauce. “We’d be hard pressed to name a culture in the world that doesn’t have something that could be called a dumpling,” says chef and writer Amano.

The book tells the story of the pharmacist Zhang Zhong Jing from the Eastern Han dynasty of China, who came across a group of impoverished people huddled together in the bitter cold, and decided to ease their pain by cooking something hot and nutritious. He prepared a hot mutton broth and shaped some dough into dumplings, which he boiled in the broth. Those may well have been the first dumplings ever.

There’s a lot to learn from comics. I was surprised to find that chef Anthony Bourdain has written great comic books. His graphic novel, Get Jiro (co-written with Joel Rose), for instance, is about a sushi chef in a dystopian future world entirely dominated by food. “Chefs are the new power,” it says.

Bourdain’s and Rose’s Hungry Ghosts: Tales of Fear and Food from around the World has stories about food, hunger and all kinds of spooky spectres. A game is being played at a dinner table, based on the Samurai game ‘100 candles’, where chefs have to narrate a bloodcurdling tale — the eerier the better — to survive. To lighten up the narration, there are five recipes at the end — including one for pan-seared duck breast with red cabbage and one for saffron risotto (cooked with rice, saffron, chicken stock, onion, parmesan, olive oil, white wine and butter).

Another mouthwatering comic book is Relish: My Life in the Kitchen by Lucy Knisley. She tells us how she grew up in a foodie household (her parents can’t recall how old she was when she was baptised, but remember that she had poached salmon in cream), exchanging food stories with friends and family. She writes about eating croissants in a tiny Venice bakery; her mother’s stacked enchiladas with homemade mole, queso fresco, green salsa and black beans; and the worst meal she’d ever had — cooked by her friend, Mark. With comic-style illustrations, the book has recipes for masala chai, fresh pesto, carbonara, grilled lamb and other delicacies.

For barbecued wild boar, though, you need to go back to Asterix and Obelix. The first words Obelix utters in the new book are promising. Our heroes are in Barbaricum — “a vast frozen steppe wreathed in fog”. Asterix is lost in fog and the druid has caught a terrible cold. “I’m hungry,” says Obelix.

Rahul Verma likes reading and writing about food as much as he does cooking and eating it. Well, almost.

Denial of responsibility! Pedfire is an automatic aggregator of the all world’s media. In each content, the hyperlink to the primary source is specified. All trademarks belong to their rightful owners, all materials to their authors. If you are the owner of the content and do not want us to publish your materials, please contact us by email – admin@pedfire.com. The content will be deleted within 24 hours.
Anthony BourdainArchie ComicsAsterixcookbooksDagwoodDennis the MenacedumplingsLucy Knisley
0
Share

Luma Arles is a towering achievement for Frank Gehry

Recipes that taste as good as they make you feel