How the pearl became jewel of the century 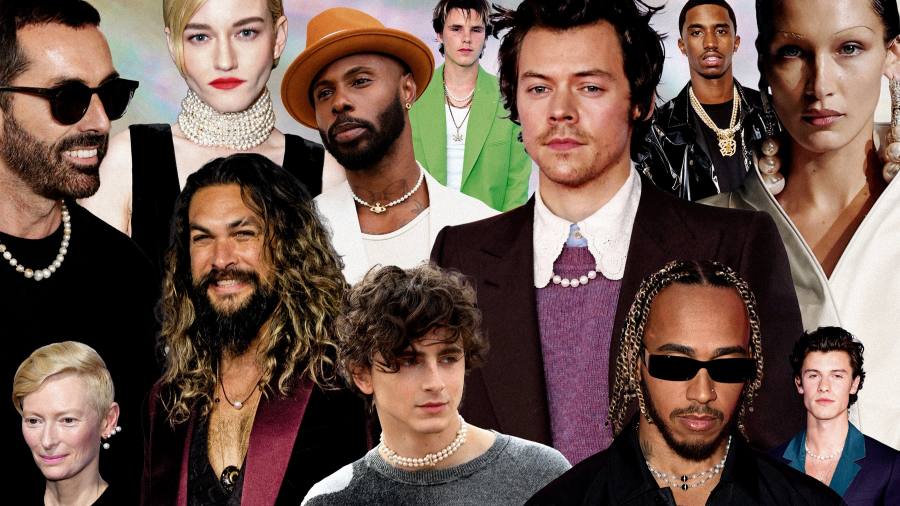 There’s no getting away from pearls. They’re on the red carpet. They’re on the street. In nightclubs and in day spas (even in beauty, “pearlescent” is the boast du jour). Timothée Chalamet is wearing them. That guy on the underground too. Some years after they gained their 21st-century edge, the most fashion-forward woman you know is still working them – albeit with a new twist.

And just when it seems as if we must, surely, be at the crest of the wave, momentum builds again. On the runways, they’re snaking around shoes and in hair, adorning eyebrows, bags and buttons. On Liberty’s website they now rank equal to chains in terms of jewellery searches by London customers (in a twist no one saw coming, the two are now considered almost interchangeable). And, despite their omnipresence, when actress Julia Garner arrived at Gucci’s SS23 show wearing a 12-string pearl necklace layered right up her neck with a cutaway velvet jumpsuit – her “Hollywood tomboy” – the ensuing commotion proved that pearls, even the faux variety, are still capable of creating a moment. “I must have had about 300 messages when I looked at my phone – all versions of ‘Tell me about that necklace!’” laughs Elizabeth Saltzman, Garner’s stylist and a self-confessed “pearls girl”.

Why hasn’t the pearl lost its lustre? It’s not all down to the cosmic powers of Harry Styles’s right lobe. London-based Greek designer Melanie Georgacopoulos made them her niche at design school because “their potential seemed so untapped”. Her decade-long partnership with Japanese fine jewellers Tasaki, one of the world’s biggest producers of Akoya pearls, is widely recognised as a catalyst for pearls’ (literally) cutting-edge repositioning, slicing, splicing and dipping them in gold. “Even I am amazed that this wave just keeps growing,” she says.

“Generation Z has leapt on this versatile gem that is flattering to everyone, and easy to customise to any look and personality – I don’t see them letting it go,” says fine jewellery expert Josephine Odet, a curator and adviser to vintage jewellery platform Omnēque, who has two decades’ experience working with auction houses, jewellers and designers, and sourcing for private clients. She believes we could be witnessing the “bedding in” of the gem for our times. “There are so many touch points: sustainability, accessibility [there are degrees of preciousness], the fact that you can rework cultured pearl pieces quite easily and inexpensively… Meanwhile, the market for natural pearls hasn’t cooled at all. I just don’t see it waning.”

The all-out embrace as “a gem for everyone” is in itself a long overdue correction. Pearls were worn by 14th- and 15th-century male royals and nobles and the maharajahs as symbols of power. At the turn of the 20th century, they were “feminised”: the writer George Frederick Kunz declared that the diamond was the king of gems and the pearl was the queen, and it fuelled the symbolism of modesty and purity. Odet cites Honolulu-born Jason Momoa, who wears a pearl like an amulet on a leather necklace and sometimes sautoir-length strands. “In many cultures men have always worn pearls every day, but people with that big profile have pushed it back to the surface of popular consciousness.”

Each pearl is as unique as a fingerprint inside

Where men once wore pearls in an elevated way on lapel pins or the odd single earring, it’s now common to see them wearing a string of them as part of a laidback look – led by the example of Styles and Pharrell Williams. “Men can see that pearls look good whether you’re young or older,” says Saltzman. “If you look at Giambattista Valli, who’s always worn a pearl necklace every day – it’s cool, it doesn’t look like he’s working too hard, it just looks like he knows himself.”

It helps that pearls, while a jewel-like accent, are naturally understated. Their association with mourning came from Queen Victoria, who eschewed coloured gems after Prince Albert’s death, so their prevalence could be read as a hard pivot away from bling. But the pearl is also a perfect emblem for individuality – and the search for meaning. “If you slice through a pearl, each one is as unique as a fingerprint inside,” explains Georgacopoulos. What’s more, the colours can be quite subjective – Tahitian and South Sea pearls, for instance, may have a peacock tinge, or greyish, or blue – so picking a pearl represents a deeply personal choice.

But it’s pearls’ connection to nature that makes them such a power player for the future. “The natural ones were overfarmed, and lessons were learned,” says Odet. “Now clients think of cultured pearls as a feelgood purchase because the farms, relatively speaking, are low-impact; and because the oyster nuclei are re-grafted, it’s not plundering nature.”

“To have good-quality pearls you have to have a clean, stable marine environment,” adds Georgacopoulos, explaining that cultured pearls stay in the water for up to 18 months. “You’re not drilling and extracting from the earth or pumping in chemicals.” The by-product mother-of-pearl, which is increasingly being explored by Bibi van der Velden and Garrard, among others, also looks likely to gain in desirability.

Anissa Kermiche gold-plated silver and pearl Grab Them By The Balls earring, £165

In the new M/G Tasaki Wedge collection, the pearls are quartered, explains Georgacopoulos. “For so long, rough diamonds have been taken from the earth, faceted and polished, and yet there’s this idea that pearls should be kept intact and unadulterated. Doing otherwise is still controversial, but it’ll be interesting to see if that changes.”

A sense of adventure is coming, though. It’s in Sonia Cheadle’s spinning faceted Tahitian pearl ring and Sophie Keegan’s kinetic Pearl Bobble ring; in the sassy designs by Pearl Octopussy and Completedworks; and in Anissa Kermiche’s Grab Them By The Balls single earring. Yoko London has a convertible choker with drop pearls that can be removed, and is planning its first dedicated men’s collection. Meanwhile, black pearls, often inky-blue and excellent for evening, are on the make. One thing’s for certain: the jewels of the sea are not going back into their shells.

Salman Khan to be a part of Ajay Devgn’s Bholaa universe? Deets here

World Cup: Why Arsenal and Liverpool will be cheering on Brazil and England | Football | Sport