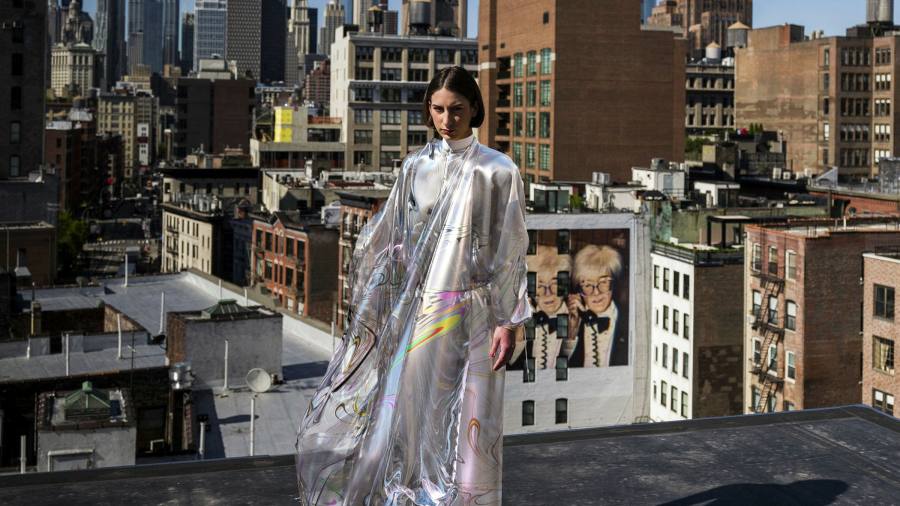 Sign up to myFT Daily Digest to be the first to know about Fashion news.

Who would spend thousands of pounds on something that can’t be worn in real life? More people than you’d think. The frenzy over non-fungible tokens (NFTs) is extending to fashion, and it’s creating a market where shoes and dresses that only exist as digital files sell for couture prices.

NFTs are digital assets connected to blockchain ledgers that give buyers and sellers proof of ownership and provenance. Unlike an image that can be endlessly circulated online without belonging to anyone, an NFT is a digital-only item that can be traded much like a real-life artefact. It’s simplest to understand if you think about the parallels with analogue art: a print of the Mona Lisa might look indistinguishable from the Leonardo da Vinci masterpiece, and a screenshot of an NFT artwork might seem identical to the original — but in either case, a collector would treat them differently, because the artwork being a certified original is what makes it valuable.

Following in the footsteps of the fine art world — which saw a digital work by the artist Beeple sell for $69.3m in March — new fashion companies are springing up to capture their own corner of the NFT market.

One of the first on the scene was The Fabricant, a digital fashion company that sold an NFT dress, featuring iridescent shimmery fabric worn over silver trousers, for $9,500 in 2019. In March, after a year of lockdowns that pushed society in an ever-more-digital direction, streetwear-focused brand RTFKT sold $3.1m worth of digital sneakers in just seven minutes in a collaboration with 18-year-old artist Fewocious. RTFKT used that momentum to secure $8m in venture capital funding in May. And BNV, a retailer that fancies itself “the Farfetch of digital fashion,” sells the digital equivalents to both new and second-hand clothes, allowing customers to search for newly minted NFTs while reselling their old ones. Launched in 2016 as a fashion tech R&D outfit, the company pivoted to NFT retailing in 2019.

“As we spend more time in virtual worlds, we will care just as much about our digital sneakers and handbags as we do our physical ones,” Jon Lai, an investor in RTFKT, tweeted in May.

Established luxury players are also joining in in a bid to court younger, digitally savvy consumers, although their NFT products don’t necessarily come in the form of digitally wearable goods just yet. Gucci sold a video NFT based on its autumn/winter 2021 collection film for $25,000 in June, and Burberry and Louis Vuitton each announced in August that they would be launching NFTs connected to specific video games, the former in partnership with a game called Blankos Block Party, the latter via a game created by Louis Vuitton featuring original Beeple creations.

None of this may be surprising to those familiar with the world of gaming, where players already spend millions of dollars on in-game “skins” for their avatars to wear. As in the real world, players can purchase anything from cheap looks to luxury designs.

But digital fashion’s proponents say it’s coming for even those who don’t play Fortnite. Simon Windsor is the co-founder and joint managing director at Dimension, an agency that helped Balenciaga unveil its Autumn/Winter 2021 collection in the form of a video game. Windsor says it’s a “natural extension” of altering one’s appearance on Instagram, Snapchat or TikTok via filters.

Right now, though, most NFTs don’t seamlessly connect to social media profiles or video games, which means that they usually can’t actually be “worn” like a gaming skin or Instagram filter. Their appeal is currently strongest with those who have embraced cryptocurrencies and pride themselves on being at the forefront of technology. Owning NFT fashion is a bit like owning a painting that you keep in a safe, but with the expectation that someday you’ll be able to display it where others might see it.

According to BNV team member Simone Berry, it’s about preparing for a future in which we all spend more time in the metaverse, a sort of convergence of digital worlds where increasing amounts of our work, play and social lives take place virtually. Considering that the average amount of time spent online doubled in 2020, that world feels closer than ever — people are increasingly shopping, working, falling in love, going to church and playing games with friends online, and it’s not hard to imagine that trend accelerating further in the coming years. In spaces where online participation happens through some sort of avatar or image of ourselves, digital fashion is sure to follow.

The technology that will allow NFTs to be worn in that digitised future is coming, says Berry: “It’s like you’re packing for a trip and you’re buying all the things that you will need in your virtual world. It’s not available just yet, but you know you’re taking that trip.”

Berry points to the digitisation of clothing as a solution to fashion’s environmental and social issues, since it eliminates the need to produce fabric, run factories or ship materials all over the world. But the reality is not so simple. NFTs run on blockchains that consume massive amounts of energy due to how much computing power they require. They can still have large — if hidden — environmental footprints.

Alex de Vries, a data scientist who runs the site Digiconomist, cautions against looking to NFT fashion as a way to shrink the industry’s impact. While a polyester T-shirt might have a carbon emissions impact of about 5.5kg, according to the World Resources Institute, De Vries calculates the footprint of an NFT garment like a simple white dress as emitting closer to 600kg of carbon dioxide. That’s equivalent to burning 663 pounds of coal, according to the Environmental Protection Agency’s Greenhouse Gas Equivalencies Calculator. Plus, an NFT generates more emissions every time it’s bought or re-sold.

The good news is that it’s possible to create blockchains that use far less energy, and NFTs connected to these will have much smaller footprints as a result. For digital-first brands wanting to shape the future, there’s no reason not to push the trajectory in a more ecologically viable direction, especially considering how little in the field is set in stone.

NFT fashion is so nascent that it’s hard to know what exactly it will mean for the average person in years to come. But considering the opportunity that NFTs offer for ownership and exclusivity in the digital realm, and the way the digital world is becoming more and more enmeshed with the physical one, NFTs could offer a natural evolution for luxury goods in the future.

“NFTs feel a bit like the Wild West of fashion right now,” says Windsor, “but I think they will naturally find their place in time. There’s a real buzz and excitement around them.”

Cathie Wood is more optimistic than pessimistic about China

Our IPO will provide bountiful rewards to employees: MobiKwik