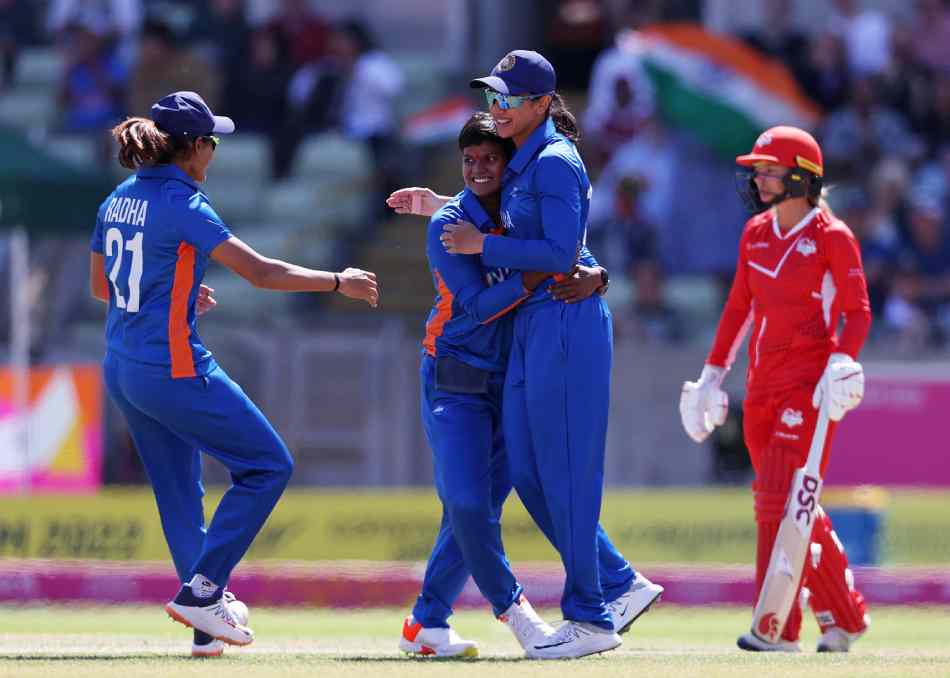 In the final, they will either face Australia or New Zealand a couple of days down the line.

As a result, at least a silver medal is assured for India in their maiden outing in a global competition like Commonwealth Games.

Driven by Smriti Mandhana’s fifty and a handy knock Jemimah Rodrigues, India made 164 for 5 and the restricted England to 160 for 6 to celebrate a memorable win.

Earlier, Mandhana’s elegant yet brutal knock of 61 along with Jemimah Rodrigues’ useful 44 not out powered India to a healthy 164 for 5.

Mandhana’s 32-ball assault in the Power Play laid the platform while Rodrigues, who is finally doing justice to her enormous potential, improvised well during his 31-ball unbeaten stay at the crease.

A new and improved Deepti Sharma chipped in with 22 off 20 balls but India might think they ended 15 runs short of the par-score after 64 runs came in the six Powerplay overs.

The next 14 overs yielded 100 runs as India lost the momentum when three wickets fell in quick succession during middle overs.

Rodrigues and Deepti added an invaluable 53 runs for the fourth wicket partnership.

Mandhana’s drives are the most picturesque thing in women’s cricket and one would rub his eyes in disbelief when the normally rampaging Shafali Verma (17 off 15 balls) was the silent partner in their opening stand of 76 in 7.5 overs.

There were cover drives off Katherine Brunt, pulled sixes off seamers Natt Sciver an Issy Wong and a lofted one of spinner Sarah Glenn’s bowling over long-on. The half-century came in only 23 balls as England bowlers looked clueless during that phase.

Once Sciver got rid of Mandhana, who was trying to play the lap-scoop, the run-rate slowed down as skipper Harmanpreet Kaur, despite a couple of fours and a six, played few dot balls in her run-a-ball 20.

While Mandhana had eight fours and three sixes in her knock, Rodrigues had seven fours to her credit, mostly using the gaps in arc between point and extra-cover.