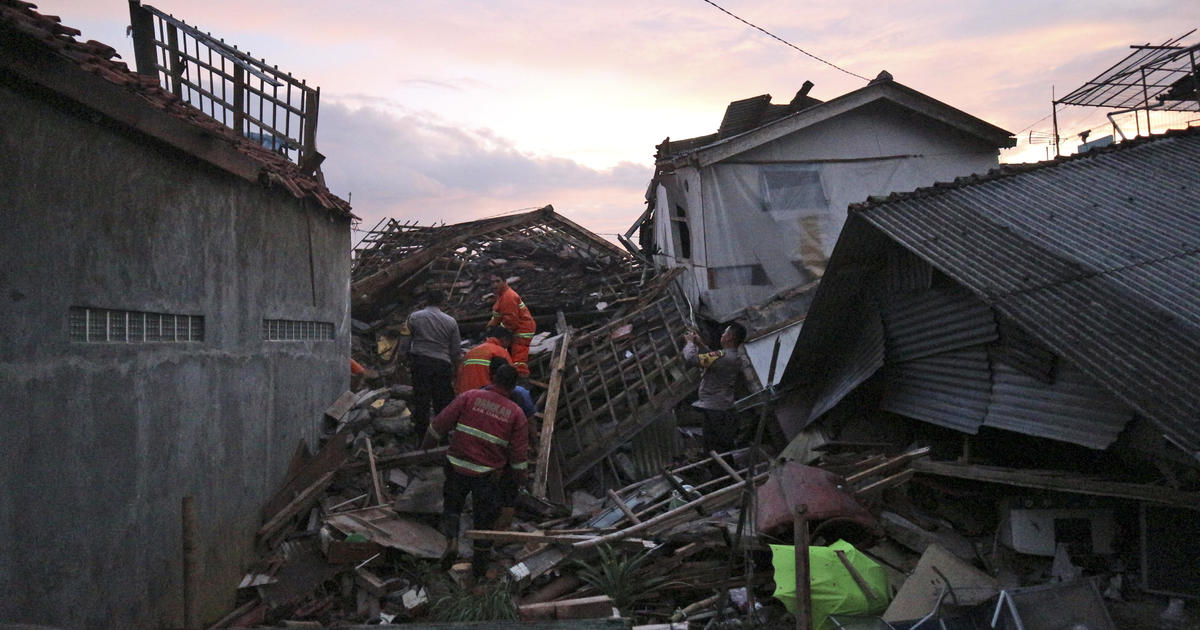 A powerful earthquake killed at least 162 people and injured hundreds on Indonesia’s main island on Monday. Terrified residents fled into the street, some covered in blood and debris.

Many of the dead were public-school students who had finished their classes for the day and were taking extra lessons at Islamic schools when they collapsed, West Java Governor Ridwan Kamil said as he announced the latest death toll in the remote, rural area.

“I regret to inform that 162 are dead. 326 are injured with most of them sustained fractures from being crushed in ruins,” Kamil told a press conference in a video seen by AFP. He said most of the victims were children.

Hospitals were overwhelmed by injured people, and the toll was expected to rise further. No estimates were immediately available because of the area’s far-flung, rural population, but many structures collapsed, and residents and emergency workers braced for grim news.

“Buildings were completely flattened,” said Dwi Sarmadi, who works for an Islamic educational foundation in a neighboring district.

Roughly 175,000 people live in the town of Cianjur, part of a mountainous district of the same name with more than 2.5 million people. Known for their piety, the people of Cianjur live mostly in towns of one- and two-story buildings and in smaller homes in the surrounding countryside.

Kamil said that more than 13,000 people whose homes were heavily damaged were taken to evacuation centers.

Authorities said 25 people remained trapped under the rubble as the rescue mission stretched into the night.

“You can see it yourself, some got their heads, feet sewn outdoors. Some got stressed and started crying,” Kamil said.

Emergency workers treated the injured on stretchers and blankets outside hospitals, on terraces and in parking lots in the Cianjur region, about three hours drive from the capital, Java. The injured, including children, were given oxygen masks and IV lines. Some were resuscitated.

Hundreds of people gathered outside the Cianjur regional hospital building, waiting for treatment

“I was working inside my office building. The building was not damaged, but as the quake shook very strongly, many things fell. My leg was hit by heavy stuff,” Sarmadi said.

Sarmadi was waiting near a tent outside the hospital after some overwhelmed clinics were unable to see him. Many people were coming in worse shape.

“I really hope they can handle me soon,” he said.

Hasan, a construction worker who, like many Indonesians, uses one name, is also one of the survivors that is being taken to the hospital.

“I fainted. It was very strong,” said Hasan.

“I saw my friends running to escape from the building. But it was too late to get out and I was hit by the wall.”

Residents, some crying and holding their children, fled damaged homes after the magnitude 5.6 quake shook the region in West Java province in the late afternoon, at a depth of 10 kilometers (6.2 miles). It also caused panic in the greater Jakarta area, where high-rises swayed and some people evacuated.

In many homes in Cianjur, chunks of concrete and roof tiles fell inside bedrooms.

Shopkeeper Dewi Risma was working with customers when the quake hit, and she ran for the exit.

“The vehicles on the road stopped because the quake was very strong,” she said. “I felt it shook three times, but the first one was the strongest one for around 10 seconds. The roof of the shop next to the store I work in had collapsed, and people said two had been hit.”

Several landslides closed roads around the Cianjur district. Among the dozens of buildings that were damaged was a hospital, the agency said. Power outages were reported.

“The quake felt so strong. My colleagues and I decided to get out of our office on the ninth floor using the emergency stairs,” said Vidi Primadhania, a worked in the capital, where many residents ran into the streets and others hid under desks.

The country of more than 270 million people is frequently struck by earthquakes, volcanic eruptions and tsunamis because of its location on the “Ring of Fire,” an arc of volcanoes and fault lines in the Pacific Basin.

A powerful Indian Ocean quake and tsunami in 2004 killed nearly 230,000 people in a dozen countries, most of them in Indonesia.

AFP contributed to this report.

Denial of responsibility! Pedfire is an automatic aggregator of the all world’s media. In each content, the hyperlink to the primary source is specified. All trademarks belong to their rightful owners, all materials to their authors. If you are the owner of the content and do not want us to publish your materials, please contact us by email – [email protected]. The content will be deleted within 24 hours.
AsiaEarthquakeIndonesiarescue
0
Share

Jay Leno released from the hospital after burn injuries

The Jack Kamen Issues That Got Blue Beetle Banned, Up for Auction