Inflation comes to the catwalk . . . 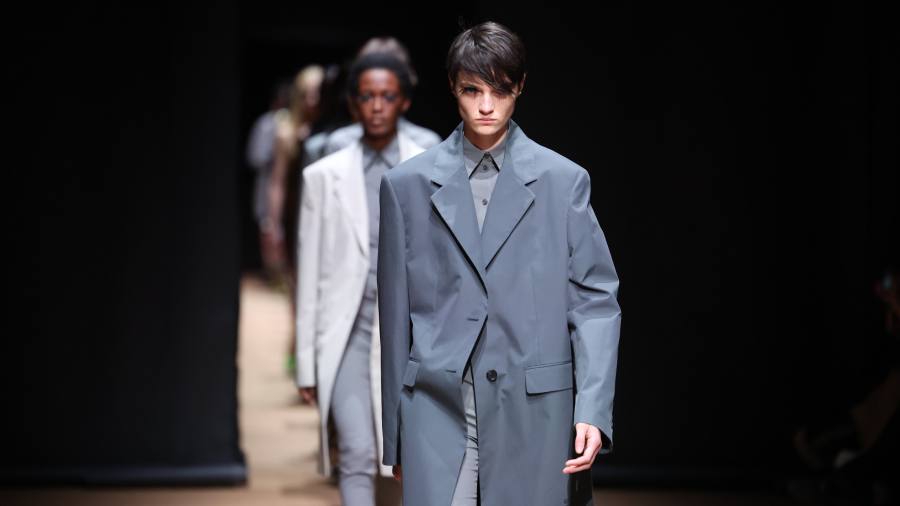 Prada has had a remarkable turnround over the past three years, which it owes partly to Raf Simons, the former Calvin Klein designer it hired as co-creative director on the eve of the pandemic — as well as to a much-improved digital communications strategy. Sales were up 22 per cent year-on-year to €1.9bn in the first half of 2022, exceeding market expectations.

Can Prada keep the magic going? Its latest show in Milan, titled “Touch of Crude”, suggests that it can: the designers lined the walls of their showspace at the Prada Fondazione in black craft paper punctured with windows, behind which moved luridly lit images of interiors shot by Nicolas Winding Refn, director of the 2011 film Drive.

Adding to the eeriness were the clothes themselves: wool boiler suits in industrial grey, some topped with boxy coats or blazers, and graphite- and bark-coloured knit jumpers and pencil skirts sharply creased at the elbows and hips as if they had been worn for weeks. Swathes of paper-like fabric trailed dresses and blazers, and moto-style jackets and pencil skirts were cut from distressed black leather.

The most memorable pieces were the sheets of dyed silk tacked on to dresses — the bleeding edges of the dye were left exposed on the garment, and thigh-high slits were ripped into the fabric rather than cut and sewn. In their show notes, Simons and Prada said they wanted to reflect “a sense of the hand, a touch of the crude, a rawness that evokes fragility”.

Playing on the other definition of “crude” were pastel jumpers and long, narrow skirts sheer enough to show the models’ underwear beneath — but in a season of so much exposed skin, they looked relatively demure.

Industry watchers look to Prada perhaps more than any other show to see where fashion is heading next, and this collection hinted at a shift to a quieter luxury — one that is subtler and less decorative.

Designers are now expected to weave social or political statements into their collections, such as the war in Ukraine or the overturning of Roe vs Wade

Colours were similarly muted at Tod’s, where designer Walter Chiapponi mixed svelte brown suede dresses and aubergine-coloured leather coats with sporty canvas jackets and khaki trousers. The brand has continued to underperform the luxury market in spite of Chiapponi’s aesthetic reboot, which has established the brand in ready-to-wear and ushered in an array of new handbag and shoe styles, many stamped with a gold “T”. Earlier this week, Italian market watchdog Consob approved founder Diego Della Valle’s bid to take the group private where, one hopes, its fortunes will improve.

At Gucci, financial analysts have been waiting for the magic to stop for years. Its ascent under creative director Alessandro Michele and chief executive Marco Bizzarri was so steep and swift — sales last year amounted to €9.73bn from €3.5bn in 2014, making it one of the sector’s three highest-grossing brands — that a fall has seemed inevitable.

The fact that it hasn’t fallen is largely due to good marketing and a seemingly endless arsenal of creative ideas from Michele. His show in Milan delivered again. Giving it the title “Twinsburg”, he wrote in his show notes about having “two mothers” — his mother is a twin, and instilled in him an “eternal fascination for the double”.

What that had to do with the collection was not immediately clear. Models walked out in a succession of highly individual looks that drew from east and west, high fashion and folkloric costume: neatly tailored skirt suits cut from a print of wrenches and missiles, red sequin pyjamas and cheongsam dresses, prairie skirts and platform wooden clogs, paisley-print flares and woollen blazers. Social media catnip in the form of gremlin dolls were tucked into and latched to handbags with saddle-shaped flaps; one was worked into the fabric of a sapphire blue evening dress.

The connection with twins became clear midway through, when the the show’s photographic backdrop was cranked up to the ceiling, revealing that an identical show — shown on identical twin models — had been taking place on the other side. The models then took another lap down the runway for both audiences, this time hand-in-hand.

Twins, Michele wrote, “are well aware of not being at the centre of the universe”, and that twinship shows us “the sense of co-belonging and sisterhood that should guide our trip through this planet”. At a time of war and political division, Michele appeared to want to remind the audience that we as humans are thoroughly alike, sharing, in his words, a “common creatural destiny”.

In recent years critics and audiences have come to expect designers to weave social or political statements into their collections — the overturning of Roe vs Wade and the war in Ukraine being recent examples.

Jeremy Scott took up that challenge head-on. “Everyone has been talking about inflation — housing, food, gas,” the American designer observed before his show for the Italian label Moschino. “So I brought inflation to the runway!”

It was a thoroughly camp take: air was pumped into inflatable collars, lapels, pockets and boots; the peplum of a trim rubber-duck-yellow sheath dress was moulded into the shape of an inflatable ring (finished with handles on the shoulders), floor-length evening dresses were stacked with colourful pool floaties. Topping these confections were hats in the shape of life preservers courtesy of the milliner Stephen Jones. It was a fun, and funny, subversion of the cultural heft that fashion designers are now expected to wield. Scott believes quite simply that his role is to spark optimism and joy. “I think myself and a lot of other people feel we’re drowning in negativity and delusion [right now],” he said.

Is he worried about inflation affecting his business? “A little,” Scott replied. “It makes everything hard for everyone.”

‘Double XL’ is for everybody who dares to dream ‘big’

New shopping mall opens in Gauteng – and has a shooting…

Do COVID-19 vaccines help keep you from going bald? | Health…

Escobar rallies Mets past Marlins in 10, back into 1st alone