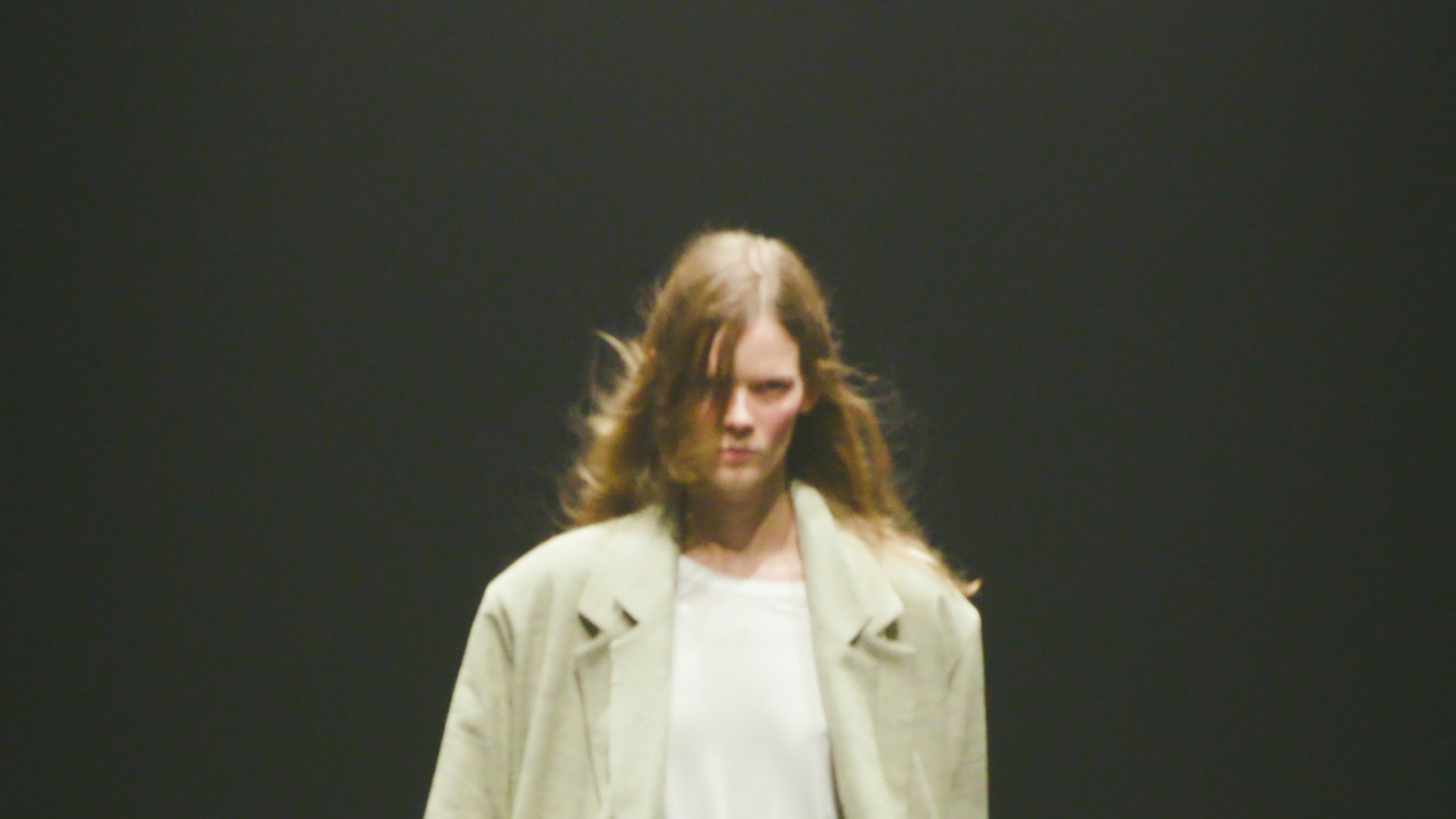 The distraught socialites on the catwalk of Interior’s first show looked ready to snap. Their frenetic walk (perfected by movement coach Julia Crockett), their suits with distressed hems, and their way of clutching the thighs of their pants and dresses so they didn’t hit the floor came together to paint a portrait of glamorous angst. A coterie of Patrick Bateman’s escaped victims.

Or, make that Edward Rochester’s escaped victims, as Bertha Mason and her ilk are perennial inspirations for designers Lily Miesmer and Jack Miner. “She probably just has anxiety, and they’re like ‘You’re hysterical, go live in the attic.’” Miesmer said backstage. Distress—both mental and physical—was a driving force in the show, down to the Pixies hit “Where Is My Mind” playing during the finale. Miesmer and Miner still found plenty of ways to riff on the staples of Park Avenue princesses: shirt dresses (but with voluminous trains), cozy cashmere knits (but with an unraveling crop), double breasted suits (but with raw edges and flyaway strands of fabric on the hems) and ballet flats (but actual ones used by ballerinas, sourced from Miesmer’s favorite dance store). Classic, almost preppy affluence is at the core of Miesmer and Miner’s designs, but this season there was something rotting underneath—and they’d take that as a compliment.

“That’s how specialness showed up this season. In the past it was embroidery and embellishment; this season it was destruction,” Miner said. “There’s an audacity in destroying the most beautiful cotton fiber, yarn, cashmere, and layers of chiffon and lace,” Miesmer added, referring to how she and Miner took power tools and horse brushes to the textiles to give them the exact right effect. Not my-jeans-just-happen-to-be-ripped distressed, but “lived-in in an unhealthy way,” per Miesmer. That said, they tried to know where to stop in order to keep it appealing to a luxury customer; few people want to buy something totally destroyed, and brands in the past have been mocked for treading too close to that line.

There are elements that went a bit too far and thus felt related to the indie sleaze revival, including a ripped red t-shirt and lace up skinny pants. However, Miesmer—who lived through that era in New York—is quick to distance Interior from that idea and the figures who defined the times. “I think it’s so problematic and it was a terribly fraught time in fashion and in New York,” she said. “But the charming elements of indie sleaze to me are repurposing things like riding boots and ballet flats and wearing them.”

The fun of Interior is how they distort the prissy, the stuffy, and the basic. Their first collection was filled with clothes that would look at home at a dinner party, but since then, Miner and Miesmer have incrementally added a sinister undercurrent. A pink strapless ruched cotton jersey top with a swishy cotton gauze skirt is a prime example. It would’ve looked right at home on one of Degas’s models, but the hem is more muted than the top, suggesting frequent wear, and the waistband is folded down. She’s not a prima ballerina; she’s the last one standing in a horror movie. Good for her.

Denial of responsibility! Pedfire is an automatic aggregator of the all world’s media. In each content, the hyperlink to the primary source is specified. All trademarks belong to their rightful owners, all materials to their authors. If you are the owner of the content and do not want us to publish your materials, please contact us by email – [email protected]. The content will be deleted within 24 hours.
Interiorrunwayrunway_reviewSpring 2023 Ready-to-Wear
0
Share