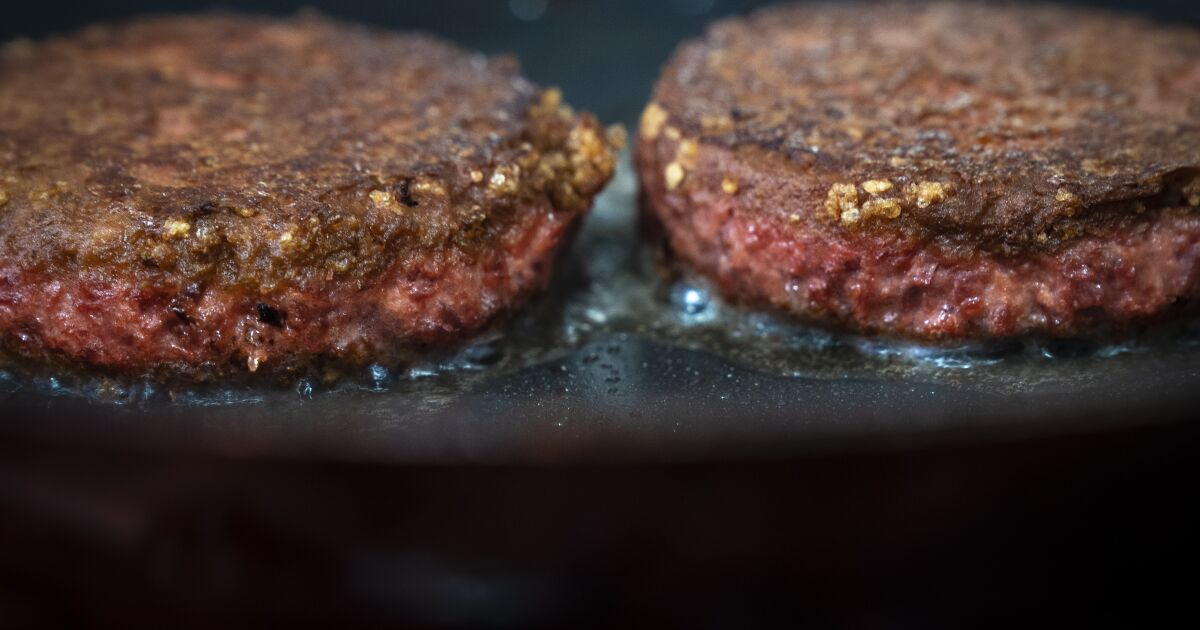 Photos and internal documents from a Beyond Meat Inc. plant in Pennsylvania show apparent mold, listeria and other food-safety issues, compounding problems at a factory the company had expected to play a major role in its future.

Products from the plant tested positive for listeria, a harmful bacteria, on at least 11 occasions during the second half of last year and the first half of 2022, according to an internal document provided by a former employee concerned about conditions at the plant. The occurrence of the bacteria at the facility was confirmed by two former employees, who asked not to be named discussing private information about the company. While listeria is frequently present at food plants, it’s more unusual for it to be found in the products themselves.

Photos taken by a former employee from inside the plant in January and April show what appear to be spills, unsafe use of equipment, and mold on walls and ingredient containers, while spreadsheets, photos and internally prepared reports reveal that foreign materials such as string, metal, wood and plastic have been found in food from the plant at least as recently as December.

Inspections by the Pennsylvania Department of Agriculture in March and September “found no instances of nonconformance with regulations,” and the company’s food-safety protocols “go above and beyond industry and regulatory standards,” a spokesperson for Beyond Meat said. The company didn’t comment on its internal documents or specific details about the conditions in its plant, such as the apparent presence of mold and references to safety violations.

“Mold growth takes a while — that underscores a lack of cleanliness,” said Bill Marler, a food-safety attorney, after viewing some of the photos. “If neat and tidy is 1 and filthy is 10, I’d put this at an 8.”

Chief Executive Officer Ethan Brown once envisioned this plant, located next to the Pennsylvania Turnpike about 45 minutes from Philadelphia, as a key part of Beyond Meat’s goal of building a “global protein company” that competes with the meat industry. After buying the facility and some of its equipment in 2020, the company planned upgrades to help reduce the cost of producing its plant-based hamburger patties, sausages and other items. That could help it compete with conventional meat. Last year, the company filed plans with the local township to double the facility’s size.

But expansion plans are on hold as the company reduces spending and high inflation limits demand for plant-based meat, which remains pricier than animal meat. By volume, refrigerated meat alternatives sold at retail fell 11.9% for the 52 weeks ended Oct. 9, according to data from market research group IRI Worldwide. Add in the company’s declining stock price, a steady drop in cash reserves and upheaval in the executive ranks, and Brown and his team have little room to maneuver.

“External third-party audits, including our most recent third-party audit in May 2022, gave the plant the highest-possible rating in each of the last three years,” a spokesperson said. Beyond Meat said the company is in good standing with Pennsylvania’s Department of Agriculture. The company didn’t give details about the audits or provide the names of the auditors. The plant is one in its U.S. network that processes Beyond Meat’s raw material into finished products.

Reports of listeria found in the products are organized in a spreadsheet reviewed by Bloomberg that shows weekly test results from the plant. The document shows 11 incidents of listeria out of 56 tests in the period from early June 2021 through late June 2022, with the most recent positive case in May of this year. Listeria is destroyed by cooking food, according to the U.S. Department of Agriculture. Many of Beyond Meat’s retail products, such as its meatballs and hamburger patties, are sold raw and must be cooked by the consumer.

William Madden, co-founder of Whole Brain Consulting, which specializes in connecting companies with co-manufacturing partners, said listeria is common at food plants, but it’s usually present in drainage areas. Finding it in the food is a serious problem, he said. “It shouldn’t be occurring in your food, not in any detectable level,” he said. “If this was a co-packer, I’d be telling you it’s time to move, but they actually own this place.”

Martin Bucknavage, a food-safety expert at Pennsylvania State University’s Department of Food Science, said it “would be highly unusual” to have the level of listeria reported in the internal document. “Although we’re seeing snapshots, there’s enough there that we’re seeing a lot of cleanup that needs to get done,” Bucknavage said after viewing photos from inside the plant and the list tracking listeria tests.

Madden and Bucknavage said that, without context, it’s hard to draw conclusions from the photos of the dirty containers. It’s possible that the ingredients in the dirty containers were about to be discarded, Madden said, but having the containers inside the plant leaves an opportunity for mold to be tracked through the facility. Bucknavage said, “you would not want to have something that dirty” in the facility, adding it would be problematic to store items on the floor, where they appear in the photos.

The photo of the overturned trolley in the mixer indicates what could be serious problems, both said. It was a “really, really bad idea” that “was begging for contamination” from the wheels that are in contact with the facility’s floor, Madden said. It could also endanger employees, or introduce foreign materials into the food. Bucknavage said, “you would not take something with wheels on the ground” and pour it into the mixer. Bucknavage also noted that the ceiling looked dirty in the image. “It doesn’t look like there’s tight procedures,” he said.

A spokeswoman for Pennsylvania’s Department of Agriculture said that a Sept. 21 visit to the facility, which was referenced by the company in its response to questions from Bloomberg, wasn’t a complete plant inspection. Rather, it was regarding the plant’s unpaid registration — a required, annual $35 fee that had been outstanding for almost a year. The fee has now been paid.

The U.S. Food and Drug Administration hasn’t inspected the plant since Beyond Meat purchased it, an FDA spokesperson told Bloomberg. An internal spreadsheet that spans August 2020 through June 2021 shows dozens of instances of product being slated for destruction because of cross contamination, expiration dates being passed and quality issues such as plastic being found in them. Other products were tagged for destruction because they were the wrong color or weight.

Internal reports also show that some contaminated products made it through to consumers. A document from October 2021 shows an investigation into wood found by consumers in burgers at two separate A&W restaurants. A similar report from April 2021 shows a metal link found in a bag of Dunkin’ sausage patties by the “end user.” Earlier this year, Beyond Burgers sold at Costco locations in Canada were recalled for the presence of wood.

“Dunkin’ ended its relationship with Beyond Meat in 2021 and has no record of the incident mentioned,” a spokesperson told Bloomberg. A&W didn’t provide a comment. Beyond Meat didn’t comment on details about foreign materials being found in food from the plant.

As of this summer, the company was expected to spend millions of dollars to expand the plant, according to the minutes of a public meeting in the township of Charlestown, where it is. That’s now on hold as the company works to shore up its liquidity.

The estimated total could prove difficult for a company that recently laid off more than 200 workers, reduced its sales outlook and has limited spending. Beyond Meat had $390 million in cash on hand as of Oct. 1, a total that has dwindled in six consecutive quarters from a peak of more than $1.1 billion in early 2021. The company is reducing expenses as it seeks “cash-flow positive operations” — a response to concerns about spending levels, declining revenue and a string of operating losses.

“The underlying unit economics of the business are no good,” said David Trainer, CEO of investment research firm New Constructs, which has put Beyond Meat on its list of “zombie” stocks — companies that don’t generate enough profit to cover their debt. “They can’t make money selling their product, they sell it at a loss. And at the end of the day, if you can’t fix that, you’ve got no hope.”

In a call with analysts on Nov. 9, Beyond Meat Chief Financial Officer Lubi Kutua said the company is “adopting lean business practices.” Brown added that management is also “taking immediate steps to rationalize our production network to address what we expect may be continued lower-than-previously-planned growth.” He said he remains confident in Beyond Meat’s “long-term vision, building meat from plants that are indistinguishable from its animal protein equivalent.”

At a recent meeting in Charlestown, Beyond Meat continued pursuing plant approvals and said it plans to purchase a nearby tract of land. The company is continuing efforts “to finalize approval of the plan in order to preserve its future right to develop the property as and when appropriate,” a spokesperson told Bloomberg. The company added that “preserving Beyond Meat’s rights in this way is not a departure from the company’s commitment to reducing operating expenses in the current economic environment.”

Beyond Meat manufactures its raw material at facilities in Columbia, Mo., and ships it to the Pennsylvania plant and to co-manufacturers across the country for further processing. As Brown explained in a February 2021 earnings call, the company had planned to add that raw-material production capacity to the Pennsylvania location to reduce costs.

Expansion and upgrades could improve efficiency at the plant and for Beyond Meat’s U.S. manufacturing as a whole. Unlike at newer food-manufacturing facilities, the production lines aren’t actually linear, and many of the machines are manually operated, making them slower than newer, automated equipment.

Johnson and Chang, both of whom help companies build new manufacturing facilities, said expanding the plant would be a positive for Beyond Meat. Chang said sanitation challenges would be another reason to expand and improve operations. “Food-safety issues are usually a call to action that the project needs to happen ‘NOW,’” he said in an email.

Madden, whose work focuses on co-manufacturing, said Beyond Meat “never should have bought the facility.”

“They should have concentrated on getting consumers to buy the product and let someone else deal with making the product,” he said.