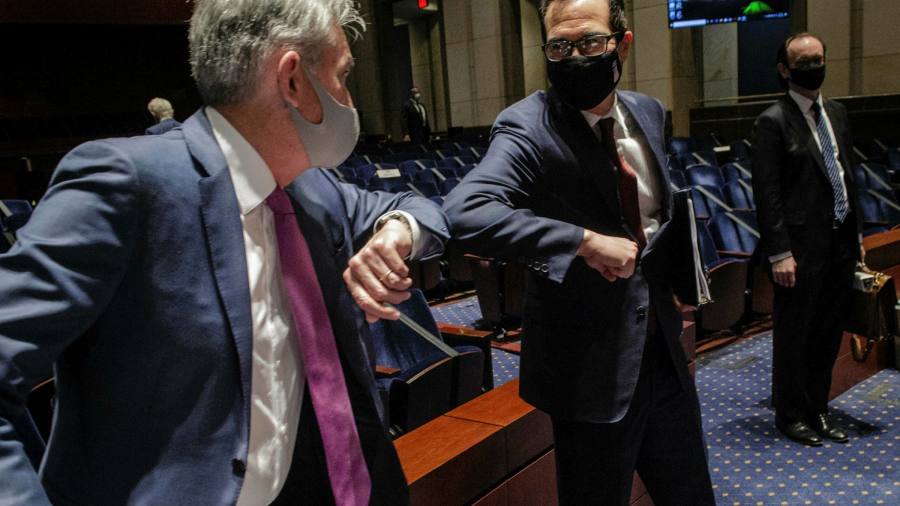 Jay Powell and Steven Mnuchin had plenty of reasons to argue over the past three years, from Donald Trump’s personal attacks on the chairman of the Federal Reserve, to trade tensions and the president’s handling of the pandemic.

But it was not until the past week that a rift between America’s top two economic policymakers boiled over, after the Treasury secretary pulled the plug on a portion of the central bank’s crisis lending facilities with about two months left in office, against Mr Powell’s wishes.

The move by Mr Mnuchin jeopardised a very effective partnership with Mr Powell that was crucial to securing a hefty US policy response to the coronavirus crisis early on. The central bank made no secret of the fact that it wanted to preserve the credit facilities being axed by the Treasury secretary as a key weapon in its arsenal to keep markets healthy during the pandemic.

“There have always been tensions between the Treasury and the Fed but there has always been a strenuous attempt to keep them private,” said David Wessel, director of the Hutchins Center for Fiscal and Monetary Policy, a Washington think-tank. “This seems extremely dangerous . . . like telling the firehouse we’re cutting off the water between now and inauguration, and hope we don’t have any fire,” he said.

If the economic recovery proceeds without backsliding due to a new surge in infections and lack of fiscal support, the worries about the impact of Mr Mnuchin’s decision may end up being moot.

But if financial markets were to experience new turmoil in the coming months, the Fed might struggle to limit the damage to investors in corporate debt, municipal and state debt, and asset-backed securities, whose markets were propped up by the lapsing facilities. And the fallout could be broader, given the nearly $40tn US equity market has been buoyed by the Fed’s intervention as well.

“This is a policy error, there’s no question around that,” said Ed Al-Hussainy, an analyst with Columbia Threadneedle. “These are facilities that provided an emergency backstop [and] as far as we know the emergency is not over. It is prematurely thinning out the Fed’s toolkit.”

The greatest solace for markets may be that the Treasury did agree to a three-month renewal of Fed credit facilities set up to support short-term funding markets, like commercial paper and money market mutual funds, which experienced great trouble back in March.

But the loss of the schemes terminated by Mr Mnuchin could be significant, even if their usage had been low until now. Of particular concern will be the end of two facilities created to buy corporate debt, including some junk bonds, and one to give access to credit to state and local governments at a time when they are increasingly cash-strapped with no federal aid money coming their way.

Markets were relatively listless on Friday after the spat between Messrs Powell and Mnuchin spilled into the open, with portions of the Treasury yield curve flattening. Investors said there was some expectation the Fed could be prompted into greater bond buying — particularly in longer-dated 10- or 30-year bonds — to help compensate for the decision by the Treasury.

Stocks slipped and spreads on junk bonds, which measure the premium investors demand to own the risky debt over haven Treasuries, widened marginally to end the week.

Bryan Whalen, a portfolio manager with TCW, said that regardless of the limited use of the programmes, their existence had been enough to instil confidence in markets in March, and that alone made them a “home run”.

“The bonds that were bought or loans that were made in and of itself, weren’t meaningful,” he said. “But collectively when you look at the list of programmes, and not just the funds that were allocated from the Treasury and Fed but the amount of sectors they were touching collectively it meant so much.”

Among the schemes, the Main Street Lending Program was perhaps the most derided, given its small outlays. Many companies and lawmakers had urged the Fed and Treasury to ease the terms of the facilities to boost demand and use up its $600bn capacity, but take-up remained paltry as some struggling businesses — including commercial real estate groups and retailers — thought it was not generous enough. Century 21, the famed New York City department store, filed for bankruptcy after failing to meet the facilities’ standards.

But while the MSLP may not be missed — the corporate and municipal debt facilities were more market-sensitive and it could be more risky to let them lapse.

The question plaguing investors is how quickly the programmes could be restarted if markets dive again. The Treasury department, whether under Mr Mnuchin until January 20 or his successor in the administration of Joe Biden after that, could tap the Exchange Stabilization Fund without congressional approval to revive the facilities, but they would have smaller capacity than they did this year. Getting Congress to sign off on greater funding could be difficult with many Senate Republicans opposed to their renewal.

“Politically the hurdle rate for invoking [these facilities] next time is much higher,” Mr Al-Hussainy said. “There will be people in Congress who correctly say these programmes disproportionately benefited large corporations.”

Mr Powell could have escalated the dispute with Mr Mnuchin further this week by refusing to send the unused funds from the facilities back to the Treasury department, in effect stopping them from expiring. But instead, in a letter on Friday afternoon that could spare him a fierce political battle with the outgoing Trump administration, he said he would abide by Mr Mnuchin’s decision — and applauded their work together on the facilities in the first place.

“Our efforts helped to prevent severe disruptions in the financial system and unlocked trillions of dollars of private lending to households, businesses, and municipalities at a moment when the economy needed it most,” the Fed chair said.

View: Time has come for an all-India Muslim party

Man Calmly Plays Golf As Alligator Approaches From Behind