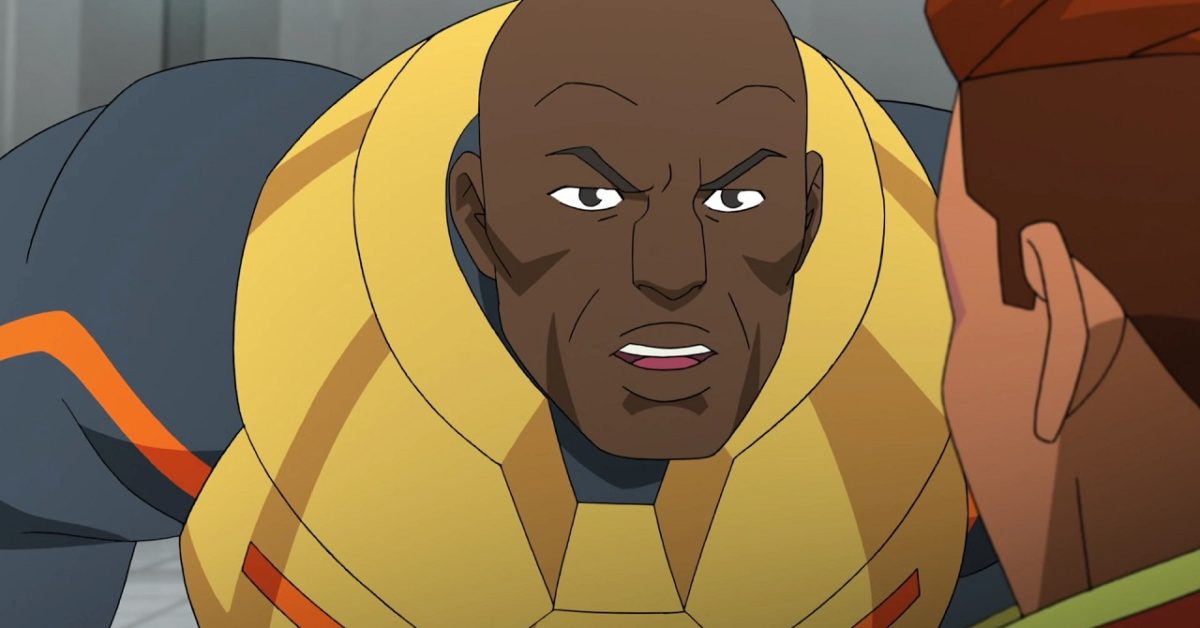 To say that fans of Robert Kirkman‘s Invincible had pretty high expectations when it came to Amazon’s Steven Yeun (Mark Grayson / Invincible) & JK Simmons (Nolan Grayson / Omni-Man)-voiced animated adaptation would be putting it mildly. Thankfully, those expectations were not only met but blown apart in ways viewers are still learning to appreciate. So much so that Invincible was renewed for a second and third season in April 2021. And then, a year later, Yeun shared a teaser letting folks know that recording was getting underway. But five months later, where do things stand? Thanks to The Walking Dead star Khary Payton (Markus Grimshaw / Black Samson), we have an update to pass along courtesy of his interview with Daniel Merrifield (aka The Movie Dweeb).

Running between 48:15 – 54:16, Payton and Merrifield get into great conversations about working with Kirkman, how the voice cast became a mini “The Walking Dead” reunion & more. But with regards to the second season of the animated series, Payton shared that the recording work was done for the second season and that they had already moved on to the third season. But when it came to the animation side, Payton explained that more time was needed because of the glut of big studio animation projects that needed to be worked on because of the pandemic. But even though he says it’s still “gonna take awhile,” Payton made sure folks knew that the artists are taking their time to guarantee the quality of the first season is maintained.

In honor of “Invincible Friday” from back in April of this year, we have a look at Yeun from the recording studio showing him recording this teaser- with the teaser meant to be a wink-wink-nudge-nudge that recording sessions are underway. Here’s a look at the clip, but don’t watch it too many times or you’ll have “Now!” rambling around your brain for the rest of the day (trust us on this one):

Speaking with Collider in support of his film The Humans earlier this year, Yeun shared why he’s “really excited” and why he believes viewers’ strong, positive reaction to Invincible is a harbinger of great things to come for adult animation:

Yeun is “Really Excited” for “Bonkers” Second Season: “I’ve talked to Robert [Kirkman], here and there. He’s super excited about it. He thinks Season 2 is gonna be even better than Season 1, which I have no doubt about. If you go to his source material, ‘Invincible’ is an incredible comic, and just thinking about how much story hasn’t been told from that run, it’s gonna be bonkers. I’m really excited about it.”

Yeun Sees Strong Reactions to “Invincible” as Sign of Bigger Things to Come for Adult Animation: “I’ll be honest, I did not expect this level of response. People really enjoyed the show. That’s not to say that I thought the show wouldn’t be enjoyed. I just didn’t know how many people were coming to it like that. To me, I think it speaks to America’s appetite now for adult animation, which is really cool. I grew up on it. I think all of us, of our generation and below, grew up on it. Largely, our programming was dictated by the generations before us, that didn’t necessarily love animation that way. We’re in a weird, cool time where I’m seeing so many kids watch anime and so many people watch adult animation. People are learning about Don Hertzfeldt. It’s thriving. I think we’re probably on the precipice of right before things really pop off. I think we’re gonna get some hopefully [Hayao] Miyazaki levels of animation. We do with Pixar, but I just mean coming from different places. It’s a new world. It’s certainly all brand new.”