Is ‘the Blob’ coming back to Cape Cod Bay? Low oxygen levels detected, lobsters may die if conditions worsen 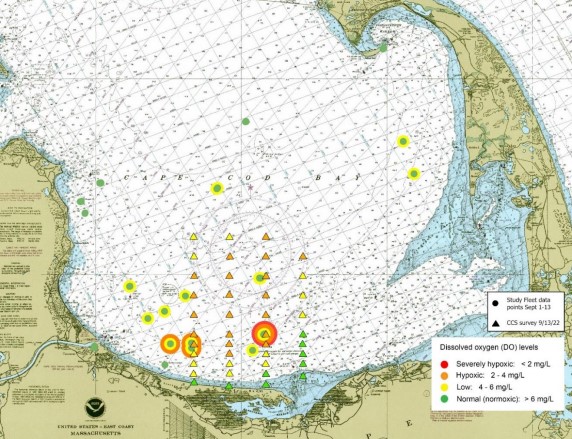 Could “The Blob” be returning to the ocean bottom in southern Cape Cod Bay?

There are signs that the low oxygen conditions that killed hundreds of pounds of trapped lobsters a few years ago might soon come back to the region.

The Massachusetts Division of Marine Fisheries — working with commercial lobster fishers and the Center for Coastal Studies — is reporting that dissolved oxygen levels are decreasing in some southern spots of Cape Cod Bay.

Officials are reporting that they haven’t detected any prolonged periods of severely hypoxic conditions — that is, insufficient oxygen — this summer, but the declining trends of dissolved oxygen are “concerning.”

“Many mobile bottom dwelling animals like lobsters will move to avoid hypoxic conditions when they can, but will die if stuck in traps and exposed to hypoxia for more than a few hours,” the Massachusetts Division of Marine Fisheries said in a statement.

Fishermen are being urged to report any unusual observations, and to remove traps from the area if the conditions worsen.

“DMF urges those lobster fishermen working in or near the area to be on the lookout for signs of hypoxia, which includes unusual amounts of lethargic or dead lobsters, crabs, or finfish in the traps,” the agency added. “DMF recommends fishermen check traps frequently, and possibly consider moving gear out of the affected region to prevent trapping lobsters or crabs in hypoxic conditions.”

In September 2019, fisheries watchers recorded severe hypoxic conditions for the first time in southern Cape Cod Bay. This surprise event killed hundreds of pounds of lobsters caught in the traps of unsuspecting fishers in the area.

“The Blob” is what officials have been calling the insufficient oxygen water mass that is formed near the ocean bottom in southern Cape Cod Bay.

Researchers are trying to understand how changing environmental conditions may be leading to these low oxygen conditions. Water temps in the bay have been quickly rising, but ocean bottom temps are not warming quite as fast as surface temps. This cuts off the dissolved oxygen from the cold bottom waters.