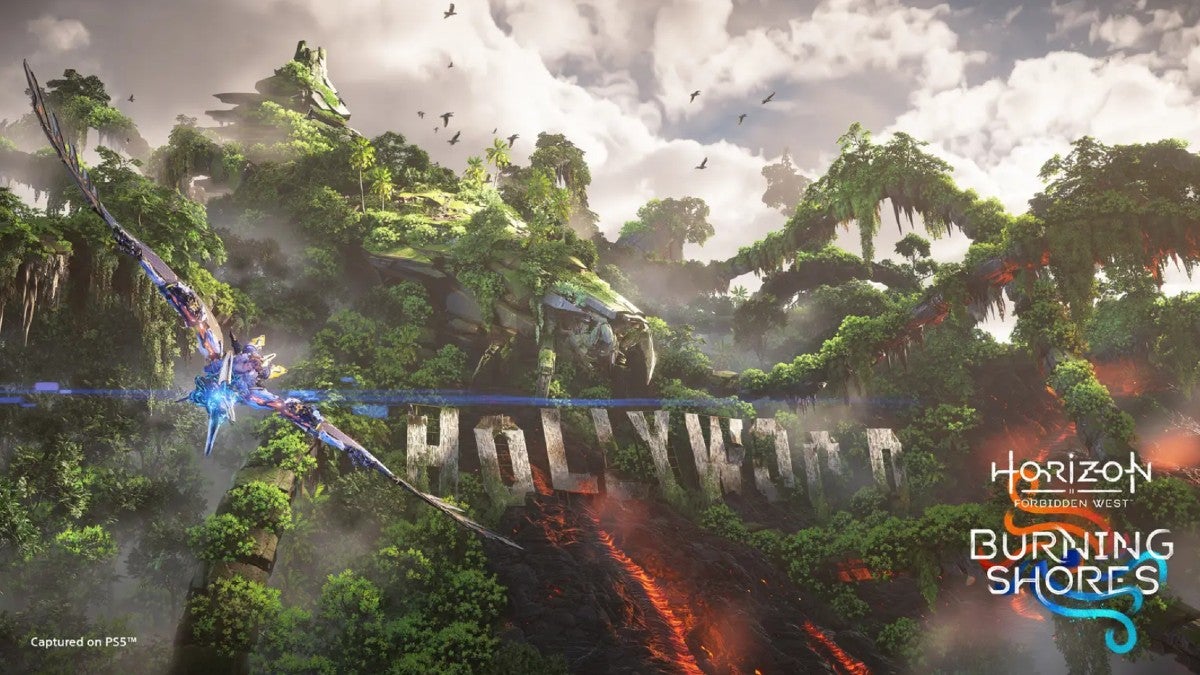 At long, long last “Horizon Forbidden West” is getting the massive DLC expansion fans have been begging for and with it, Aloy (Ashly Burch) is headed to Hollywood, baby.

Announced Thursday at the 2022 Game Awards, “Horizon Forbidden West: Burning Shores” will launch on PlayStation 5 April 19, 2023. And while that’s not as far away as the 31st century (when the Horizon series takes place), it sure feels like it, considering “Forbidden West” has been out for nearly a year. Which is to say, we’re excited.

“Horizon Forbidden West: Burning Shores” will take Aloy from the Tenakth clan lands (stretching from Western Utah to the San Francisco Bay area) to the ruins of Southern California, where among other things she’ll encounter the dilapidated Capitol Records building and the Hollywood Sign. Of course Los Angeles of the 31st century is a vastly different place, “an overgrown and fractured city,” per the game’s developer Guerilla. And large portions of it are a volcanic archipelago of rock and ruins partially submerged under the pacific ocean.

But Aloy isn’t there to sightsee — it’s obvious something serious is going on, because the trailer ends with what sure likes like a fully operational Faro Automated Systems Horus Titan — as in, the self-replicating, biofuel compatible machines that destroyed all life on earth in 2064. Yikes.

If “Horizon Zero Dawn: Frozen Wilds,” the incredible, and incredibly large DLC expansion of “Horizon Zero Dawn” is any indication, whatever brings Aloy to LA is significant, dangerous, and has serious implications for the next game in the series. Our guess is that it’s got something to do with the hunt for Hephaestus and [SPOILER] a way to stop Nemesis — and maybe, possibly contains yet another reason to hate Ted Faro with the heat of a thousand suns.

Whatever happens though, we had better spend some more time with Sylens (Lance Reddick). Luckily, it sure looks like we will.

Alas, developers Guerilla have some sad news for PlayStation 4 owners: “Horizon Forbidden West: Burning Shores” won’t be available on that system. “To achieve this grand vision technically and creatively,” the developer said in a statement Thursday, “we’ve made the difficult decision to focus all our efforts on making an incredible experience exclusively for the PlayStation 5 console.”

Well, that sucks for people who haven’t yet upgraded to PS5, but don’t worry, we’ll host watch parties.

In addition to the trailer above, have a look at some positively stunning images below.

No Joke, Underwear-as-Pants Is Taking Over Hollywood RN

Thinking of eating bugs to save the planet? Tribal communities in India have been doing it for centuries

5 Dinners You Can Make With Frozen Vegetables