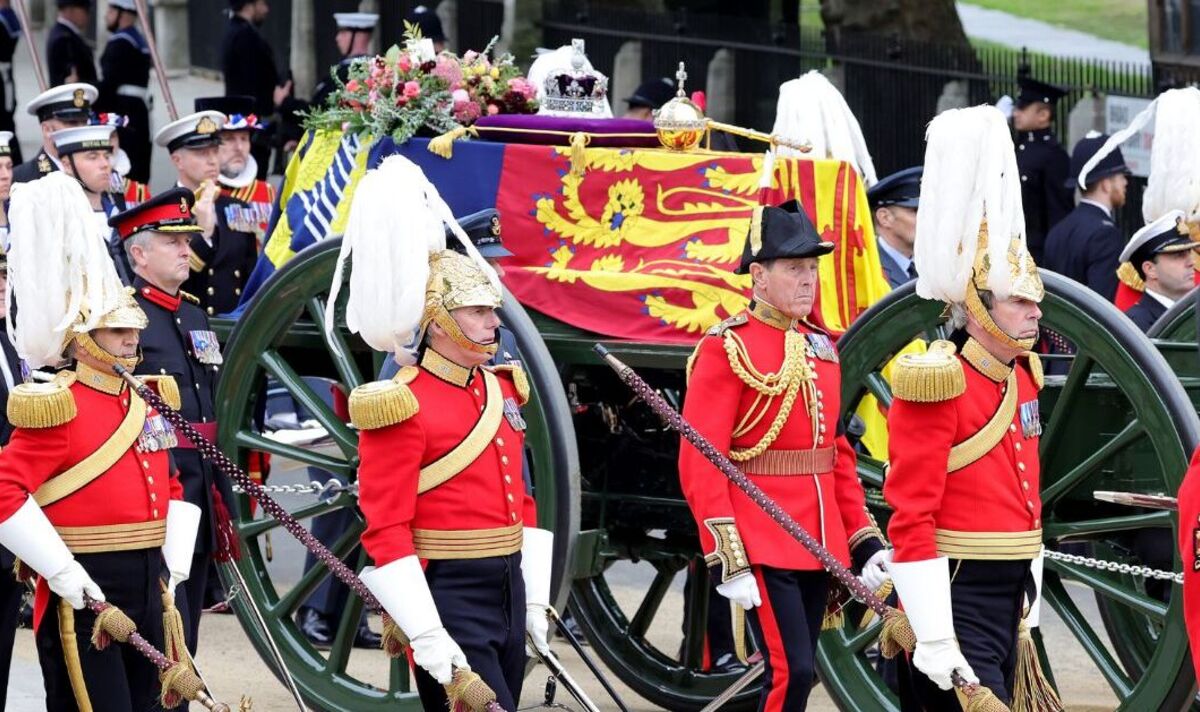 Tuesday morning marked the end of the national mourning period after the death of Queen Elizabeth II. The flags around the country went from half mast to full and many people began to get back to normal. However, many ITV and Good Morning Britain viewers were left fuming on Tuesday morning as the coverage of the funeral continued, with presenters Susanna Reid and Ben Shephard reflecting on their feelings throughout the day.

Following a state funeral in London and a military procession to Windsor Castle, the Queen was buried in a private ceremony with the Royal Family.

Susanna and Ben opened the ITV news show on Tuesday and touched on the day’s events, whilst explaining how they felt in the moment.

Ben praised the pallbearers and expressed: “It was just the most remarkable exemplary performance from them and they had clearly rehearsed and practised over and over again.

As Susanna reflected: “It was like being an eyewitness to history wasn’t it, a really privileged position.”

However, as the coverage of the funeral continued with discussions surrounding the Queen’s corgis and the events which will now follow, many viewers became rather irked.

Taking to their Twitter accounts, Gaynor Walker fumed: “@BBCBreakfast @GMB Can we have some real news, please?? We’ve had days of coverage of the Queen meanwhile so much is happening in the world. Can we move in now please???”

Matthew Westham commented: “@GMB Enough the Queen is dead the mass hysteria must end, get the country on its feet.”

Good Morning Britain viewer @Natnatgoodaz added: “@gmb This is becoming a dictatorship now being force-fed the Queen for god sake report some other news now.”

Ben Neave exclaimed: “@GMB Right. It’s sad about the Queen, but come on. Let’s all move on and start talking about things that matter to the country. Enough eulogies now!”

@cookingincornw1 tweeted: “@GMB Long live the King. Now b****y move on. Your remit is NEWS. There can be nothing that hasn’t been covered already. We are in a crisis people cannot eat!!!”

However, not everyone was annoyed by the coverage as @pagetownsworth9 priased: “People complaining about the funeral coverage. It is literally a huge moment in hisotry. Let people who love the Royal Family talk about it all they want, no one is forcing you to listen.” (sic)

Despite the national mourning period for the public now over, the Royal Family are not expected to carry out official engagements, and flags at royal residences will remain at half-mast until 8am after the final day of royal mourning.

The Queen was finally laid to rest with her husband the Duke of Edinburgh during a private evening burial service attended just by close family.

Buckingham Palace said: “Following the death of Her Majesty the Queen, it is His Majesty the King’s wish that a period of royal mourning be observed from now until seven days after the Queen’s Funeral.

“Royal mourning will be observed by members of the royal family, Royal Household staff and representatives of the Royal Household on official duties, together with troops committed to ceremonial duties.”

After the day’s service and with Her Majesty finally being laid to rest next to her husband Duke of Edinburgh, Prince Philip, the official Royal Family Twitter account posted an unseen image.

The image saw Her Majesty at Balmoral in 1971, captioned: “May flights of Angels sing thee to thy rest’.

The scale of the funeral and mourning arrangements over the 10-day period, which included a miles-long queue snaking along the south bank of the River Thames to see the Queen’s lying-in-state, led to what police described as the biggest operation we’re likely to launch in the UK.

Good Morning Britain airs weekdays from 6am on ITV.

MoveOn Launches ‘Nail the Vote’ Campaign Ahead of Midterm…

Malay/Muslim community has made great progress but must now…

Charts suggest it’s ‘way too early’ for the market to…