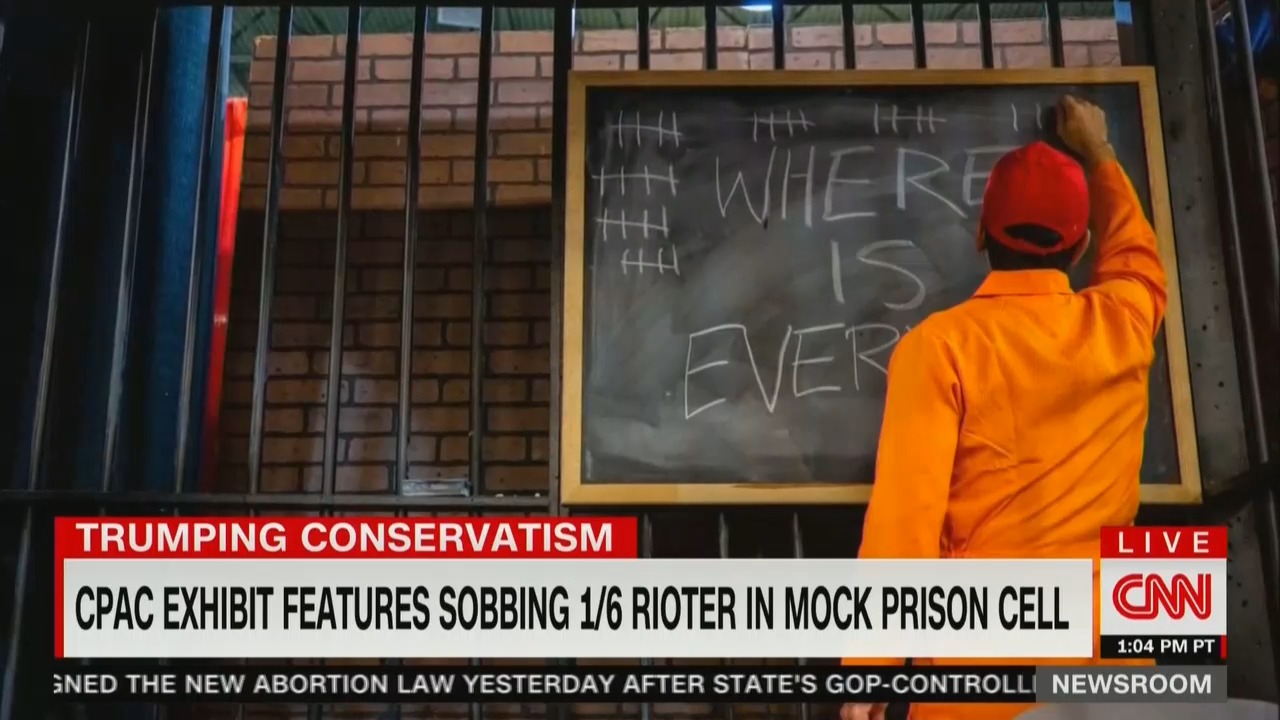 CNN’s Jim Acosta slammed the ‘bizarre’ CPAC exhibit of a January 6th Capitol rioter sobbing in a jail cell, bringing on podcast host Joe Walsh and CNN commentator Charlie Dent to discuss the state of the Republican Party as the event in Dallas, Texas wraps up Saturday evening.

On Friday, the Conservative Political Action Conference included a politically charged performance of a man in an orange jumpsuit, donning a MAGA hat, and sitting in a fake jail cell pretending to cry. Brandon Straka, the man in the installation, tallied days on a chalkboard and never once broke character.

Rep. Marjorie Taylor Greene (R-GA)–who spoke during the conference on Friday–showed up at the political performance art, entering the faux jail cell and embracing Straka. Greene fell to her knees, grasped his hands, and led the two of them and the rest of the crowd in a prayer.

On Saturday, Acosta noted that the installation was “quite something,” adding that Straka was “doing some fake snowflake tears.”

“I don’t know if it’s CPAC or summer Shakespeare,” quipped Acosta, “To coup or not to coup, that is the question.”

Walsh then chimed in saying that “we’re all just having a hard time wrapping our arms around the fact that this is who this party is.”

The podcast host continued saying that this performance art “means that everybody at CPAC, they don’t believe January 6th was a big deal or bad thing. That’s where the base is.”

Walsh torched the Republican Party claiming that it has become “anti-democracy,” “fascist,” and one that “embraces authoritarianism.”

Acosta then turned the conversation over to Dent, who had a different frame of mind, arguing that CPAC is not representative of the entirety of the Republican Party.

“I think we should try to separate what goes on at CPAC,” from the GOP, continuing that it has “frankly become a freak show over the years.”

Dent claimed that the conference is “really not representative clearly of the country and I would argue not of the Republican party, even today.”

During Dent’s statements, Walsh was shaking his head in disagreement.

The podcast host got a chance to rebuke saying “All you’ve got to do is tune in to Tucker Carlson every single night you want to know where the typical Republican voter is.”

CPAC will feature former President Donald Trump on Saturday evening, the most anticipated event of the weekend.

Watch above via CNN

Denial of responsibility! Pedfire is an automatic aggregator of the all world’s media. In each content, the hyperlink to the primary source is specified. All trademarks belong to their rightful owners, all materials to their authors. If you are the owner of the content and do not want us to publish your materials, please contact us by email – [email protected]. The content will be deleted within 24 hours.
TV
0
Share

‘That Last Movie Was Terrible’