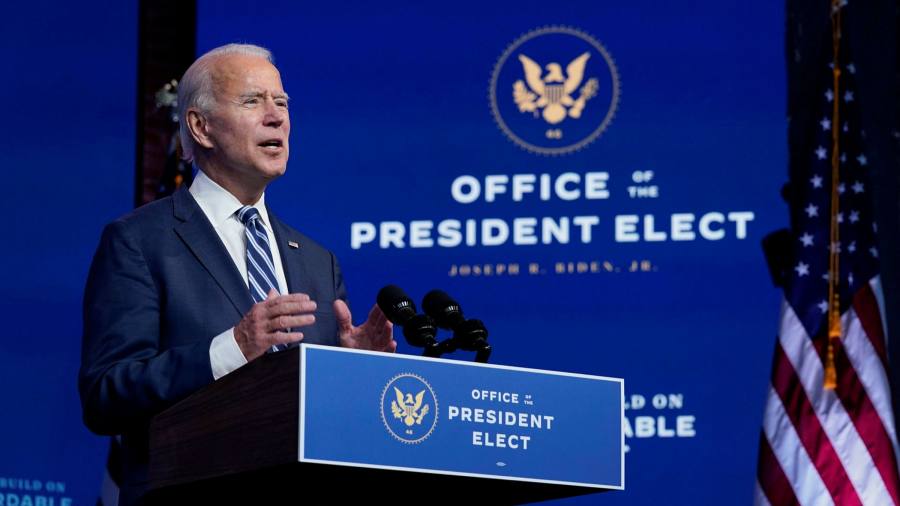 The writer is president of Queens’ College, Cambridge university, and adviser to Allianz and Gramercy

As US president-elect Joe Biden contemplates his first 100 days in office, he should consider what can be done over time to reduce the extreme codependency that developed between his predecessor and the US stock market.

Mr Biden is unlikely to put this very high up on the list of challenges he faces. However, the longer he delays in deciding and communicating his approach, the greater the likelihood that he will confront the same dilemma the current leaders of the US Federal Reserve and European Central Bank faced early in their tenures. He might wish to do one thing and be forced into the opposite course of action.

Donald Trump believed, and repeatedly stated publicly that the stock market validated his policies as president. The more the market rose, the greater the affirmation of his “Make America Great Again” agenda.

The president’s approach was music to investors’ ears. They saw it as supporting, both directly and indirectly, the notion that policymakers needed asset prices to head ever higher. It reinforced the longstanding belief of a “Fed put” — shorthand for the view that the Fed will always step in to rescue the markets — to such an extent that investor conditioning changed markedly.

With so much political backing and Fed support for rising markets, pullbacks became a buying opportunity regardless of their cause. The more often this scenario played out, the deeper the Fomo — the fear of missing out on yet another remunerative opportunity — and the more market participants it affected. The result was a notable and widening disconnect between markets and the real economy.

This has led to collateral damage risks and unintended consequences. The pattern encourages excessive and increasingly irresponsible risk taking, fuelling the risk of future financial instability. It encourages the misallocation of resources throughout the economy. By aggravating inequality, it amplifies the “Wall Street versus Main Street” divide that slowly but surely eats away the integrity and credibility of economic and financial institutions.

Concerned about this disconnect, Jay Powell as Federal Reserve chairman and Christine Lagarde as European Central Bank president each tried to draw a line early in their tenures by putting limits on how much they would support the markets. In both cases, they were forced quickly into highly-visible U-turns.

The “Powell Put” has become the latest iteration of one of the market’s favourite beliefs. It started with Alan Greenspan and was also inadvertently deepened by Ben Bernanke and Janet Yellen. Over in Europe, Ms Lagarde has now shouldered her predecessor Mario Draghi’s burden of having promised to do “whatever it takes”.

Video: Why it is a good time to be bullish on stocks

The path of least resistance for Mr Biden is keep following the path set by central bankers that was taken to an extreme by Mr Trump. He would avoid having to deal with financial volatility in addition to a health crisis, social divisions, a slowing economy, and the worrisome surge in inequalities of income, wealth and opportunity.

However, this easy path would also be the wrong one. Right at the outset of his presidency, Mr Biden needs to establish that he will not be held hostage by stock markets that have already drifted too far away from their original purpose of efficiently mobilising and allocating investible funds to spur growth.

On regulatory matters, he should signal his administration’s determination to better understand and supervise the migration of risk from the banking system to other financial institutions that as yet are not comprehensively regulated.

In his approach to Fed appointments — and he has some to make before deciding next year whether to give Mr Powell a second term — he should favour people willing to restore the central bank’s traditional role as a leader of financial markets and not a follower.

US presidential election 2020: You tell us

None of this is easy, nor is it risk free. But, over his entire tenure this approach would be less problematic than continuing to enable and empower markets that are too reliant on policy support.

As vice-president, Mr Biden dealt with the fallout of the 2008 global financial crisis. He knows all too well how hard it is to protect living standards and the economy when financially unsustainable practices reach the breaking point as a result of financial accidents due to irresponsible risk-taking.

Mr Biden needs to pivot rapidly away from Mr Trump’s approach. This change would also be in the longer-term interest of investors and well-functioning markets.

EPS forecast: Earning per share could see a growth of up to 30% in 2021: Morgan Stanley