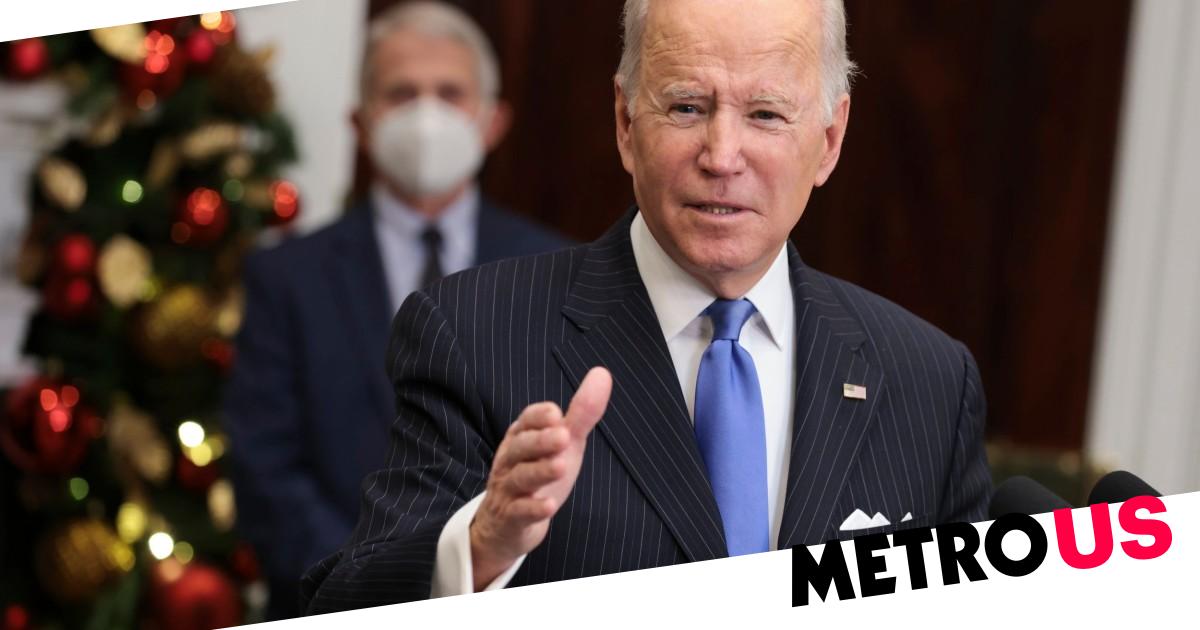 President Joe Biden postponed speaking on the US’s strained supply chain on Monday after meeting with business leaders to discuss holiday shopping season stock and the threat of the Omicron coronavirus variant.

About 20 minutes before Biden was set to deliver his remarks, the White House issued a statement saying that he will instead speak on Wednesday on ‘the economy, supply chains and lowering costs for the American people’.

According to the statement, the change was made to ensure the business leaders who traveled to the White House today would have ample time to speak with the President.

Biden is looking to combat an inflation rate that just hit a 31-year high, clogged ports keeping goods off shelves ahead of the holidays and the Omicron variant – which he will provide a detailed plan for tackling before it enters the US on Thursday.

He met Monday with business leaders from a variety of brick and motor and online stores to hear how they are keeping workers safe from Covid-19 and overcoming the supply chain issues.

Joining him in person were chief executives from an array of sectors, according to CNBC. From the tech sector were Etsy CEO Josh Silverman and Samsung CEO KS Choi. The grocery sector was represented by Food Lion president Meg Ham, Todos Supermarket CEO Carlos Castro and Kroger CEO Rodney McMullen.

‘I was really pleased, quite frankly, and proud of the cooperation you saw beteween business and labor at the ports in southern California,’ Biden said, adding that it ‘didn’t take much’ to convince those in charge to extend port operating hours to 24/7.

Before ending the public broadcast, Biden thanked Walmart’s CEO Doug McMillion for his company’s cooperation in trying to unclog the bottlenecks off the west coast.

‘I was really pleased quite frankly and proud of the cooperation you saw between business and labor at the ports in southern California,’ it didn’t take much to convince them to move to 24/7 7 days a week.’

According to McMillion, the port and transit delays are improving because of the efforts the Biden Administration has implemented. They’ve seen an increase of containers going through ports of about 26% nationally, in southern california ports in particular there’s been a 51% improvement in that flow through.

‘That’s helped a lot as it relates to categories like toys, which are so important for Christmas,’ McMillion said. ‘Generally speaking we are in good shape.’

Black Friday sales were up nearly a third from last year, Biden said. In store purchases were up even more than that, but he did not have a figure.

He said he heard similar reports of success from small business Saturday.

The meeting took place after Biden gave a briefing on developments related to the Omicron variant of the coronavirus.

The World Health Organization said on Monday that the variant is likely to spread internationally, posing a ‘very high’ global risk.

Get in touch with our news team by emailing us at webnews@metro.co.uk.

‘I’ll wear one for the foreseeable’: masks abound despite England rule change |…

Solar industry in Colorado, across US expected to shine in…