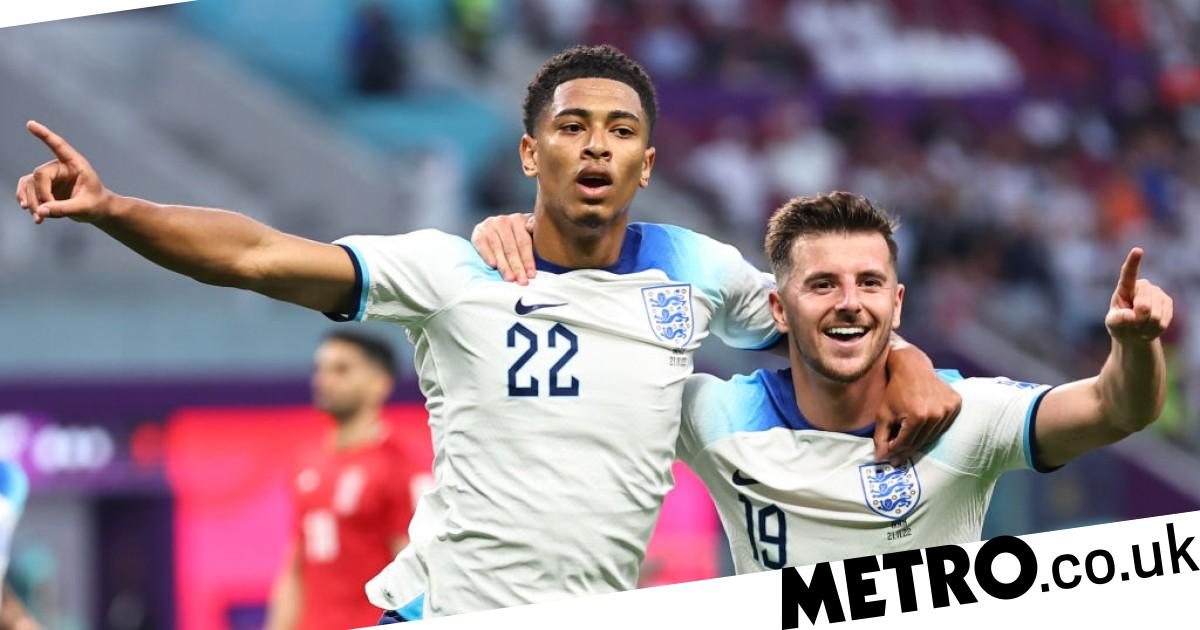 England got their World Cup campaign off to a perfect start with a fantastic 6-2 win against Iran in Doha.

The build-up to the fixture was dominated by the FA’s decision to stop Harry Kane from wearing a OneLove armband, which he had committed to wearing in solidarity with the LGBTQ+ community.

With so little focus on the actual football, there were fears that England could take their eye off the ball.

But Southgate’s attack-minded team selection gave the Three Lions the early impetus and they were ahead midway through the first half when Jude Bellingham expertly headed Luke Shaw’s cross into the far corner.

England had already gone close through Harry Maguire, when the Manchester United captain clattered a header against the crossbar.

But the centre-back had a part to play in England’s second when he nodded down Kieran Trippier’s corner for Bukayo Saka to slam home a second.

England’s impressive play was running through Bellingham and you would never have known the 19-year-old was making his first World Cup appearance as he galloped through the Iran midfield and slipped in Harry Kane.

The Tottenham superstar looked short of options but he played a blind cross into the box to find the unmarked Raheem Sterling, who volleyed home to make it 3-0 before the break.

Iran made a number of changes at half-time and made things more difficult for Southgate’s side, who took their foot off the gas somewhat.

But there was still time for Saka to find his second of the match, earning himself the Man of the Match award in the process.

Southgate took the chance to make a number of substitutions but Iran took advantage of the changes when Mehdi Taremi scored arguably the goal of the game when he cannoned an effort in off the crossbar and past Jordan Pickford.

Marcus Rashford, who was overlooked in favour of Sterling, entered the fray and scored with just his third touch when he chopped inside and slotted home with his left foot to make it 5-1.

There was time left on the clock in injury time for Jack Grealish to get in on the act when Callum Wilson, his fellow substitute, unselfishly squared the ball back when he was through on goal for the Manchester City playmaker to slot home.

Iran were awarded a controversial penalty in the tenth minute of injury time when John Stones was adjudged to have brought down Taremi from a corner and the Porto star stepped up to score a late consolation.

After such a strong start, England can practically guarantee their progress to the knockout stages with a win against USA on Friday evening.