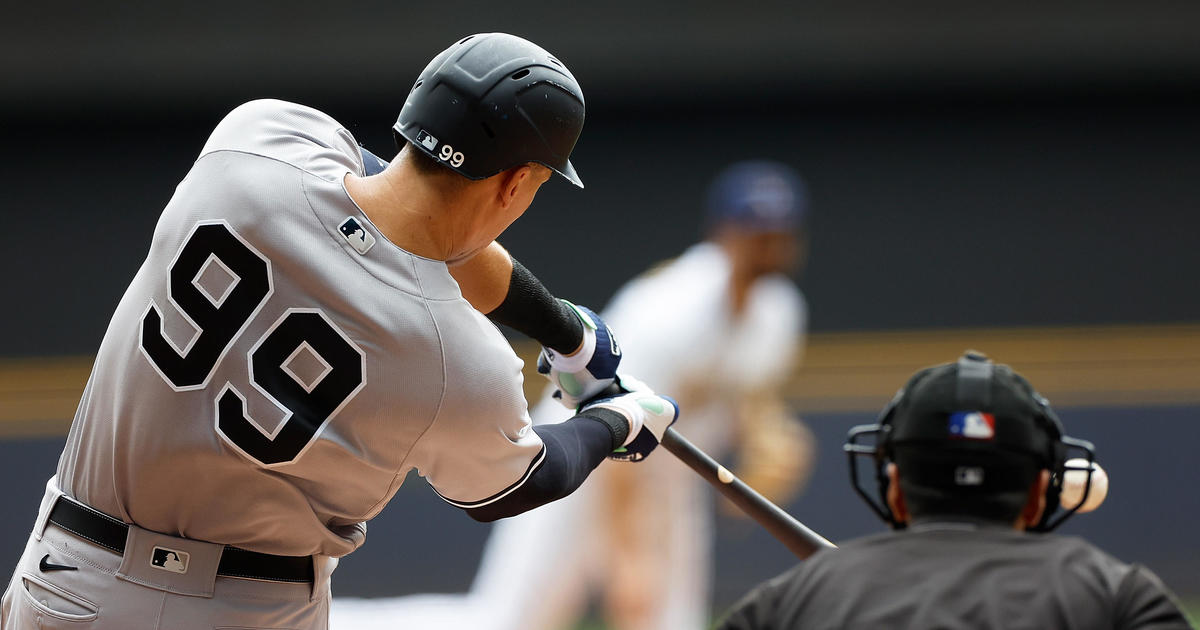 MILWAUKEE — Aaron Judge hit his 58th and 59th home runs of the season to move within two of Roger Maris’ American League record with 16 games remaining and lead the New York Yankees over the Milwaukee Brewers 12-8 on Sunday.

Judge added a two-run double in the ninth as part of a four-hit day for New York (88-58), which hit five homers and avoided a three-game sweep. The Yankees opened a 5 1/2-game lead over second-place Toronto in the AL East and headed to the Bronx for a homestand against Pittsburgh and Boston that starts Tuesday.

“They’re going to be like over the edge, slapping at things, and beer is going to be flying everywhere,” pitcher Gerrit Cole predicted. “It’s probably not going to be a child-friendly environment in the bleachers. It’s going to be nuts.”

Seeking a Triple Crown, Judge leads the major leagues in homers and with 127 RBIs. His .3162 batting average is just behind AL leader Luis Arraez of Minnesota at .317 and Boston’s Xander Bogaerts at .3164.

“We have some big games coming up,” Judge said. “That’s really the only thing on my mind right now. My focus is to go out there and win a game.”

Judge’s homers totaled 857 feet. His first came on a sinker from Jason Alexander with a 2-0 count in the third inning, a 414-foot, opposite-field drive into the right field second deck.

Judge became the first player with five batted balls of 110 mph or more in a game since Statcast started tracking in 2015, the hardest at 115.4 mph.

“You have to come with your best stuff against him,” Alexander said. “I felt like I made some good pitches, and it’s tough when you can paint one on the outside and he still puts it 110 (mph) into the stands. It’s a really thin margin of error.”

Then in the seventh against Luis Perdomo, Judge pulled a slider with a 1-2 count for a 443-foot shot to left.

“This is his moment right now. When you make a mistake against him, he’s going to take advantage of it,” Perdomo said.

Judge also walked against Hoby Milner (3-3) leading off a four-run fifth as the Yankees went ahead to stay at 7-4.

Judge had not homered in his previous three games since going deep twice at Boston’s Fenway Park.

Philadelphia’s Kyle Schwarber is a distant second in the major leagues with 39 homers. Judge became the first player since Mookie Betts in 2018 to top 10 WAR by FanGraphs. Since 2012, only Betts, Mike Trout (twice) and Buster Posey had reached that mark.

Anthony Rizzo homered in his return from the injured list, his 31st of the season, and had three hits. Aaron Hicks and rookie Oswaldo Cabrera also went deep as the Yankees overcame 3-0 and 4-1 deficits.

New York had 16 hits and twice hit back-to-home homers: Judge and Rizzo in the third, then Hicks and Judge in the seventh.

Cole (12-7) gave up Kolten Wong’s three-run homer in the first and Tyrone Taylor’s solo shot in the second, Cole has allowed second-most in the majors and trailing only Washington’s Josiah Gray at 37.

“I don’t really have a good answer,” Cole said. “In some cases, it’s kind of remarkable. But I need to be better.”

Rowdy Tellez hit a two-run homer in the eighth off Clarke Schmidt. Milwaukee scored twice in the ninth and brought up the potential tying run with one out before Clay Holmes struck out Luis Urías and retired Keston Hiura on a groundout.

Yankees: Boone said the team was waiting for doctors to review an MRI taken on RHP Frankie Montas’ throwing shoulder. … RHP Scott Effross (strained right shoulder) gave up a leadoff homer to Bobby Dalbec and a pair of doubles as he pitched the fifth inning for Triple-A Scranton/Wilkes-Barre against Worcester. … RHP Albert Abreu (elbow inflammation) pitched a scoreless inning for Double-A Somerset, striking out two and allowing one hit. … Boone said INF/OF Marwin Gonzalez was feeling better after being removed from Saturday’s game when struck on the helmet by a throw from Brewers catcher Victor Caratini while standing in the batter’s box. …C Jose Trevino was out of the starting lineup for a second consecutive day after leaving Friday’s game with a bruised right knee.

Denial of responsibility! Pedfire is an automatic aggregator of the all world’s media. In each content, the hyperlink to the primary source is specified. All trademarks belong to their rightful owners, all materials to their authors. If you are the owner of the content and do not want us to publish your materials, please contact us by email – [email protected]. The content will be deleted within 24 hours.
mlb
0
Share

Huma a big fan of Madhuri : The Tribune India

Tax-free Shopping for Overseas Visitors is Back in the…