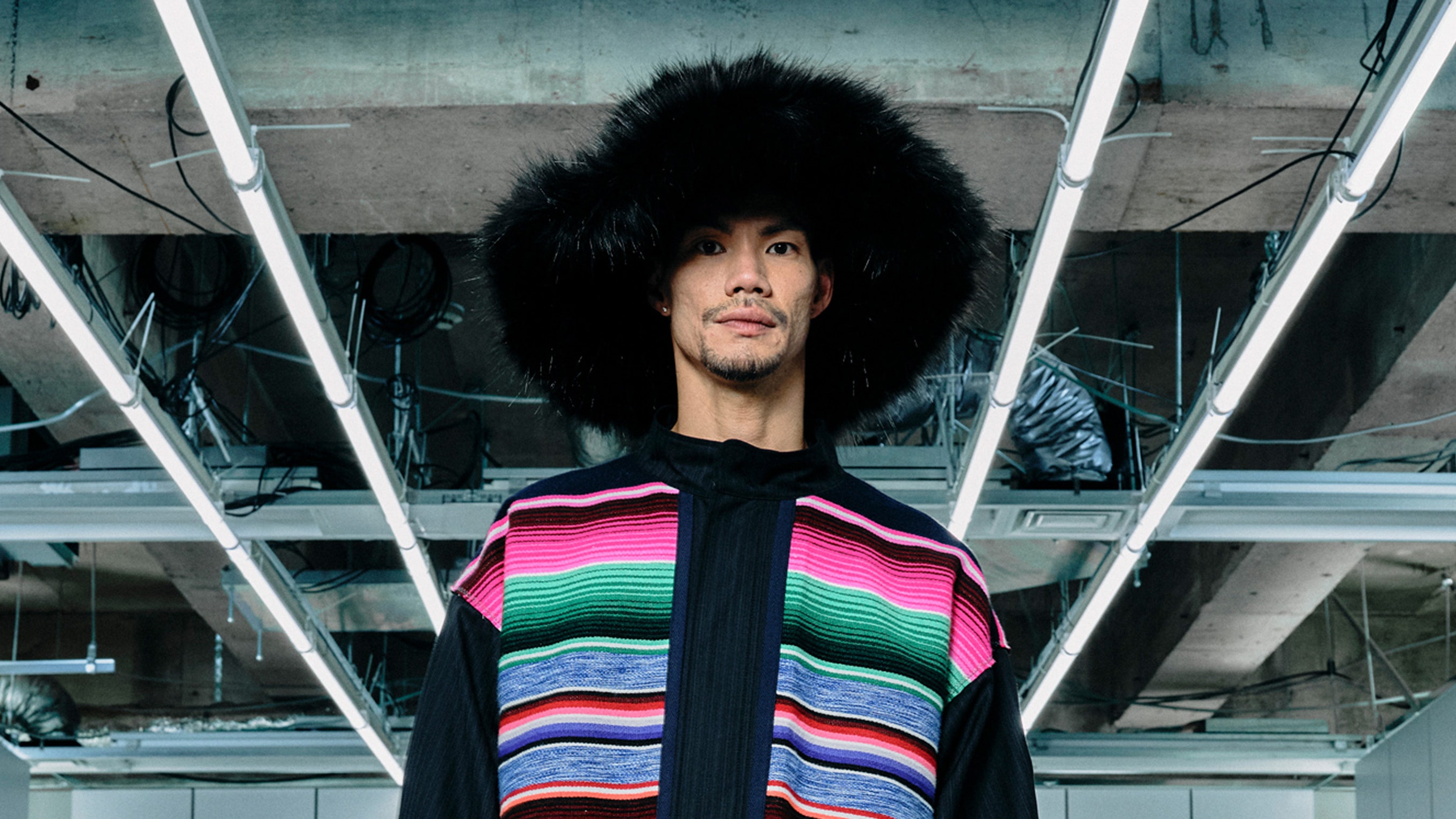 Here’s one for the Gen X-ers: a fashion reprise of Jamiroquai’s 1996 “Virtual Insanity” video. “Remixing the style of Jay Kay” was Watanabe’s title for it, with further explanation: “The name Jamiroquai was derived from the combination of jam session and the name of a Native American tribe, the Iroquois.” As a designer (himself born a Gen-Xer), Watanabe has built his men’s collection on the framework of multiple collaborations with brands and
musicians, who in his mind resonate as touchstones of authenticity.

That’s much more complicated when it comes to collaborating with Jay Kay, as will immediately hit anyone who sees Mexican serapes and Navajo blanket patterns patchworked into Watanabe’s jackets. In his ’90s acid jazz heyday, Jay Kay—a white British Mancunian—“established his own style…showing appreciation not only for the Iroquois but various indigenous cultures of the world,” as Watanabe’s press release has it.

That kind of white-hipster cultural appropriation equals opprobrium today—a discomforting (at the least) focus for Watanabe to want to pick on. In fact, the designer’s press release states, “in order to realize some of our ideas, we invited participation from the Secretariat of Culture of Mexico, as well as the renowned Pendleton Woolen Mills.” According to the Culture Secretariat’s website, the Mexican government arm, “works in favor of the preservation, promotion, and dissemination of heritage and cultural diversity. In addition, it supports the artistic creation and the development of creative industries.” Pendleton Woolen Mills, a company founded in Oregon in 1863, has a long history of trading its blankets with the Native American tribes of the Pacific Northwest. Questions about authenticity of sourcing and the ethics around that surely have to be squared before any designer sets foot on this kind of territory.

Watanabe might have pre-empted some of them; but then again, the fact that the fashion-copying, bowdlerisation, or theft, of these patterns—which has been rife at the dead-end cheap of high-street chains and street markets for decades—still makes for a bad whiff which can’t be shaken off.

Watanabe’s Jamiroquai tropes were also reflected in the top-big, bottom-skinny silhouette of the lairy ’90s lad-turned-dad generation. That consisted in oversized parkas and utility jackets worn with skinny jeans (not seen in ages); a new iteration of Watanabe’s wildly popular signature denims, patchworked with menswear tweeds and shirting bits and pieces. The London milliner Benny Andallo did the honors in replicating and riffing on Jay Kay’s outsize rep as ‘the cat in the hat’—and the three dancers did an almost exact “Virtual Insanity” re-enactment, on a white-tiled set recapturing the original look of Jonathan Glazer’s video. Will this season be enough to win over a younger generation or— maybe more to the point—will forty and fifty-something dads decide it’s still cool to relive their youths this way?

Denial of responsibility! Pedfire is an automatic aggregator of the all world’s media. In each content, the hyperlink to the primary source is specified. All trademarks belong to their rightful owners, all materials to their authors. If you are the owner of the content and do not want us to publish your materials, please contact us by email – [email protected]. The content will be deleted within 24 hours.
Fall 2022 MenswearJunya Watanaberunwayrunway_review
0
Share

Shut Up About Me on Memoir Promo Tour!