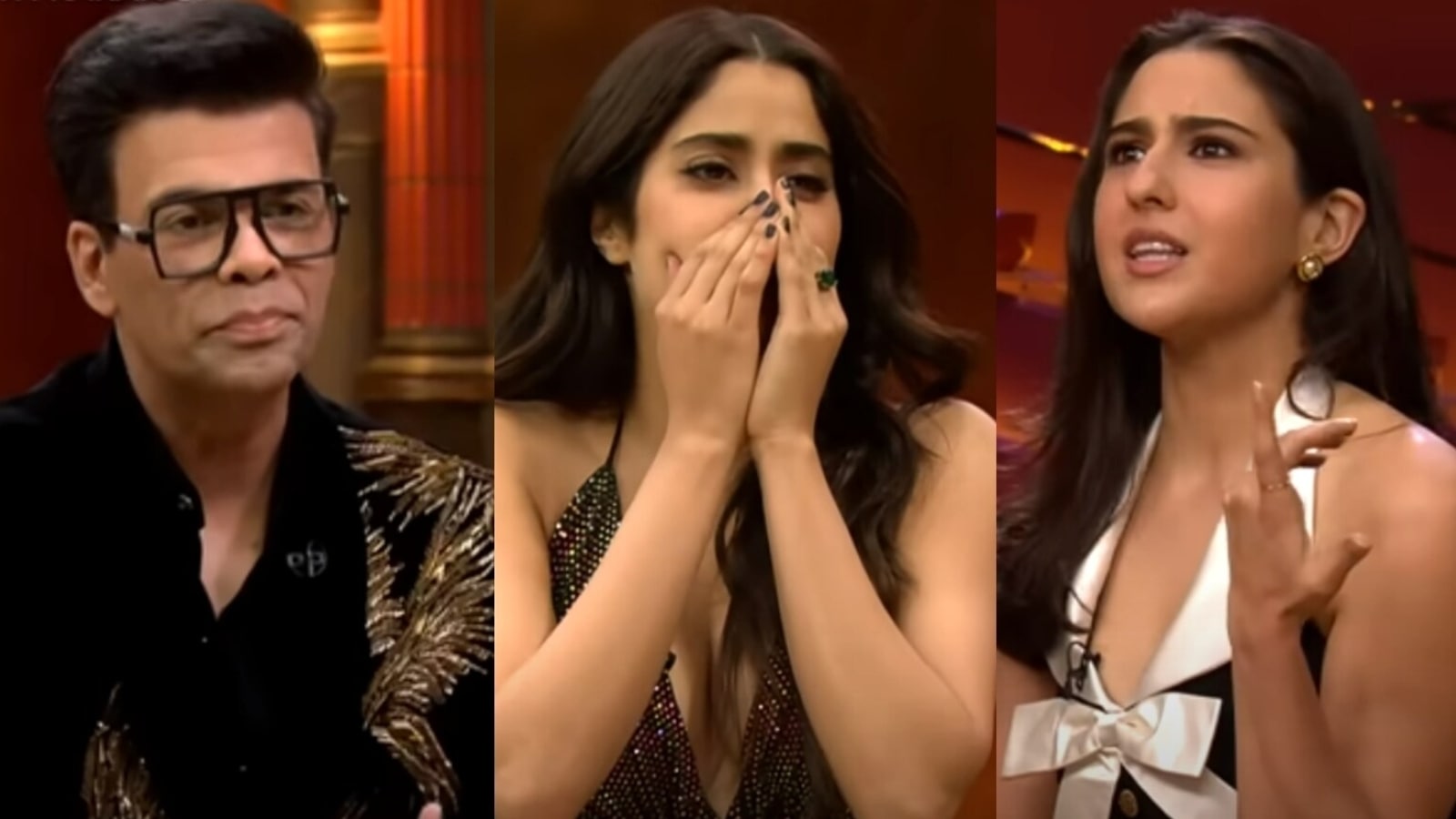 Karan Johar has finally revealed why he ended up praising Janhvi Kapoor more than Sara Ali Khan during their appearance on Koffee With Karan Season 7. The season ended, and the finale ‘award show’ episode featured Karan in conversation with social media influencers and comedians, Kusha Kapila, Tanmay Bhat, Niharika NM, Danish Sait. During their discussion, Karan denied being biased towards Janhvi over Sara on the show. Also read: Karan Johar reveals why Taapsee Pannu hasn’t been invited to Koffee With Karan yet

In the episode, Karan asked the jury members if they think he was being partial towards Janhvi over Sara Ali Khan. To this, Niharika pointed out Karan called Janhvi Kapoor ‘hot’ but questioned Sara about her broken family. Danish added, “As somebody who was raised by a single parent, I would’ve cried. That poor girl was so strong.” Kusha Kapila mentioned how Karan commented about ‘who’s hotter, who’s frugal with money, who’s going to get the next Dharma project.” “At one point you actually told Janhvi I’ll give you a project. For you, nothing, Sara! You take my hamper Sara.”

Answering all the accusations, Karan said, “I just want to tell everyone, in my defense, I love Sara. She is also working with us. She is doing two feature films with us, back to back.” He went on to reveal how a technical error on the show, declared Janhvi was the winner of the rapid-fire round but later it was rectified that Sara is the actual winner. While the portion of the show didn’t make it to the show, it made Karan feel guilty.“ Because I felt so guilty I started calling her (Janvhi Kapoor) hot,”

“This entire boo boo got cut on the show and it came across like I was partial to Janhvi,” the filmmaker explained his situation. The eliminated portion from the Sara-Janhvi episode was also aired while Karan revealed what actually happened on the show. Sara and Janvhi appeared on the second episode of Koffee With Karan 7. Besides them, celebrities like Alia Bhatt, Ranveer Singh, Vicky Kaushal, Katrina Kaif, Siddharth Malhotra, Gauri Khan and Ishaan Khatter among others were also a part of this season.

Denial of responsibility! Pedfire is an automatic aggregator of the all world’s media. In each content, the hyperlink to the primary source is specified. All trademarks belong to their rightful owners, all materials to their authors. If you are the owner of the content and do not want us to publish your materials, please contact us by email – [email protected].com. The content will be deleted within 24 hours.
Janhvi Kapoorkaran johar on bashing sara ali khan on koffee with karankaran johar on defending janhvi Kapoorkaran johar reveals why he defended praised janhvi kapoorkoffee with karan 7sara ali khan
0
Share