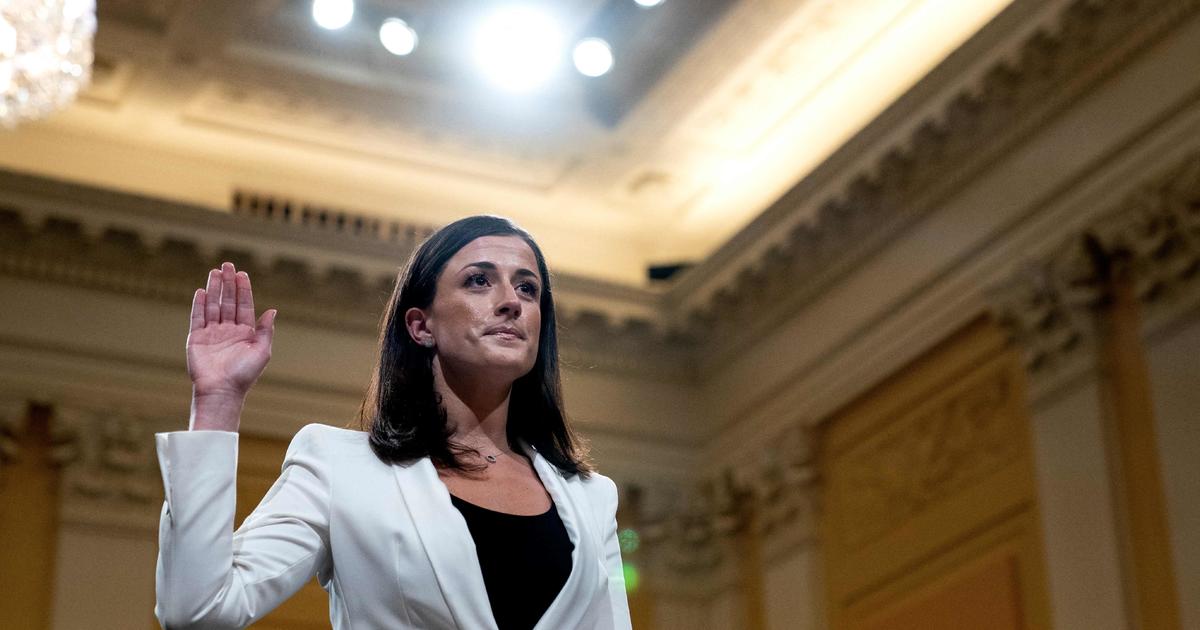 BOSTON — Jarring new details were revealed Tuesday about the January 6 attack on the Capitol.

“Complainants both saw stock of an AR-15…They had Glock-style pistols in their waistbands…make sure PPD knows they have an elevated threat in the trees south side of Constitution Avenue..Look for the ‘Don’t Tread On Me’ flag.”

These stark accounts of anxious police voices over their radios on January 6, 2021 were played at Tuesday’s hearing of the House Committee probing the attempted insurrection, utterly debunked one of the early myths about the Capitol riot – that the participants were unarmed. In fact, some were heavily armed.

Even before the latest testimony, new CBS polling showed more than half of independent voters had been persuaded that then-President Trump actually tried to overthrow the government, more than three times the number of Republicans who agree.

On Tuesday, witness Cassidy Hutchinson, an aide to Trump Chief of Staff Mark Meadows, testified she heard Trump actually call for weapon-detecting magnetometers to be removed from the Capitol perimeter so more of his armed partisans could join the charge.

She laid bare Trump’s insistence after his infamous January 6th speech on leading the mob right up to the Capitol to disrupt electoral vote certification, over the objections of Secret Service agent Bobby Engel, the head of the president’s protective detail: “The president said something to the effect of ‘I’m the f-ing president, take me up to the Capitol now.’ To which Bobby responded ‘sir, we have to go back to the West Wing.’ The president reached up towards the front of the vehicle to grab at the steering wheel. Mr. Engle grabbed his arm and said ‘sir, you need to take your hand off the steering wheel.'”

Hutchinson’s compelling testimony concluded with a statement about that day that a slowly-growing majority of voters seem to be internalizing: “It was unAmerican, we were watching the Capitol building get defaced over a lie.”

It has become increasingly clear that these hearings are an evolving process, presenting disturbing evidence that is fueling growing voter skepticism of Trump and his GOP defenders and, the committee hopes, persuading reluctant witnesses to come forward.

It’s still not clear what this mounting pressure will produce in the end. But if Trump partisans thought the hearings would be a harmless dud, it’s time to think again.

Jon Keller is Political Analyst for WBZ-TV News, and his “Keller @ Large” reports on a wide range of topics are regularly featured during WBZ-TV News at 5 and 6 p.m. Keller’s commentaries are also seen weekday mornings at 5:30 a.m. on WBZ This Morning.

Denial of responsibility! Pedfire is an automatic aggregator of the all world’s media. In each content, the hyperlink to the primary source is specified. All trademarks belong to their rightful owners, all materials to their authors. If you are the owner of the content and do not want us to publish your materials, please contact us by email – [email protected]. The content will be deleted within 24 hours.
Donald TrumpKeller @ Large
0
Share

How to Stop Robots From Becoming Racist

‘The carnage, it’s awful.’ Family of…

Marvel’s Avengers is getting a new hero: Bucky Barnes as the…

Chanel Ayan Tells the Story of Her Circumcision