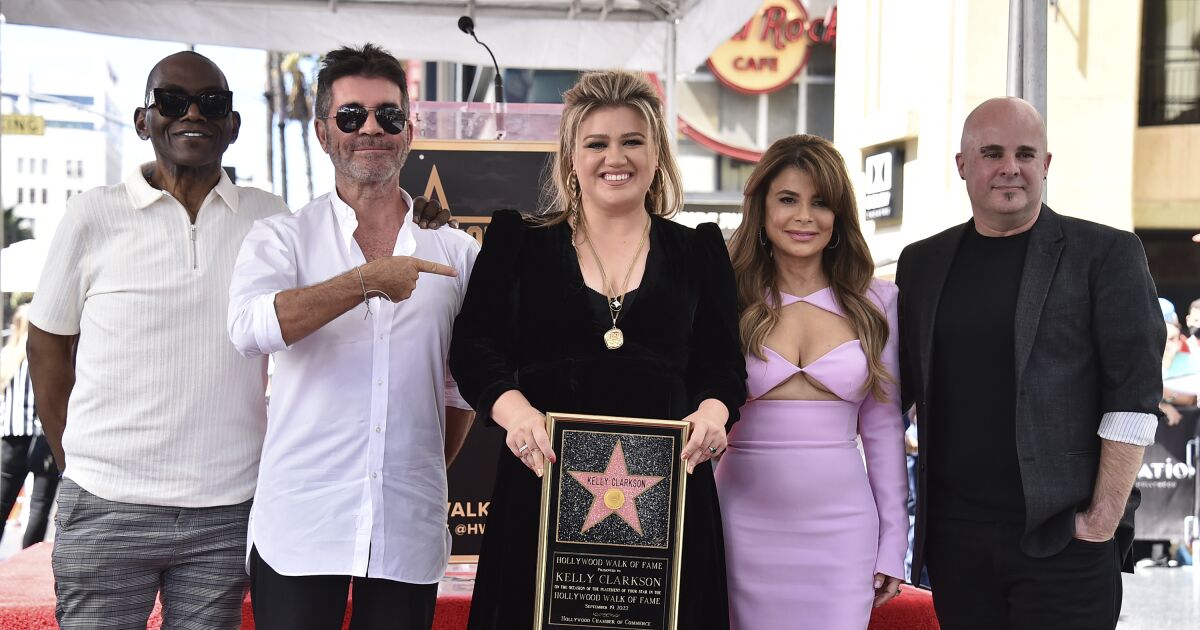 For Kelly Clarkson, her Walk of Fame ceremony was a homecoming.

Twenty years ago this month, Clarkson wowed Hollywood as the inaugural winner of ABC’s “American Idol” in 2002. On Monday, she returned to the famed Los Angeles boulevard to celebrate not only herself, but also the team that launched her stardom.

“I think [it’s] important to have not just ‘yes’ people around you, but people that actually love you and care about you and give their honest advice. I’ve always welcomed that, and I think that is why I’m here today,” Clarkson, 40, said upon receiving the Walk of Fame’s 2,733rd star.

Clarkson, in a black velvet gown, delivered her acceptance speech amid cheering outbursts from excited fans who watched from the Ovation Hollywood mall — including through the window of a nearby Walgreens and the upper-level balconies next to the Dave & Buster’s.

The ceremony, held at 6801 Hollywood Blvd. in front of Ovation Hollywood, also featured speeches from Halbert, Cowell and Abdul.

“Her voice was a gift she was born with, and I believe it’s unmatched by anyone alive,” Halbert said. “But it’s her authenticity and her heart that has captured the soul of America and the world these past 20 years.”

“She’s used her voice to give a vocabulary to us who have suffered heartache, pain and suffering. She’s given us anthems to celebrate love and songs to mark the milestones in our lives.”

Similarly, Cowell remembered thinking that Clarkson was going to win the ABC singing competition after hearing her perform Aretha Franklin’s “Respect.” He also recalled how Clarkson asked that they didn’t speak to each other until the end of the competition. She clarified that she wanted to be “respectful” of the competitive environment.

“I remember that moment when your name was called, and I was thinking to myself, ‘Thanks to you, we may have another season,’” he quipped to Clarkson. “I can honestly say, ‘Thanks to you, I’m here today.’”

Born in Fort Worth, Texas, Clarkson has scored a number of hits, including “A Moment Like This,” “Since U Been Gone,” “My Life Would Suck Without You” and “Stronger (What Doesn’t Kill You),” while racking up three Grammy Awards out of 15 nominations.

Beyond music, Clarkson has served as a judge and mentor on ABC’s “Duets” and NBC’s “The Voice.” And in 2019, she launched her own daytime talk show, “The Kelly Clarkson Show,” which has received numerous Daytime Emmy nominations.

John Boyega Only Dates Black Women. Get Over It.