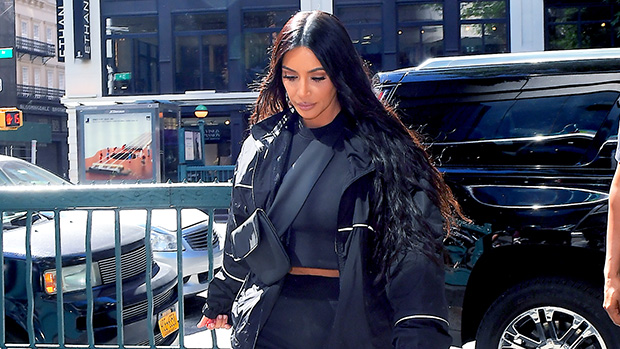 Kim Kardashian doesn’t do anything halfway. The reality TV icon and SKIMS founder, 42, took to Instagram on Monday, November 21, to prove that even her thigh high boots go straight to the top! In the mirror selfie, Kim was seated in her massive closet on a beige couch, rocking baggy, leather stiletto boots that climbed all the way up her thighs. She paired the statement footwear with a pair of the tiniest striped, black athletic shorts and a grey Adidas activewear top. She wore her platinum blonde locks long and straight, and rows of clothing could be seen hanging behind her. “Hey,” she cheekily captioned the photo for her 333 million followers.

Plenty of Kim’s followers were there for the look, and took to the comments thread to gush. Among them was iconic Body Double actress Melanie Griffith, 65. “You even make bag boots sexy!!!” she exclaimed. “Lately you’ve been dressing for revenge,” quipped a fan. Others were less vague, and pointed out that Kim was wearing Adidas — just weeks after the brand dropped her ex-husband Kanye West, 45, as a collaborator over his infamous antisemitic remarks. “The shade is unreal,” reacted a follower, while another joked, “Petty queen wearing Adidas.”

Still others were seemingly in complete disbelief over the mom of four‘s choice of branded attire. “Adidas? Really?” wrote one follower. “All of a sudden she wears ADIDAS,” wrote another. “A clear message.”

Kim’s latest fashion statement, charged though it may be, certainly doesn’t come as a surprise. She’s distanced herself in a variety of ways since Kanye began courting controversy with his antisemitic Twitter rants and White Lives Matter shirts. According to a source close to the star, Kim found the antisemitic tweets “completely out of line.”

“After everything Kanye has done lately and all the controversial remarks and stances he’s taken, Kim just wants to distance herself as much as humanly possible from all this drama surrounding Kanye,” the source told HollywoodLife EXCLUSIVELY in October. “Kim has told him she wants nothing to do with him when he acts like this, but Kanye doesn’t seem to care.”

It’s worth noting that Kim was also seen wearing a pair of Yeezy Slide Scoot shoes from her ex’s line on Sunday, November 20, while she was out shopping with North.