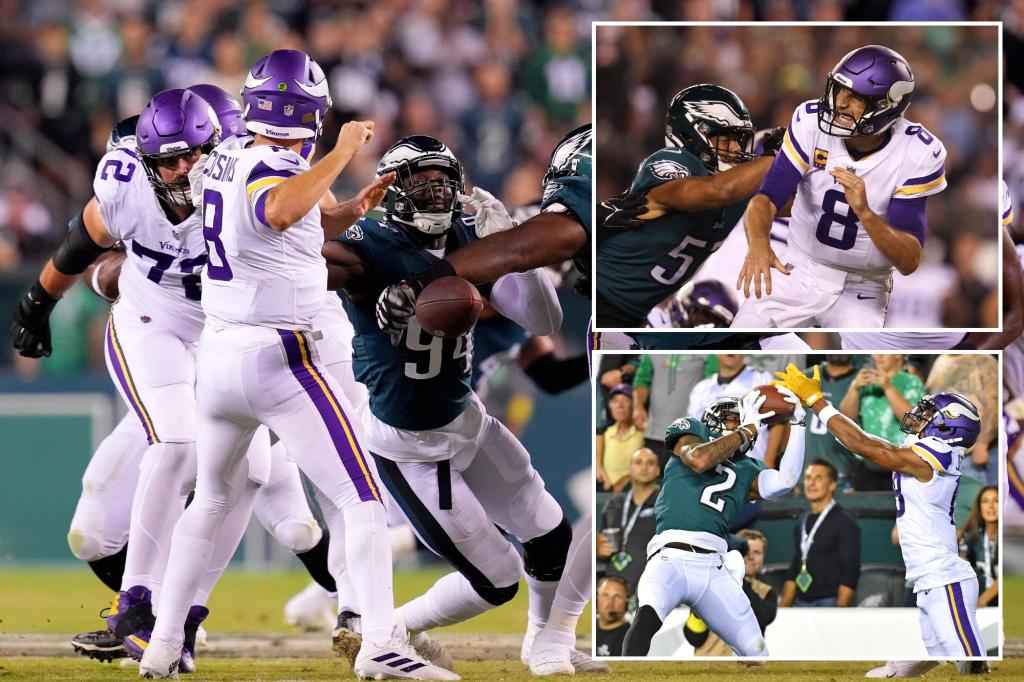 A new coach, a receiver emerging as the most talented in the league, but still the same Kirk Cousins.

After a week of optimism following a dismantling of the Packers in their opener, the Vikings crashed back to reality on Monday night in a 24-7 loss to the Eagles. Cousins threw three interceptions — all in the end zone — and the Eagles dropped several more in the dominant victory.

“I think that getting behind early we probably had to throw a little more often than we would have liked, and didn’t stay as balanced as we’d like to be, and it’s probably more just the nature of how the game went, and we certainly want to be balanced as best we can,” Cousins told reporters afterwards.

The Vikings were down a touchdown almost immediately after Jalen Hurts rushed for his first touchdown of the night on the Eagles’ first drive. Dalvin Cook was limited to six carries for 17 yards on the night.

“I thought Kirk battled tonight,” first-year coach Kevin O’Connell said. “Put him in some tough spots, and I think our overall offensive philosophy, when we do not succeed in activating those things, it puts a lot of pressure on the quarterback, and that’s where I once again put this one 100 percent on me.”

The hope in Minnesota was that O’Connell could take Cousins to the next level after years of working under Rams coach Sean McVay.

“We wanted to come into this game and just dominate, especially after last week’s performance,” Jefferson said. “But we definitely had plenty of opportunities to score the ball and make something happen, carry the momentum to our side. We didn’t execute on the offensive side.”

“I’ve got to be flatter if Slay’s going to sit on that type of route. I’ve got to come flatter and be in front of him instead of going behind him,” Jefferson said. “So, that one’s on me.”

Cousins’ third pick came on a lob that Slay snagged again and sealed the win.

“He’s a competitor for sure. I knew that I was going to get that from him,” Jefferson said. “I mean, he’s a great cornerback. He’s a great player. A great guy, too. We definitely could’ve had some more opportunities out there to score and put up points, and we just didn’t.”

Cousins finished the game 27-of-46 for 221 yards and one touchdown.

“I think their defense deserves credit,” Cousins said. “They did a good job with rush and with coverage, and the combination made it tough for us.”