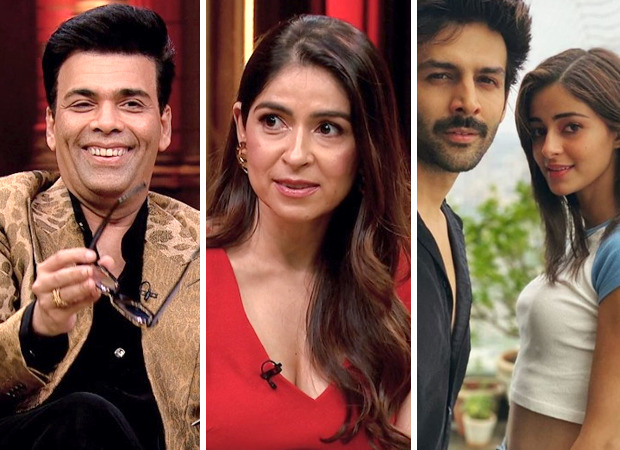 With popularity comes the invite to the coffee couch. Flying high on the popularity of the series Fabulous Lives Of Bollywood Wives, Bhavana Pandey made her debut on Koffee With Karan 7 with Maheep Kapoor. They arrived along with Gauri Khan who returned to Koffee With Karan after around 17 years.

During the show’s popular rapid-fire segment, when Karan Johar asked Bhavana Pandey, “Who do you think Ananya looks best with?” The options included Ananya’s several co-stars including Pati Patni Aur Woh co-star Kartik Aaryan, Student Of The Year 2 star Tiger Shroff, Khaali Peeli star Ishaan Khatter and Gehraiyaan and Kho Gaye Hum Kahan co-star Siddhant Chaturvedi. Bhavana Pandey tried her best to be politically correct with her answers and said, “I think she looks best with Kartik, acts best with Ishaan, dances best with Tiger,” before Karan interrupted her and called it a ‘rubbish answer’. He said, “I don’t want your politically correct answers.”

She then said that her daughter looks best on-screen with Kartik Aaryan. Karan was quick to ask her, “Then why did they break up? They should have kept it together if they looked so good.” Bhavana responded, “Never say never. You never know.”

Interestingly, during Gauri Khan’s rapid-fire round, when asked what dating advice she would give daughter Suhana, Gauri said, “Don’t date two boys at the same time.” As Bhavana agreed, Karan quipped, “I think Ananya has already done that. She was oscillating.” Bhavana quickly clarified, “She was thinking of two, so she could break up with one.” It seemed like he hinted that Ananya Panday’s break-up with Ishaan Khatter while rumours of her dating Vijay Deverakonda were floating, though she denied romance rumours with her Liger co-star.

On the work front, Bhavana Pandey was most recently seen in Fabulous Lives Of Bollywood Wives 2. The series has been reportedly renewed for a third season.