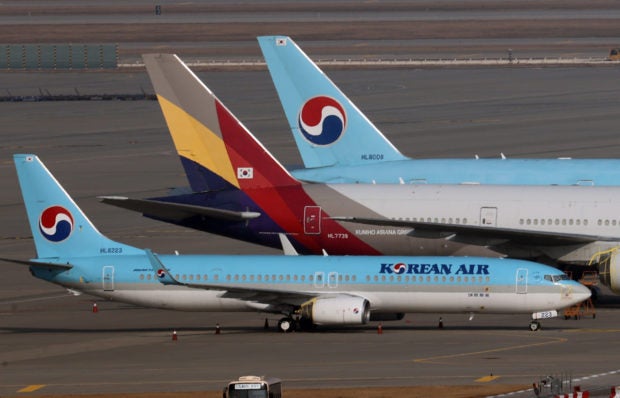 Announcing a plan to help Korean Air Lines acquire a majority stake in its longtime rival, KDB said Monday that the merger is indispensable in keeping the nation’s struggling aviation industry afloat.

“The new integrated Korean flag carrier will rise to one of the top 10 most competitive players in the global aviation industry, laying the groundwork to cope with the coronavirus crisis with efficiency and to leap forward in the post-pandemic era,” KDB Chairman Lee Dong-gull said, adding that the state-run bank has been striving to find a plausible buyer.

The proposed deal will help KDB “minimize the volume of state capital to normalize the aviation industry and retrieve its financing to the companies,” Lee said.

The remark came three months after the proposed buyer of Asiana Airlines, HDC Hyundai Development Co., scrapped its contract to buy the indebted aviation firm with its main creditor KDB.

KDB Vice President Choi Dae-hyun said KDB reached out to numerous candidates after the 2.5 trillion-won acquisition deal collapsed, with Hanjin KAL being one of them.

Under the plan, KDB will inject 800 billion won in Hanjin KAL, a major stakeholder of Korean Air Lines, by buying 10.6 percent of common shares and exchangeable bonds in a capital increase in December.

Subsequently, Korean Air Lines will raise 2.5 trillion won with new ordinary shares in the first quarter of 2021. Of the total, Hanjin KAL will acquire shares worth 730 billion won. The rest, 1.77 trillion won, will be raised from an employee stock ownership plan, existing Korean Air shareholders and possibly public investors.

Using the proceeds, Korean Air Lines will buy 1.5 trillion won of new common shares by June 2021 through its installment payment, as well as 300 billion won worth of perpetual bonds issued by Asiana Airlines by end-2020.

This allowed KDB to spend no more than 800 billion won under the deal. Otherwise, KDB would have spent a combined 4.8 trillion won on both Korean Air and Asiana by the end of 2021, Choi said.

The plan appears to have garnered support at a pangovernmental meeting held earlier Monday. According to a statement by the Ministry of Land, Infrastructure and Transport, the government has conceded its argument that there needs to be at least two national flag carriers, saying the tie-up will help both Korean Air and Asiana overcome the coronavirus crisis.

The plan, however, is likely to be contested by a shareholder group led by private equity fund Korea Corporate Governance Improvement.

KCGI demanded Monday that Hanjin KAL give other shareholders including the consortium a fair chance to take part in the company’s capital increase plan, after the KDB announcement that KDB will solely participate in the deal. KDB said the new 10 percent voting rights in Hanjin KAL do not translate into ones supporting Hanjin Chairman Cho Won-tae.

global economy: Global economic recovery would be back in 2021: PECC report

Bank regulator calls for dividends to remain on hold