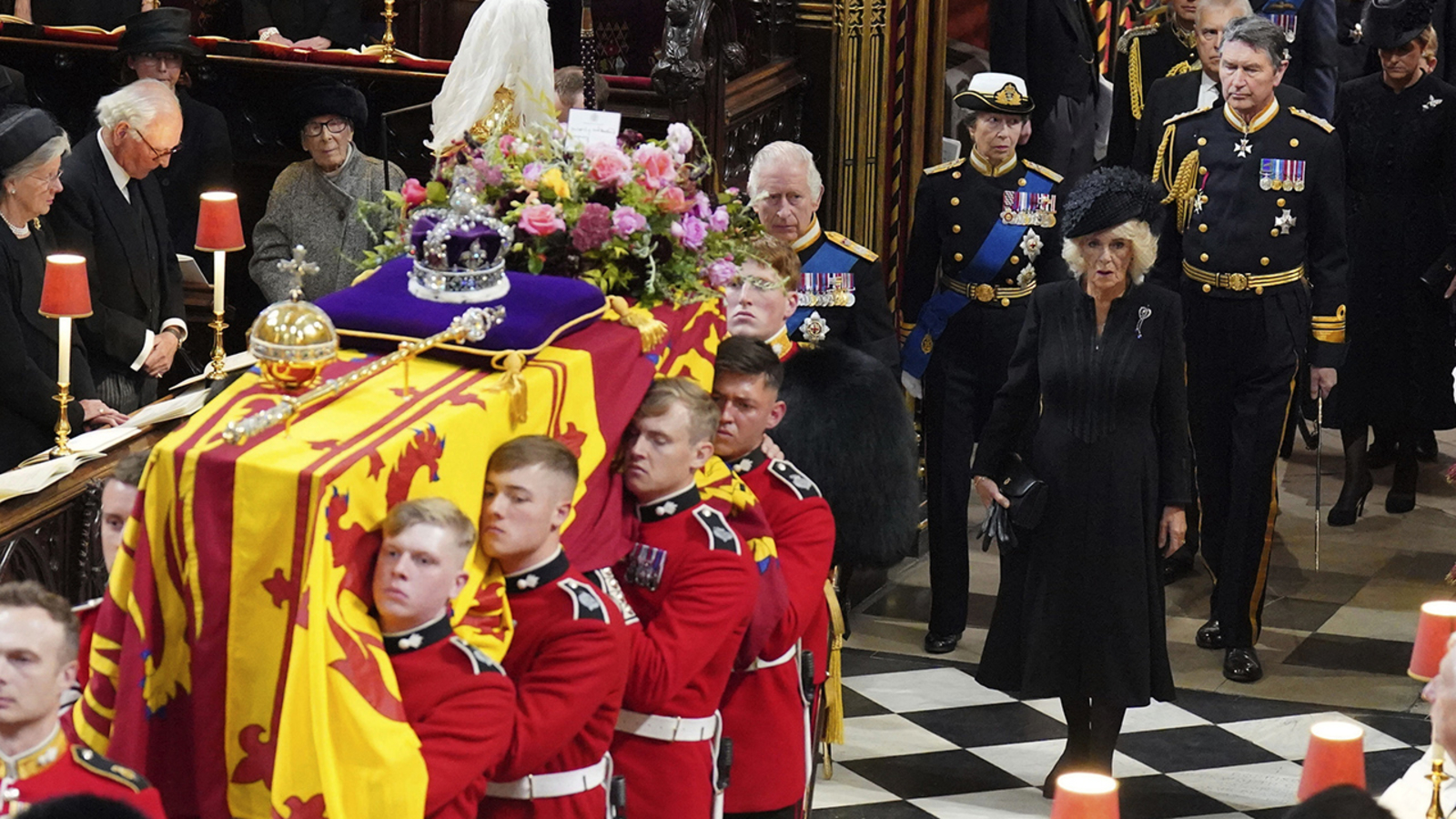 LONDON — Britain and the world said a final goodbye to Queen Elizabeth II at a state funeral Monday that drew presidents and kings, princes and prime ministers — and crowds who massed along the streets of London to honor a monarch whose 70-year reign defined an age.

Stream live coverage of the funeral for Queen Elizabeth II in the player above.

In a country known for pomp and pageantry, the first state funeral since Winston Churchill’s was filled with spectacle: Ahead of the service, a bell tolled 96 times — once a minute for each year of Elizabeth’s life. Then, 142 Royal Navy sailors used ropes to draw the gun carriage carrying her flag-draped coffin to Westminster Abbey before pallbearers bore it inside the church, where around 2,000 people ranging from world leaders to health care workers gathered to mourn her.

The trappings of state and monarchy abounded: The coffin was draped with the Royal Standard and atop it sat the Imperial State Crown, sparkling with almost 3,000 diamonds, and the sovereign’s orb and scepter.

But the personal was also present: The coffin was followed into the church by generations of Elizabeth’s descendants, including King Charles III, heir to the throne Prince William and 9-year-old George, who is second in line. On a wreath atop the coffin, a handwritten note read, “In loving and devoted memory,” and was signed Charles R — for Rex, or king.

“Here, where Queen Elizabeth was married and crowned, we gather from across the nation, from the Commonwealth, and from the nations of the world, to mourn our loss, to remember her long life of selfless service, and in sure confidence to commit her to the mercy of God our maker and redeemer,” the dean of the medieval abbey, David Hoyle, told the mourners, as the funeral opened.

The service drew to a close with two minutes of silence observed across the United Kingdom, after which the attendees sang the national anthem, now titled “God Save the King.”

The Duke and Duchess of York at the christening of their daughter Princess Elizabeth in 1926. (Universal Images Group via Getty Images)

The day began early when the doors of Parliament’s 900-year-old Westminster Hall were closed to mourners after hundreds of thousands had filed in front of her coffin. Many had waited for hours in line, including through cold nights, to attend the lying in state in an outpouring of collective grief and respect.

“I felt like I had to come and pay my final respects to our majestic queen. She has done so much for us and just a little thank you really from the people,” said Tracy Dobson, who was among the last to join the line.

Monday was declared a public holiday in honor of Elizabeth, who died Sept. 8 — and hundreds of thousands of people descended on central London to partake in the historic moment. They jammed the sidewalks to watch the coffin wend its way through the streets of the capital after the service. As the procession passed Buckingham Palace, the queen’s official residence in the city, staff stood outside, some bowing and curtseying.

Millions more tuned into the funeral live on television, and crowds flocked to parks and public spaces across the U.K. to watch it on screens. Even the Google doodle turned a respectful black for the day.

Archbishop of Canterbury Justin Welby said in his sermon that “few leaders receive the outpouring of love we have seen” for Elizabeth.

After the passage through central London, the coffin was placed in a hearse and headed for Windsor Castle — where Elizabeth spent much of her time. Mourners threw flowers at the convoy as it passed.

There will be another procession in Windsor before a committal service in St. George’s Chapel. The queen will be laid to rest with her late husband, Prince Philip, at a private family service.

On the evening before the funeral, Charles issued a message of thanks to people in the U.K. and around the world, saying he and his wife Camilla, the queen consort, have been “moved beyond measure” by the large numbers of people who have turned out to pay their respects to the queen.

People across Britain paused for a minute of silence at 8 p.m. Sunday in memory of the only monarch most have ever known. At Westminster Hall, the constant stream of mourners paused for 60 seconds as people observed the minute of reflection in deep silence.

In Windsor, rain began to fall as the crowd fell silent for the moment of reflection. Some camped overnight outside the castle in order to reserve the best spots to view the queen’s coffin.

Jilly Fitzgerald, who was in Windsor, said there was a sense of community among the mourners as they prepared to wait hours to see procession carrying the queen’s coffin.

“It’s good to be with all the people who are all feeling the same. It’s like a big family because everyone feels that … the queen was part of their family,” she said.

Copyright © 2022 by The Associated Press. All Rights Reserved.

Denial of responsibility! Pedfire is an automatic aggregator of the all world’s media. In each content, the hyperlink to the primary source is specified. All trademarks belong to their rightful owners, all materials to their authors. If you are the owner of the content and do not want us to publish your materials, please contact us by email – [email protected]. The content will be deleted within 24 hours.
king charlesLive stream coverage of royal funeralMeghan MarkleQueen Elizabeth DeathQueen Elizabeth II Funeralqueen funeral liveRoyal Familyroyal funeral procession
0
Share

5 things to know before the stock market opens Monday, September 19