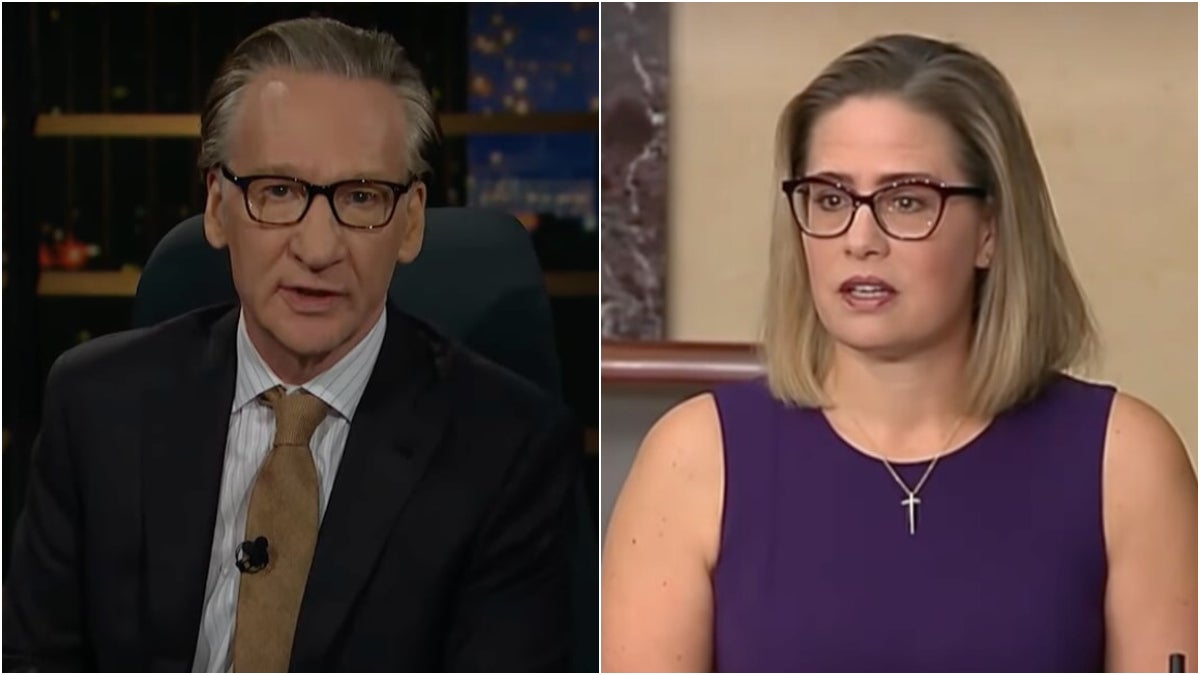 In his monologue on Friday’s episode of “Real Time,” Bill Maher was thrilled by the news that, at least at the moment, it looks like the Democrats are going to pass a fairly robust bill to combat climate change.

But he took some time to mock contrarian Arizona Senator Kyrsten Sinema for holding the bill up in order to squeeze concessions that benefit wealthy hedge fund managers.

For those in need of a catch up, on Friday Sinema ended her latest narcissistic parading by announcing she’s agreed to support the bill. Her sticking point had been a part of the bill that would have made minor changes to the so-called “carried interest loophole,” a tax law quirk that allows executives at private equity firms and hedge funds to pay lower taxes than their employees. She supports the loophole and demanded that provision be removed from the bill.

Interestingly, Sinema has made no public statements explaining her demand. Nevertheless, Democrats agreed to strike the provision and so she says she’ll support the bill. Of course, she’s broken her promises multiple times, but for now at least it appears she won’t do anything further to damage the bill.

Now back to Maher, who kicked off his monologue saying “Biden got COVID, again, and had the best week of his presidency. I don’t know if this is related but today Kamala Harris was seen rubbing herself with a coughing monkey.”

Maher riffed on Biden’s declaration that Monkeypox is a public health emergency, joking, “I’ve had it with viruses, I really have. First I couldn’t have unprotected gay sex. Then I couldn’t eat at a Chinese wet market. Now I can’t play in waste water? F— this.”

Then he resumed talking about the political news. “Jobs, way up. I mean, like crazy up. We’ve gotten all the jobs back from the pandemic, unemployment is 3.5%, gas prices way down, and he got his big climate bill today,” Maher said.

“Kristin? Kyrsten Sinema from Arizona, you familiar with her?” Maher continued. “She joined up. it’s good to see the Democrats can be bipartisan with themselves.”

“She was holding this up for something called the carried interest loophole. This is very important to her. They gave it up,” Maher said. “It’s something only hedge fund managers care about. Do you care about this? She looked around Scottsdale and said ‘it’s about time someone stood up for the wealthy.’”

Maher also had a pretty good joke about Republican opposition to the climate bill: “This is the big climate bill, not one Republican voted for it. It’s gonna be 50 plus the Vice President passing this thing. You know, environment? They’re just not into it. If there was just some way to get the Earth pregnant.”

Watch the whole monologue above.

You Must Meet this Furry Skateboard Fan!

Apply For 66 Scientist B Posts Before August 19| Details…

How to play Netflix’s mobile games