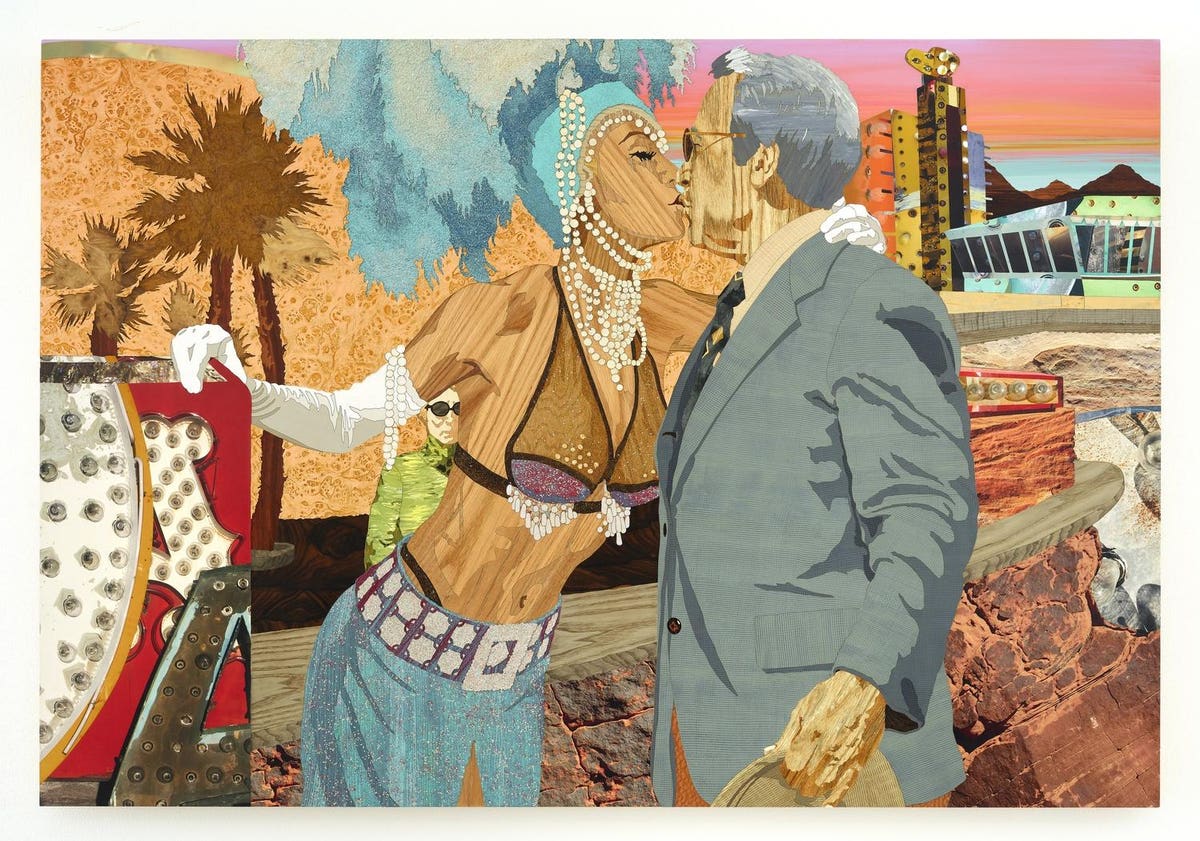 Marquetry as an artform predates ancient Egypt. Elaborate patterns and intricate designs are created through the insertion of small bits of wood, shell, ivory or other items into a veneer of wood, with that thin decorative layer then applied to another object, typically furniture.

Updating the practice to address contemporary concerns employing a groundbreaking figurative vision, Alison Elizabeth Taylor (b. 1972; Las Vegas, NV) has ridden marquetry all the way to the 2022 National Portrait Gallery Outwin Boochever Prize, the nation’s highest honor for portraiture. The competition is held only every three years.

On the heels of that achievement, Taylor’s first retrospective can be seen now through January 15, 2023 at the Des Moines (IA) Art Center.

How does a contemporary artist begin working in marquetry?

“I started art school and when I got there, I was told that painting was dead,” Taylor told Forbes.com of her time in the fine art department at ArtCenter College of Design in Pasadena, CA during the late 1990s.

She began searching for workarounds and while wood veneers were too expensive, wood grain shelving paper at a 99-cent store interested her. She began using the material in her paintings, eventually making something that looked like wood inlay out of contact paper. While tacky and “cheap,” it possessed an aesthetic quality that intrigued her.

During graduate school at Columbia in New York, she would visit the Metropolitan Museum of Art. There, she found the Duke of Urbino’s fifteenth-century Studiolo, an entire room from the Renaissance done in intarsia, which is like marquetry, but thicker. She was further intrigued, deciding to learn marquetry in grad school, mostly using the internet because the practice was so out of step with anything taking place in her classes.

“What are you doing?” she remembers being asked routinely. “I got a lot of energy from the pushback.”

Energy she would need for the laborious process of marquetry.

“I’ll start with sketching, then I’ll make a little gouache painting in color, then I scale that up to whatever the piece is going to be. I do a really detailed graphite drawing and then I make it into graphic shapes–another drawing over top of that where it becomes graphic shapes,” Taylor explains of the steps required along the way to a finished piece. “Then I can take all those shapes and cut them with an X-Acto (knife)–most of it I cut on a laser cutter–and then I pull all these shapes back together, tape them together and glue them down to a board which I make into a panel, then sand it, shellack it, then paint or collage on top of it.”

“Alison Elizabeth Taylor: The Sum of It” features approximately 40 large-scale single panel works, as well as a room-sized installation, tracing the evolution of her exploration with marquetry.

“(I) became obsessed with doing it and figuring out ways to make it work, first just with raw wood, and when I figured (that) out, how to combine this media with painting and other things,” Taylor said, the work she produces now a hybrid with marquetry, painting and photo texture collage. “When you study drawing and painting, you learn how to build up an image, but when you’re doing marquetry hybrid, you’re having to break your image into pieces and then put it back together and the whole thing could collapse in the middle of that process. It feels like you’re on a tightrope. It’s like a high-stress activity and I’m an anxious person and somehow that works.”

The portrait for which Taylor won the Outwin features Brooklyn barber Anthony Payne whom she met in June 2020–peak New York City lockdown.

“I was walking my kids around to wear them out–we would go on these epic walks–and we’d go under the (Williamsburg) bridge and he would be there cutting hair; they were always like, ‘what is he doing?’” Taylor remembers. “His salon was shuttered and he decided that he was going to cut hair in front of his apartment. As soon as he got set up, it started to rain, so then he moved kitty corner under the bridge. He hung this big fancy mirror on the chain link (fence) and it just became this thing.”

Payne acquired local celebrity, his popularity requiring him to cut hair from near sunup to sundown.

“It was this very uplifting symbol. His action was such an example of an adaptation and making the best of things and resilience and I felt like it was a symbol for the whole neighborhood,” Taylor said. “Everybody saw him doing that and we’re all like, ‘well, how can I apply that in my life?’ Everything’s changed, all my conditions have gotten really poor, but how can I pivot and make my life work under these conditions?”

Taylor sketched and photographed Payne, creating two different portraits of him in different light conditions. The Outwin artwork remains at the National Portrait Gallery in Washington, D.C. while the other version is on view in the exhibition.

Anthony Cuts under the Williamsburg Bridge, Morning (2020) exemplifies Taylor’s daring and inventive fusion of the centuries-old practice with gritty and provocative subject matter. Unequivocally modern stories told through an historic lens. The exhibition highlights her talents in equal measure as an artist, craftsman, storyteller and chronicler of 21st-century American culture. Something of a Renaissance woman, apropos considering her chosen medium.

“The Sum of It” has been organized by the Addison Gallery of American Art in Andover, MA where the show will travel in 2023 following its run in Des Moines.

Denial of responsibility! Pedfire is an automatic aggregator of the all world’s media. In each content, the hyperlink to the primary source is specified. All trademarks belong to their rightful owners, all materials to their authors. If you are the owner of the content and do not want us to publish your materials, please contact us by email – [email protected]. The content will be deleted within 24 hours.
Alison Elizabeth TaylorAnthony Paynemarquetry
0
Share

P-22 to be captured for ‘evaluation’ after killing, attacking dogs