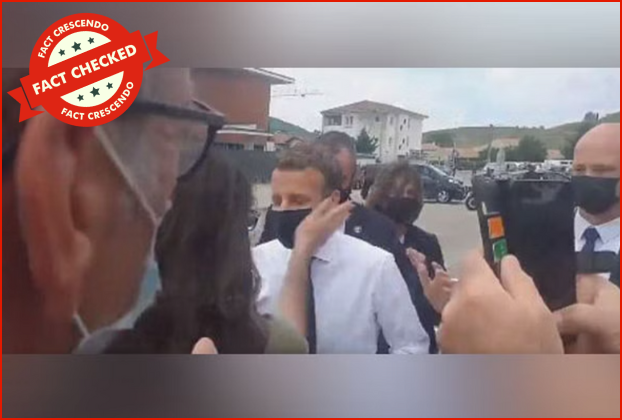 The video shows an incident from 2021 where France President Emmanuel Macron was slapped by a man during his visit to a town in Southeast France.

Users claim that the incident of France President Emmanuel Macron getting slapped in public is a recent incident.

However, we found that later ANI had issued a correction stating that ‘Correction | This story has been retracted, the viral video is an old video which was circulated again. Error regretted.’

Moving on, we found that several media organization such as the Print, Times Now, Hindustan Times published the same video as a recent incident.

Soon after, we found social media users sharing the video as recent. A verified Twitter user named Luke Rudkowski posted the video with the caption, ‘Emmanuel Macron got slapped up again’ on 20 November 2022.

We started our investigation by running a keyword search on Google, whose results led us to a news report by the BBC published on 8 June 2021. The headline of the video states, “France President Emmanuel Macron slapped in the face.”

French President Emmanuel Macron was slapped in the face on an official visit to the southeast of France. He is seen walking up to a barrier on a trip to Tain-l’Hermitage outside the city of Valence. Two men have been arrested following the incident.

According to CNN, the man who slapped Emmanuel Macron had yelled “down with Macron” – as Macron spoke to the public during a visit to southeast France.

According to the Associated Press, French President Emmanuel Macron was slapped in the face by a man during a visit to a small town in southeast France on 8 June 2021.

Fact Crescendo found the claim made along with the viral video to be Misleading. The video shows an incident from 2021 where France President Emmanuel Macron was slapped by a man during his visit to a town in Southeast France.

Infiniti finally gets it right with QX60 – Boston Herald

Russia must face a reckoning over Ukraine or history will…