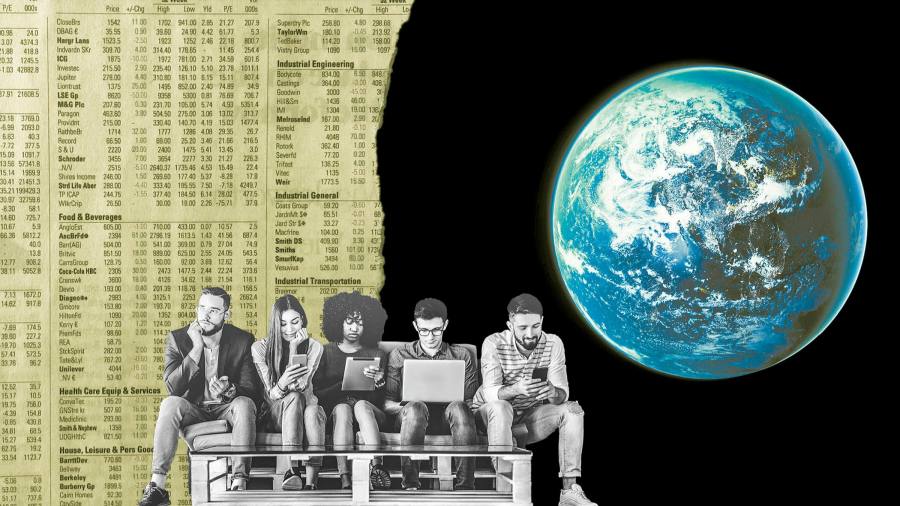 What is up with those weird millennials? That is a sentiment many middle-aged people like me might have muttered in the workplace when confronted with the fact that some of those born between 1981 and 1996 have different attitudes towards careers and hierarchies.

And the incomprehension — or irritation — is often mutual: many millennials are angry about the economic and environmental messes created by older cohorts such as Gen X (1965-80) or boomers (1946-64).

But among the finger pointing, one less noticed aspect to ponder is how generational differences are currently affecting finance. Millennials appear to have some subtly different attitudes towards money from their elders. That distinction could have important implications for finance in the future, even if the system currently sits in the hands of Gen X and boomers.

The issue is highlighted in a survey by Fidelity, the asset manager. The Boston-based group often polls its clients about their philanthropy. But this year it did a comprehensive survey of 4,000 individuals who gave at least $1,000 to charity in the previous year, and dissected the answers by age.

This revealed 35 per cent of boomers in this pool defined themselves as “philanthropists”, as did 48 per cent of the Gen X cohort. But among millennials a whopping 74 per cent used this label. Yes, really.

Less surprisingly, millennials are far more influenced by tech than their elders. They often make philanthropic decisions due to social media campaigns, and use digital platforms for this. More important, millennials also want to blend philanthropy with other financial, consumption and career choices, rather than treating it as a separate silo.

Consequently, 87 per cent of millennials want to work for a company that engages in corporate responsibility. Sixty-five per cent only buy from responsible companies and 43 per cent engage in impact investing. This is far higher than their elders; a measly 12 per cent of boomers partake in impact investing. “Charitable giving is becoming charitable living,” says Pamela Norley, president of Fidelity Charitable, who describes this as “an entirely new mindset”.

One survey alone is not a trend. And Fidelity’s poll only covers people wealthy enough to make donations, a lucky minority in a country where four in 10 adults do not even have $400 in savings.

In some senses, this might seem odd. The millennial generation as a whole faces and feels far higher levels of economic insecurity than before, which has been exacerbated by Covid-19. Classic economic theory thus might suggest that millennials would be even more anxious than their parents to chase wealth maximisation.

And since millennials only possess a small slice of American wealth — some 4.5 per cent, according to the Federal Reserve — it might seem doubly tempting to scoff.

But that could be a mistake. In the coming decades, many trillions of dollars will move between the generations as elders die off. Accenture calculates these flows will be worth $30tn. Others posit even bigger sums — analysts at Cerulli suggest $68tn.

This is likely to exacerbate inequality between millennials who are lucky enough to have wealthy families and those who do not. Guilt may jump, too, along with anxiety about social backlashes. But if wealthy millennials retain their current attitudes, it could accelerate the shift towards value-based investing. It is also likely to accelerate the trend towards using digital platforms to get better oversight of companies, and more transparency.

Savvy wealth managers understand these sums. Hence why the financial industry is scrambling to expand its environmental, social and governance products: sustainability is a crucial marketing pitch if you want to target those future $30tn-plus flows. Which is another reason for some Gen-Xers and boomers to roll their eyes.

However, here is another point to ponder: this attitude shift suggests that millennials have less tunnel vision when talking about “finance”, “politics” and “social issues”. Instead, their sense of the economy is interconnected, not least because they do not treat an issue like the environment as a mere “externality” to an economic model, as it was in the 20th century. Therein lies another reason for generational misunderstanding. And, perhaps, a source of hope.

Over 50% of world’s new cases in a day: India’s record Covid numbers in 5 charts