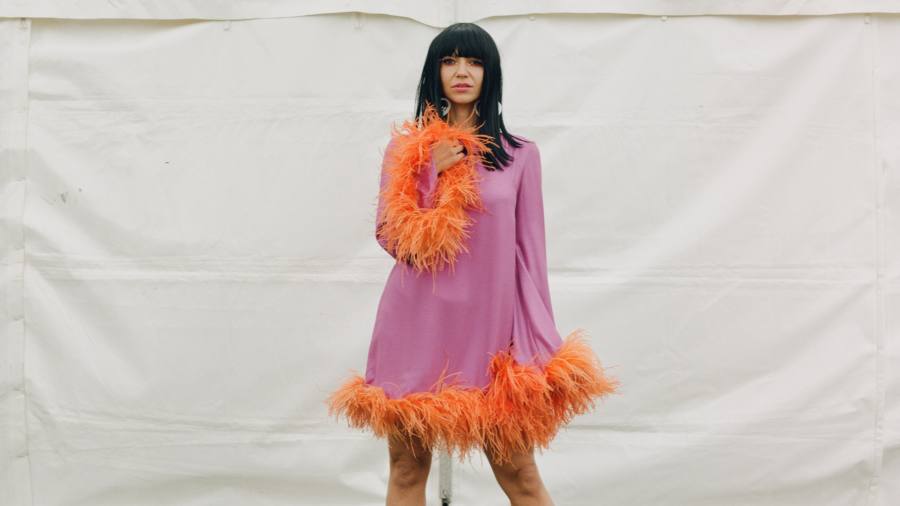 For Khruangbin shows, Laura Leezy might wear a lace catsuit with outsized feathers, or a shocking-pink fringed showgirl outfit complete with headdress, or a neon cocktail dress covered in enormous bows, typically with matching sky-high thigh boots — and always with Cleopatra-style wig. Part-way through, she leaves the stage — only to reappear in an even more elaborate costume.

It’s a style she describes as “pretty-edgy-campy”. Whatever she wears, her audience erupts because Leezy never wears the same stage outfit twice. “I’m always thinking, what are all the things we can do to captivate people?” she says. “My outfit is part of that.”

Leezy’s real name is Laura Lee Ochoa — Laura Leezy is her performance “alter ego” — and she is talking on a Zoom call from her home in upstate New York. Khruangbin has just reached the US leg of a mammoth world tour that started in the summer of 2021 and ends in December. Lee thinks they are about 60 dates in — in stagewear terms, a logistical feat: “I don’t think anyone is having to deal with quite as much shipping and wardrobe as Khruangbin.”

For our call, she is dressed in a low-key shirt from H&M, a gift from a fan, but she is also wearing the Leezy wig. I wonder if I’m talking to Leezy or Lee, because while I can see her face, her heavily fringed wig keeps her just out of sight. Does she ever take it off?

Lee claims she is not as proficient a musician — especially at live jamming — as Speer and Johnson. “It’s nice to have something unique to every single show,” she says. “Some of that can be achieved musically but that’s not going to be me. What I can do is bring a different outfit that’s unique.” She is modest. Her heavy, elastic bass underpins Khruangbin’s sound. Paul McCartney is a fan; according to Mojo magazine, he telephoned her to enthuse about her playing on Khruangbin’s 2021 cover of his track Pretty Boys.

Plenty of pop stars wear elaborate stage costumes — Dua Lipa, Lizzo, Lady Gaga. What makes 35-year-old Lee unique is not only her refusal to wear the same outfit twice, but also her role as Khruangbin’s creative director. And, of course, the disguise — that wig that affords her a life beyond her famous persona.

Lee used her early training in art and architecture to take the lead on the band’s visual identity, not only in clothes, but also staging, choreography and graphic design. All three Khruangbin members have distinctive sartorial style — Johnson favours ponchos and sunglasses; Speer wears suits and, like Lee, a wig. “We’re not like Destiny’s Child, but there’s some cohesion there,” she says.

The band has a wardrobe manager and Lee has a stylist, Megan Boyes, to help her scout for outfits. Nevertheless, Lee’s multiple roles are an extraordinary amount of work, and suggest an obsessive grip on detail in the tradition of Bowie, Kate Bush or Prince. Lee wouldn’t have it any other way. “We’re going to spend the time because it’s our art, and our integrity and that’s how we want it.”

Khruangbin formed over a decade ago and have always been both attention-grabbing and enigmatic. Lee found wigs for their first gig. Few fans would recognise the band in the street without their costumes, which means Lee “gets to experience both sides” — with and without Leezy.

Tolu Coker, an independent British fashion designer who works with Khruangbin, says she sees Leezy as more of an exaggerated version of the artist she knows, rather than a separate character. “Leezy is just an elevated version of Laura — the version with electric energy,” she says. Lee points to another, cultural explanation for her instinct for disguise, one rooted in her Mexican-American heritage.

“In the culture I grew up in there’s this concept called el mal de ojo — the evil eye — where we were always taught not to feed someone’s ego or envy because that’s not a good thing to cultivate. It creates a dynamic that’s unhealthy. So there’s that element to the Leezy that’s on stage . . . I don’t want to go into a restaurant, for example, and have people treat me differently because I’m on stage and I do this thing,” she says.

Her sense of theatre dates back to her mother’s 1980s and 90s hyper-glamorous office wear. Lee grew up in Houston. “My mom was a working woman, nine to five, and she always wore a blazer and matching skirt with big buttons, houndstooth or polka dots, red and pink things.” It instilled in Lee an instinct for professional presentation — and a love of vintage, Margaretha Ley-era Escada: power suits, with shoulder-padded blazers, heels and pencil skirts. “And the patterns — it was all pretty wild at that time.”

Lee came to understand the power of costume change via Elton John and she studied Prince’s visual artistry, too, including Prince’s techniques for choreography and playing guitar at the same time. When Khruangbin play live, Lee bestrides the stage, walking up and down steps and playing bass as she goes. Having to walk around with her heavy bass has forced her to think about costumes in different ways: capes with armholes, the importance of being able to move her legs; the visual impact of an outsized hat. Has she ever fallen over? “I have not — and it’s amazing. I am also very comfortable acknowledging that one day it will probably happen and I will be fine.”

Most of Lee’s stagewear is borrowed from designers, though some she commissions and others she buys for her archive. She has worked with big names in fashion — Philosophy di Lorenzo Serafini made this year’s Glastonbury outfit, Christopher Kane and Mary Katrantzou have dressed her, too. But she leans towards less-celebrated labels.

“If I wear the bigger designers, it tends to date the show because that’s what (she makes air quotes with her fingers) ‘Giant Designer’ was doing that year. But if I wear something independent it feels otherworldly. Younger designers are a little wilder — Bigger bows! Bigger shoulder pads!” Ultimately, she wants to project “a playfulness in rock and roll fashion that doesn’t exist in other places”.

When the world tour ends, Khruangbin will take time off to write music. Leezy will take a rest from her show-stopping ensembles and multiple costume changes. “I’m always in this battle with her,” says Lee. “On the road she takes all the suitcase real estate, and so I’m usually having to wear very basic clothes. And sometimes I feel, it can’t all be about Leezy.”