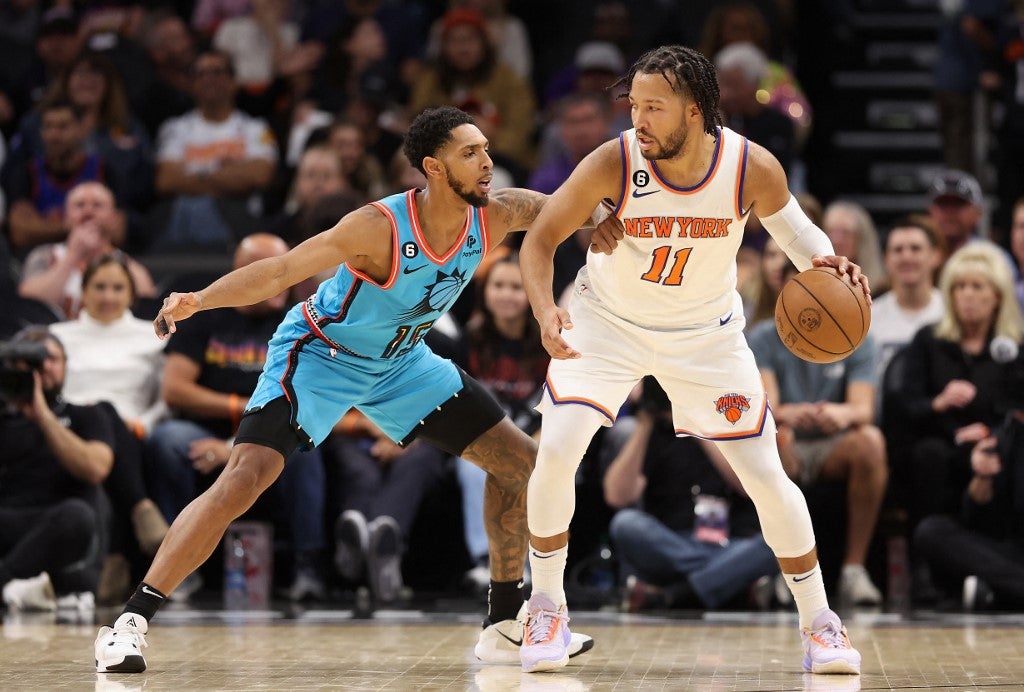 Jalen Brunson #11 of the New York Knicks handles the ball against Cameron Payne #15 of the Phoenix Suns during the second half of the NBA game at Footprint Center on November 20, 2022 in Phoenix, Arizona. The Suns defeated the Knicks 116-95. Christian Petersen/Getty Images/AFP

Cameron Payne scored a team-high 21 points and flirted with a triple-double Sunday afternoon for the Phoenix Suns, who led nearly wire-to-wire in a 116-95 win over the visiting New York Knicks.

Payne, playing in place of injured All-Star point guard Chris Paul, added nine assists and seven rebounds as the Suns improved to 3-3 without Paul, who is sidelined with right heel soreness.

Deandre Ayton (13 points, 11 rebounds) had a double-double and scored the basket that put the Suns ahead for good with 8:28 left in the third quarter. Devin Booker scored 20 points and Damion Lee had 15 points off the bench while starters Torrey Craig (14 points) and Mikal Bridges (13 points) also got into double figures.

Jalen Brunson scored 27 points for the Knicks, who lost their second straight and fell to 2-2 on a five-game Western Conference road trip. RJ Barrett finished with 12 points and Quentin Grimes added 10 points.

This is @campayne‘s fourth career game of 20+ point, 5+ assists and 5+ rebounds, all of which have come with the Suns. pic.twitter.com/j70V2w0eZc

Julius Randle opened the game with a layup to give the Knicks their lone lead, but Payne and Booker combined on an 8-0 run for the Suns, who twice opened up a 10-point lead and led 28-22 at the end of the first.

The Suns led by 11 twice in the second before the Knicks tied the game at 53-53 with a 17-7 run that ended with Randle and Brunson draining back-to-back 3-pointers in the final 1:06. Bridges then hit a floater and Brunson missed a 3-pointer just before the buzzer.

Brunson missed another potential go-ahead 3-pointer to open the third quarter. A layup by Grimes tied the score for the final time at 60-60 with 9:19 left. The Suns missed three shots on their next possession but New York’s Isaiah Hartenstein missed a hook shot, after which Ayton hit the go-ahead layup and Booker dunked following a turnover by Randle.

The Knicks pulled within a basket twice more before Phoenix went on an 8-0 run to lengthen its lead to 75-64. The Suns led 90-75 at the end of the third and removed any doubt when Lee and Payne combined to score all the points in an 11-0 run that put the hosts ahead 105-79 with 6:29 left.