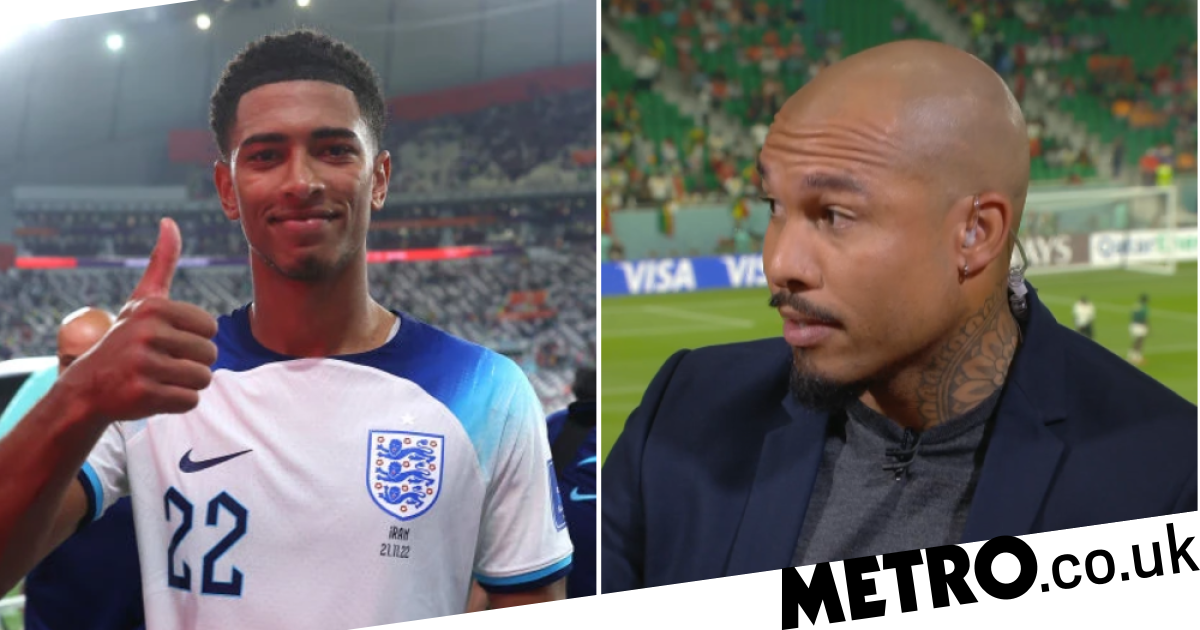 Nigel De Jong has dismissed suggestions that England starlet Jude Bellingham might be wary of moving to the Premier League due to the struggles of Manchester United flop Jadon Sancho.

The 19-year-old gave a composed and authoritative display in the Three Lions’ World Cup opener against Iran on Monday, opening the scoring in a 6-2 win with a brilliant header to underline why he is considered one of the brightest talents in European football.

Liverpool, Real Madrid, Chelsea, United and City are all thought to be chasing Bellingham’s signature ahead of a summer move next year, with Borussia Dortmund resigned to losing the midfielder and ready to cash in for what will likely be a Premier League record fee.

When Gary Neville suggested that Bellingham might want to delay a move after seeing Sancho’s struggles at United – having lost his England place since moving to Old Trafford – both Ian Wright and De Jong interjected.

‘The thing is, being captain there now is a brilliant accolade for him at his age, but, as good as the German league is, I feel that now maybe it’s time to get himself to the Premier League,’ responded Wright on ITV Sport. ‘If that’s what he’s gone there for, to develop and get to a level, I think he’s there.’

De Jong wouldn’t be adverse to seeing Bellingham move to Bayern Munich either but has no doubts he is already in a position to take the Premier League by storm and has ‘a better head on his shoulders’ than Sancho.

‘I think [he’s ready for the Premier League] as well, but I would prefer him to go to Bayern Munich because that’s the extra step in the development of a player, structure-wise but also playing for the big prizes,’ explained De Jong.

‘I don’t want to disrespect Dortmund in that sense, but as an organisation Bayern is the pinnacle when it comes down to it.’

‘If I’m really honest with you and I look at the personality Jude Bellingham has already at 18 or 19 years old, he has by far a better head on his shoulders [than Sancho].

‘When it comes down to the humility that he has but also the cleverness and intelligence that he has, knowing what it takes in order to be the best midfielder in the world.

Wright chimed in: ‘Saka’s going to be hot as well!’

The Arsenal legend also had a word for Marcus Rashford, who netted off the bench against Iran, saying: ‘Delighted for him, and you’re delighted for all of them [the subs] because it’s an opportunity.

‘Far too much space for him but it’s the composure and the calmness of him to slot that home. That’s what it comes down to. If he misses this, people say, “Oh he should have scored, it would have given him confidence” but he’s scored now and I’m just so happy for him.’

Glenn Maxwell Reveals Painful, Gruesome Details of How he Broke His Leg

Find My misfire leads to SWAT raid on grandmother

NY Times to meet with journalists after union threatens to…