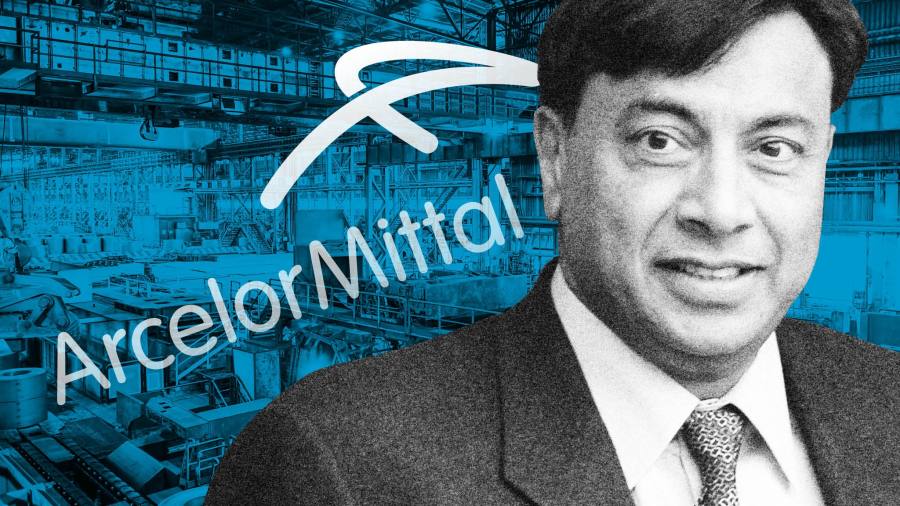 For more than a decade Lakshmi Mittal was the undisputed king of steel, reigning over an empire of furnaces and factories that dwarfed its nearest rival.

That crown no longer belongs to him since ArcelorMittal’s title as the world’s largest producer of the commodity was taken by a Chinese competitor.

But despite losing that prestigious position, the €22bn-valued metal and mining group has emerged from the Covid-19 pandemic in leaner shape. As many other corporations loaded up on debt in order to survive the crisis, ArcelorMittal has done the opposite.

Its 70-year-old chief executive and chairman says his focus is on expansion in emerging economies and repaying the faith of investors with an expected reinstatement of dividends, as well as playing a leading role in the transition to low-carbon steelmaking.

Like other companies in the volatile steel industry, ArcelorMittal has endured a rollercoaster ride over the past five years with downturns punctuated by fleeting highs.

Following a global price collapse sparked by Chinese overproduction, US president Donald Trump’s heavy tariffs on foreign metal catapulted the sector into the middle of a trade war and it was sputtering even before the fallout of coronavirus.

During this period, the Luxembourg-based ArcelorMittal has twice resorted to cash calls totalling $5bn. The most recent was in the first wave of the pandemic, when it raised $2bn in convertible bonds and equity after suspending dividends.

The defensive actions allowed management to speed up a plan to reduce net borrowings to $7bn, the lowest level since Mittal Steel’s €27bn blockbuster takeover of European champion Arcelor in 2006.

With that milestone reached and the balance sheet fortified, Mr Mittal, whose family controls a stake of 37 per cent, said he was confident the board would reinstate cash payouts in February.

While analysts have forecast a 30 per cent drop in free cash flow to $1.74bn in 2020, according to data from S&P Capital IQ, they have also pencilled in a narrowing of annual net losses to $1.82bn.

“Compared to other steel companies, investors still feel very positive about ArcelorMittal,” said Ingo Schachel, head of equity research at Commerzbank. “It should be well-positioned to benefit strongly and quickly from the improvement of steel market fundamentals in Q4.”

Indeed, the Amsterdam-quoted stock has tripled to €20 since it hit lows in March, outperforming peers including Nippon Steel, Nucor of the US and Baoshan Iron & Steel of China, whose parent company Baowu recently took the top spot in the steelmaker rankings.

At least some of the rally is down to a steel market firing on all cylinders after a sharp shock to demand in many regions early on in the outbreak.

A proxy for profitability known as spreads, which measure the difference between steel selling prices and raw material costs, have widened in the US, Europe and China over the past consecutive six months, according to S&P Platts Global.

As it hunts for growth in the longer run, the centre of gravity in ArcelorMittal’s business is tilting from established western markets towards developing regions, where demand for the industrial metal is expected to increase with rising living standards.

In a homecoming of sorts for its billionaire chief executive following previous false starts, ArcelorMittal finally entered India in 2019 with the $5.7bn purchase of bankrupt Essar Steel through a 60/40 joint venture with Nippon Steel.

Other big investments have taken place in Brazil and Mexico, while a project is under way to triple its iron ore production in Liberia.

“Are we leaving the developed world? The answer is no. Are we growing in the developing world? Our answer is yes,” Mr Mittal said.

“In the developed world, obviously the markets are not growing and after Covid I do not see they will grow [or] come back to pre-Covid before 2023 or 2022. But in India, the market growth is there, in Brazil demand is improving [and] in Mexico the market is growing.”

Although ArcelorMittal is not completely exiting from North America, the shift in geographic focus was underscored by the company’s disposal of the bulk of its US operations for $1.4bn to Cleveland-Cliffs, in a cash-and-shares transaction announced in September. Most of the $505m received by the seller was spent on share buybacks.

Only a year before, the company sold a batch of European plants to Liberty House on the orders of Brussels competition regulators as a condition for its own takeover of the continent’s biggest steelworks in Italy.

What in effect amounted to an asset swap has not gone according to plan, however. The Ilva business, which was previously nationalised after being declared an environmental disaster, has been dogged by political and labour wranglings and failed to meet profit targets, leading ArcelorMittal to agree to offload a majority stake to the Italian state.

But despite long-running troubles in Europe’s steel sector, Mr Mittal stressed his company’s commitment to the continent, which hosts some of the most advanced initiatives to decarbonise production of the metal, a big source of greenhouse gases.

As the EU pursues a target of carbon neutrality by 2050, ArcelorMittal’s green efforts in the region include projects to replace coal with hydrogen and the development of carbon capture and storage systems.

While the bloc is designing a green border tax to ensure companies in the bloc are not undermined by imports from rivals in regions with a more relaxed approach to reducing emissions, the tycoon warned policymakers that Europe must remain competitive.

“The European Commission has to decide that they want to continue to have industrial champions, whether they want to have the steel industry and the manufacturing industry strong.”

Trump impeachment: View: Will US go the whole hog with Trump’s second impeachment?

All 3 members of poll panel for Supreme Court bar…