OnePlus 11 Pro: Early rumors and what we want to see 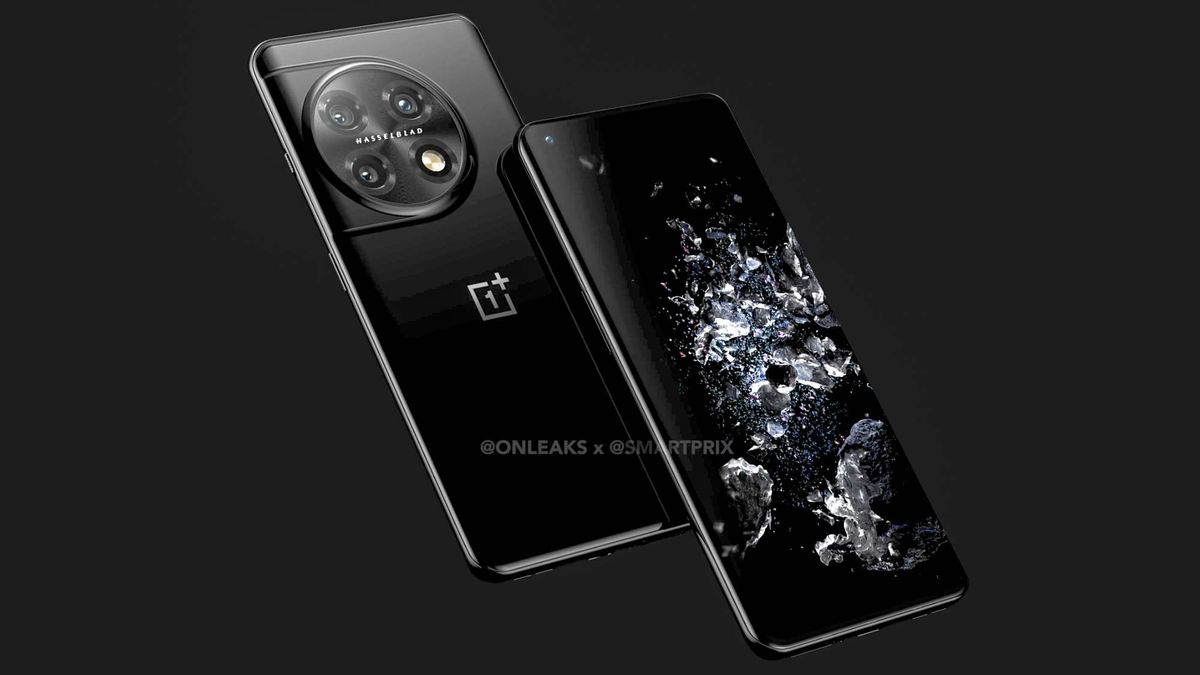 Whispers of the OnePlus 11 Pro have started to appear, and we’re already looking forward to it as one of the first big smartphones of 2023.

The OnePlus 10 Pro, and also the OnePlus 10T, proved to be excellent when we reviewed them earlier this year. But the competition has evolved since then, so we’re ready to see what OnePlus will do to upgrade its flagship Pro model. So far, that’s looking like a new design, and a new, more powerful chipset.

Below, we take a look at the OnePlus 11 Pro rumors as they stand, plus we make a few polite requests for features that OnePlus could do with implementing to make the 11 Pro as capable as possible.

We’ll be seeing the OnePlus 11 Pro before the end of the year according to Digital Chat Station. Keep in mind though that there was a gap of several months between the OnePlus 10 Pro’s Chinese release and the global release. We may see this happen again, meaning the OnePlus 11 Pro won’t be on offer for U.S. or U.K. customers until later in Spring 2023.

Even at $899, OnePlus would still undercut equivalently luxurious and fully-featured phones like the Galaxy S22 Plus, Galaxy S22 Ultra and iPhone 14 Pro. We’d still expect the upcoming Pixel 7 Pro to match it though, since the Pixel 6 Pro sells for $899.

Unlike 2022, there may be a base model OnePlus 11, according to leaker Yogesh Brar. However, similar to how the iPhone 14 changed little from the iPhone 13, the standard OnePlus 11 won’t be that much different from the OnePlus 10 Pro and OnePlus 10T.

On the front, we’d imagine the OnePlus 11 Pro will look a lot like the OnePlus 10 Pro with curved display edges and a left corner punch-hole camera. The OnePlus 10T had a flat display with a centered punch-hole, which seems to have been a T-series change only, going by new renders based on leaks from OnLeaks, published by SmartPrix.

As we can see in the renders, the big change here from the OnePlus 10 Pro and 10T is the camera bump. The squared-off block has now turned circular, with two lines extending off of the main round body to join the side rail. It’s yet another new design for OnePlus, but it looks good at least.

According to these renders, OnePlus’ trademark alert slider should be returning for the 11 Pro. While the OnePlus 10T was the first flagship OnePlus without the slider, OnePlus’ statements from the time seemed to imply this wouldn’t be a permanent decision going forward. Perhaps we’ll see other OnePlus phones ditch the slider in future, but we expect (and hope) it’ll appear on the 11 Pro.

As for the screen, we will likely see another 6.7-inch LTPO display with QHD resolution on the 11 Pro, just like OnePlus has used on the last few generations of flagship phone. That should again put it in a good position to be one of the most fully featured screens on a smartphone available, alongside the Galaxy S22 Ultra and iPhone 14 Pro Max. Recently leaked specs for the OnePlus 11 Pro have potentially confirmed that the new phone will keep the QHD 6.7-inch screen.

Overall, according to leaker Assen on Weibo, the Pro model this year will be much more impressive than the OnePlus 10 Pro because it’ll share a lot with the upcoming Oppo Find X6 Pro Plus. (What a mouthful.) The Oppo Find X series is the sister series to OnePlus’ main numbered phones, and it’s produced some great devices, like the Oppo Find X5 Pro. We don’t know what a Pro Plus variant would entail over just a Pro model, but it sounds quite intriguing at least.

As a Pro-designated model, we imagine OnePlus will be bringing back its Hasselblad-tuned cameras for the 11 Pro. OnePlus signed up for a few more years of partnership with the Swedish camera maker, and while there was no Hasselblad camera on the OnePlus 10T, this was only because OnePlus apparently didn’t consider this a photography-focused phone. So expect to see the partnership alive and well on the 11 Pro.

In hardware terms, we are expecting triple rear cameras, with 48MP main, 50MP ultrawide and 10MP 3.3x optical telephoto cameras, plus a 32MP selfie camera on the front. We can see three lenses on the OnLeaks/SmartPrix renders too, which makes this feel even more likely.

Unfortunately, it seems that the cameras may not meet our expectations. Recently leaked specs hint at a 50MP main camera, a 48MP ultrawide lens and a 32MP telephoto with a 2x zoom with a 16MP selfie camera. This change could impact the camera’s overall performance — especially the reduced zoom capabilities.

Like with the OnePlus 10 Pro, we see no sign of a miscellaneous fourth rear sensor, which is good since those didn’t impress us much on older OnePlus handsets. The OnePlus 8 Pro had a photochrom mode camera that could take photos with a strange (sometimes X-ray) filter applied, while the 9 Pro offered a dedicated monochrome camera for black-and-white shots.

As a flagship phone, the OnePlus 11 Pro won’t be lacking in power, whatever chip it ends up with. And that chip, according to leaker Digital Chat Station will be a Snapdragon 8 Gen 2, the follow-up to the Snapdragon 8 Gen 1 and 8 Plus Gen 1 that we’ve seen in various Android flagship phones this year. Subsequent leaks have supported this theory. If the phone does launch before year’s end, OnePlus will be able to take the title of “most powerful” for at least a couple of months without any meaningful competition from other Android phones (although the iPhone 14 Pro will likely outperform it as previous iPhones have).

OnePlus will likely pair this chip with 8GB or 12GB (or even 16GB) RAM and 128GB and 256GB storage options, as it has for the past several generations of its flagships. Recently leaks have supported this guess, with the current specs hinting at a 16GB model for the OnePlus 11 Pro.

OnePlus always prioritizes charging speed on its phones, and so it feels like a given that the 11 Pro will come with an absurdly powerful charging brick in the box. The only question is how powerful.

The OnePlus 10 Pro came with an 80W charger, or a 65W one in the U.S, while the OnePlus 10T shipped with a 150W charger. Despite these historical trends, the OnePlus 11 Pro looks set to change things up again. The most recent leaked specs suggest a 100W fast charger, which would represent a step up for the OnePlus flagship model.

Battery life on the OnePlus 10 Pro was excellent, with it lasting 11 hours and 52 minutes at 120Hz on the Tom’s Guide custom battery test. The 10T, with its slightly smaller battery and less advanced display, managed 10 hours and 59 minutes, which is still a good score but not class-leading. Hopefully the 11 Pro follows in the 10 Pro’s footsteps, but either way we should be getting one of the best Android flagship phones for battery longevity.

OnePlus 11 Pro: What we want to see

There are still a lot of gaps in the rumors for the OnePlus 11 Pro so far. However there are some things that we hope OnePlus will change (or at least keep the same) for its next flagship.

OnePlus was so very close to being one of the best camera phones last year with its second-gen Hasselblad for Mobile photography. We’d love for the third time to be the charm for OnePlus, but it’s going to take more than just software enhancements to make the 11 Pro truly competitive with great camera phones like the Galaxy S22 series or Google Pixel 6 series.

One of the biggest hindrances right now is its telephoto camera. Not only is 3.3x zoom a little low for a flagship Android phone, its 8MP sensor is also far smaller and grainier than any rivals. This, and perhaps a larger and higher-resolution main camera also, would give us a lot more confidence in the OnePlus 11 Pro’s photography right off the bat.

OnePlus has shied away from the official dust/water resistance ratings that most other flagship phones boast. OnePlus phones do come with a promise of being splashproof, but that’s not enough for proper peace of mind.

OnePlus gave the 10 Pro three guaranteed years of Android updates, which is an acceptable number. However, with Samsung offering four years for its phones (5 years of security patches), another year or two of support would give additional value for money to a brand already known for lower-than-average pricing.

A less critical change to OnePlus’ plans would be to introduce a base model alongside the 11 Pro, as it did with the OnePlus 9 and OnePlus 9 Pro in 2021. While the busiest area of the smartphone market is around the $1,000 mark, there are great phones to be had cheaper than that, like the Google Pixel 6 or the Galaxy S22. OnePlus should attempt to compete here again, and offer users another well-designed flagship alternative.

Pictures shows amazing examples of trees growing over other objects