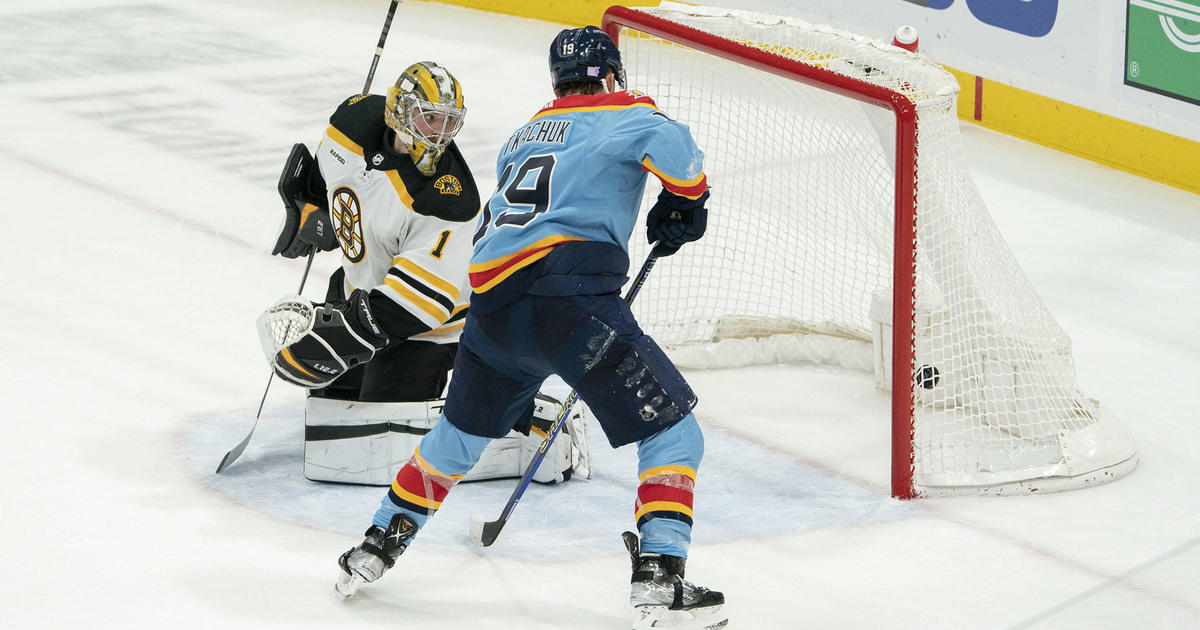 The Panthers took advantage of seven power-play chances by scoring three goals with the man-advantage, including two in the second period.

Sam Reinhart and Aaron Ekblad also scored for Florida. Spencer Knight, who spent two seasons at Boston College before joining the Panthers in 2021, made 37 saves in the win.

Boston got goals from Charlie McAvoy and David Pastrnak. Jeremy Swayman made 24 saves.

Florida came into the game leading the NHL in total shots on goal and had been outshot in just three games before Boston took 15 shots on Knight in the opening period and ended the frame with a 39-29 advantage.

The Panthers took the lead on a power play goal from Reinhart 1:49 into the game on a give-and-go from Tkachuk.

Boston evened the score on McAvoy’s slap shot with a two-man power play advantage with 2:46 remaining in the first.

Florida ended up killing a four-minute penalty on Lundell at the start of the second – with Lundell giving his team the lead for good with his second goal of the season at 4:41 in the period.

The Panthers then added two more goals in the final four-plus minutes of the second to take a 4-1 lead into the third.

Boston had a second 5-on-3 advantage in the third and again cashed in with a slap shot from the slot – this one coming from Pastrnak.

The Panthers, again, killed the remainder of the penalty and limited the damage.

With 3:54 remaining, Charlie Coyle scored, but the goal was immediately waved off due to Nick Foligno playing the puck with his hand.

With 2:10 left, Ekblad scored into the empty net.

This was the second seven-game winning streak of the season for Boston, with the first lasting from Oct. 20-Nov. 3; the second started Nov. 7 against Buffalo.

Florida entered on a three-game winless streak, with losses in four of its previous five games.

NOTES: The Florida Panthers started last season with 11 consecutive home wins, tying the NHL record set by the Chicago Blackhawks in 1963. Boston, which returns home to face Carolina on Friday, has a chance to set the record as it has won its first 11 at home this season. Florida lost its bid to set the record last December when it lost in Sunrise to the expansion Seattle Kraken. … Boston forward Craig Smith played in his 800th NHL game on Wednesday night. Ekblad recorded his 100th NHL goal. … Florida was charged with two, four-minute high-sticking calls: Lundell in the second and Eetu Luostarinen in the third. Both came during Boston power plays, giving the Bruins a 5-on-3 advantage.

Denial of responsibility! Pedfire is an automatic aggregator of the all world’s media. In each content, the hyperlink to the primary source is specified. All trademarks belong to their rightful owners, all materials to their authors. If you are the owner of the content and do not want us to publish your materials, please contact us by email – [email protected]. The content will be deleted within 24 hours.
boston bruins
0
Share

The most common passwords that will not protect you