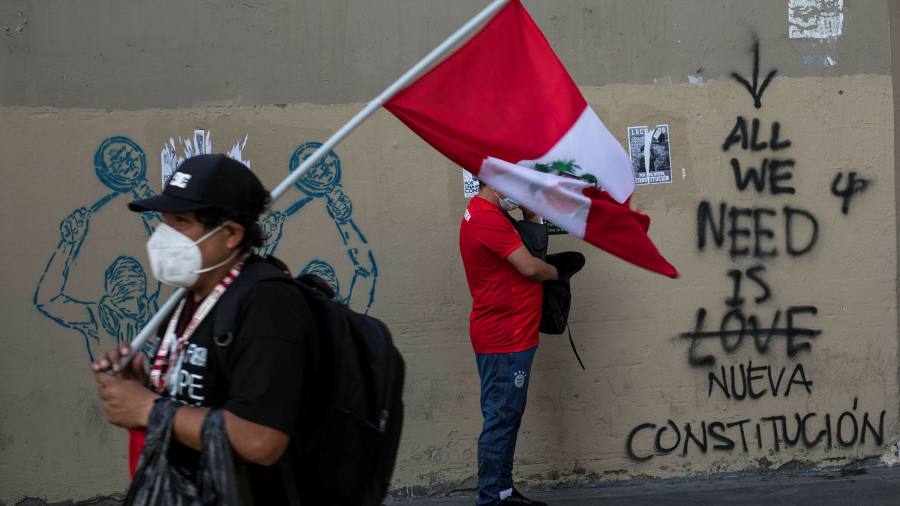 Peru has joined an elite group of countries issuing debt that matures in 100 years, as investors looked past the acute political crisis that has engulfed the country in recent weeks.

The South American nation on Monday launched the sale of $1bn of century bonds, said a person familiar with the matter, in addition to $2bn of notes set to mature in 2060 and another $1bn of 12-year bonds.

The sale comes after one of the most turbulent fortnights in Peru’s political history.

The country has had three presidents in that time: Martín Vizcarra was forced to quit after being impeached by congress and Manuel Merino, who stepped up from being head of congress, lasted just five days before huge street protests forced him to step aside.

Francisco Sagasti, a 76-year-old former World Bank official, has since been sworn in as the country’s interim leader with a mandate to guide it through to fresh elections due in the second quarter of 2021.

“The political backdrop is challenging,” said Alberto Ramos, chief economist for Latin America at Goldman Sachs. “On the other hand, we are living in a world with abundant liquidity.”

“We think that Peru is a solid investment-grade credit despite the political volatility,” said Shamaila Khan, head of emerging market debt strategies at AllianceBernstein. “The country has a strong external position and low level of indebtedness.”

Austria, Mexico and Argentina are among other countries to have issued century bonds in the past, with Buenos Aires forced to restructure its debts earlier this year.

Peru has been one of Latin America’s fastest-growing economies this century. Its GDP has more than quadrupled since 2000, spurred by Chinese demand for its copper. The mini-boom, helped by the successful quashing of a Marxist insurgency in the 1990s, lifted millions out of poverty and greatly expanded the middle class.

But the coronavirus pandemic cruelly exposed the deficiencies of Peru’s economic model, reminding Peruvians that too many citizens had been left behind, unable to access opportunities reserved for the more privileged in society.

The recent political turmoil has weighed heavily on the country’s assets. The price of a dollar bond set to mature in 2050 has slipped from 163 cents on the dollar at the start of the month to 158 cents. Its currency, the sol, has also suffered, hovering near a record low last week before strengthening slightly.

Despite the chaos, Peru was able to price the century bond at 1.70 percentage points above US Treasuries, said the person familiar with the sale. The benchmark 10-year US Treasury bond currently yields 0.85 per cent.

Mr Ramos warned a continuation of the political volatility could prove costly for investors. “It generates volatility in asset prices and adds uncertainty to the outlook,” he said. “It could eventually down the road compromise what are now relatively solid fundamentals.”

What You Need to Know About Linoleic Acid and Your Skin

Lizzo called Beyoncé her ‘North Star’ during her…