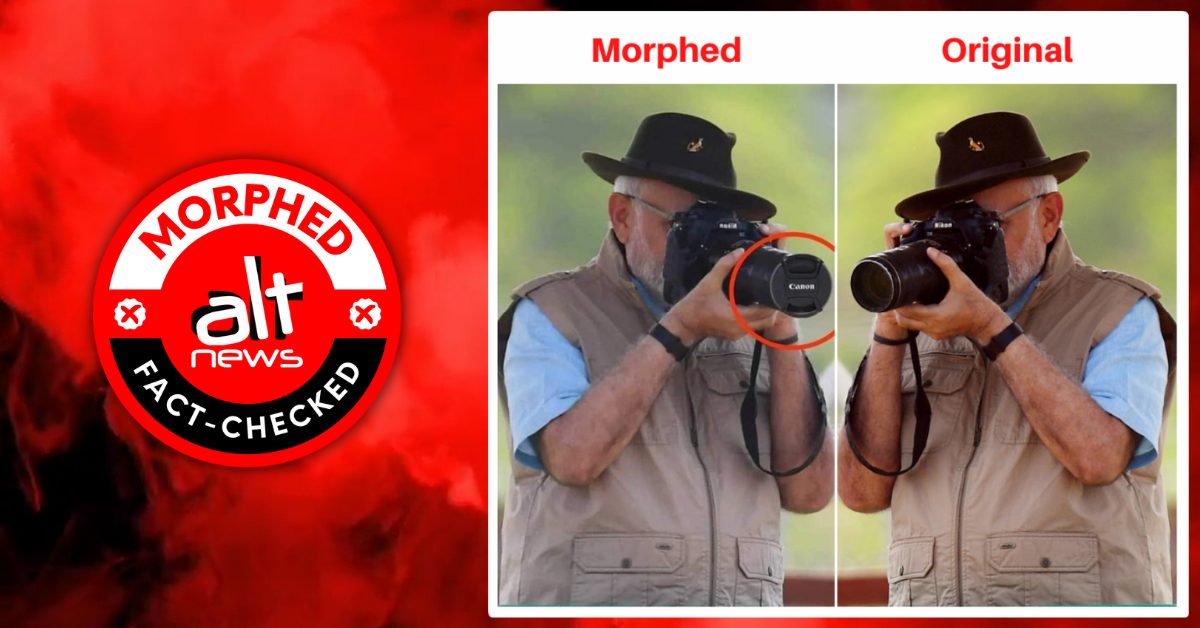 Prime Minister Narendra Modi on September 17 released wild cheetahs brought from Namibia at the Kuno National Park in Madhya Pradesh. Following this, the prime minister was also seen taking photos with a camera. Images of him holding the camera flooded the news and social media. In one of them, he is seen holding the camera with the lens cover on. It is being claimed that Prime Minister Modi was clicking photos without removing the lens cap. Social media users have been sharing the photos while trolling the PM.

Congress leader and MLA Virendra Chaudhary tweeted this picture and wrote, “Who takes a photo like this (with the lens cap on)?”. (Archived link)

Trinamool Congress Rajya Sabha member Jawhar Sircar also tweeted this image of PM Modi and wrote, “Keeping the lid on statistics is one thing, but keeping the cover on the camera lens is sheer farsightedness.” (Archived link)

At first glance, this picture appears to be edited, since the angle at which the camera is pointed is different from that of the position of the lens cap. Another noteworthy detail is that this image has been flipped, so the branding of the camera appears to be flipped. Finally, though there is a Nikon camera in the picture, the lens cap is from the brand Canon.

Next, Alt News examined the Government of India website PmIndia(dot)gov(dot)in to investigate whether the image was authentic. This portal contains the latest and updated photos of the prime minister. Here, we found an image gallery on Narendra Modi releasing the cheetahs at the Kuno National Park. We then found the original image. It can be clearly seen that there is no cover on the camera lens in the original version. The image was edited to add the lens cap, and the image has been flipped as well.

To make these differences easier to see, we have included a side-by-side comparison of the morphed photo and the original version.

To sum it up, many Opposition leaders falsely shared an edited picture of PM Modi taking a photo with a camera with the lens cap on. The photo was morphed.