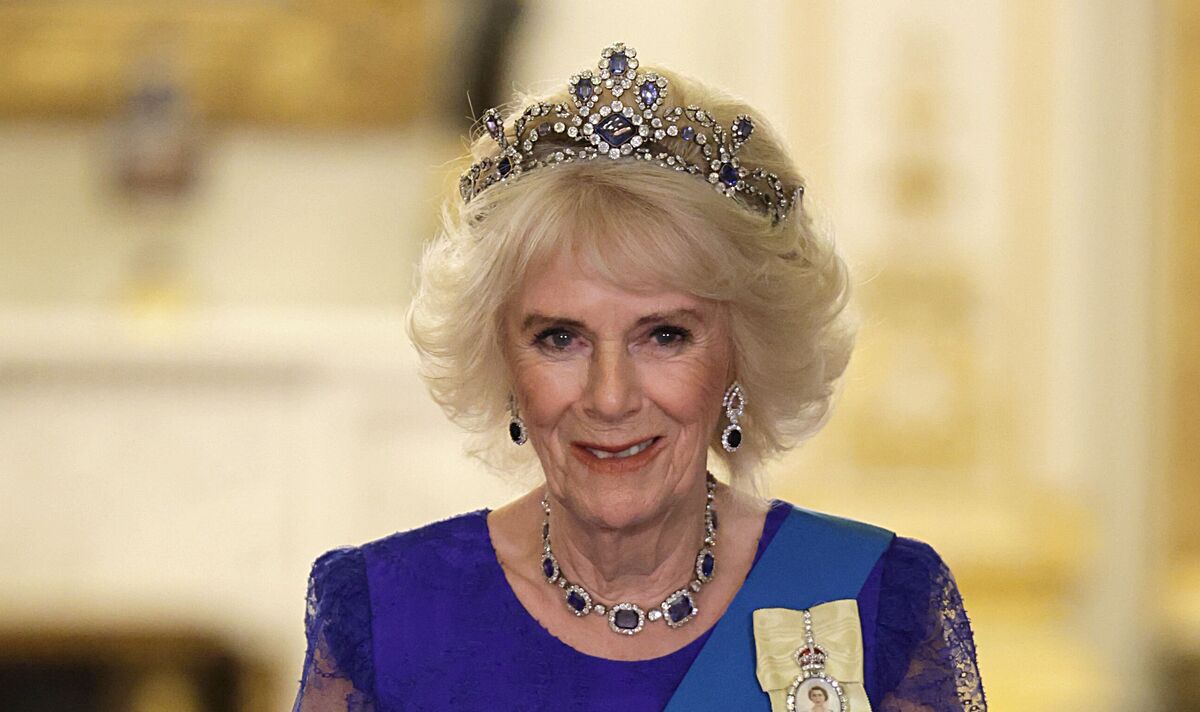 Queen Consort Camilla joined her husband, King Charles in welcoming the President of South Africa, Cyril Ramaphosa, to the UK. This evening, the monarchs held a state banquet and Camilla looked elegant in a blue ballgown and tiara.

Queen Camilla’s dress is by Bruce Oldfield and it is an item she has had in her wardrobe for a few years. It is the same dress she wore when she hosted a Commonwealth leaders’ dinner in Rwanda with King Charles in June earlier this year. She re-wore the gown once again for her Vogue which was held ahead of her 75th birthday.

In terms of jewellery, Camilla chose to honour the late Queen Elizabeth by wearing her Belgium Sapphire Tiara and the George VI Sapphire earrings and necklace.

She donned a royal blue sash as well as the Royal Family Order, made up of a portrait of the Queen on a yellow ribbon.

The sapphires were aquired in stages by Queen Elizabeth; the necklace and earrings were a wedding gift from her beloved father, King George VI, in November 1947. The jewels were antique, dating to the Victorian era.

Later, Queen Elizabeth acquired a diamond and sapphire necklace, formerly the property of a Belgian princess, to add to the set.

The necklace was set on a tiara frame in the early 1960s making the suite into a more complete parure. She also had the necklace altered slightly, and she had a bracelet comissioned to complete the set.

The King George VI Victorian suite and the Belgian sapphire tiars the third and fourth most expensive pieces of sapphire jewellery in the Royal Family, both estimated to be worth £5million each according to jewellery experts at Steven Stone.

The experts took a closer look at the original necklace and said it features 18 sapphires, sat on a gradient, ranging from 8 to 30cts, before it was redesigned in 1952.

These huge sapphires are surrounded by a halo of diamonds, and linked together by additional single stone diamonds, which are between 0.8ct and 1.5ct.

When Queen Elizabeth altered the necklace, she removed four of the sapphire clusters from the back and remodelled and reset one of larger stones from the front, to create a beautiful pendant for the necklace which Camilla chose not to wear this evening.

Royal fans commented on Camilla’s outfit and praised her for re-wearing an old dress.

Isabelq42 said: “Credit to her for wearing a dress seen before. She understood the assignment in this case. Plus she had worn something new earlier in the day.” Thedonn884 added: “Love this colour on Camilla- and love she went for a new tiara for this look.”

Someone with the username babygoatx__ suggested: “Now Camilla understood the assignment! She repeated a dress which is a good look optics wise due to the crisis, but she also wowed with wearing something she’s never worn before! The blue looks great with the dress and she looks good! While I will say the dress is definitely not my favorite, she pulls it off!”

Birdnerd327 remarked: “At least someone got to play in the jewelry vault!! she looks lovely in the blue dress and the sapphire tiara/ baubles compliments it nicely.” Pientonnaer said: “I did not expect her to wear this tiara but she totally pulled it off!”

Mindfulness lessons should be part of national curriculum, experts say