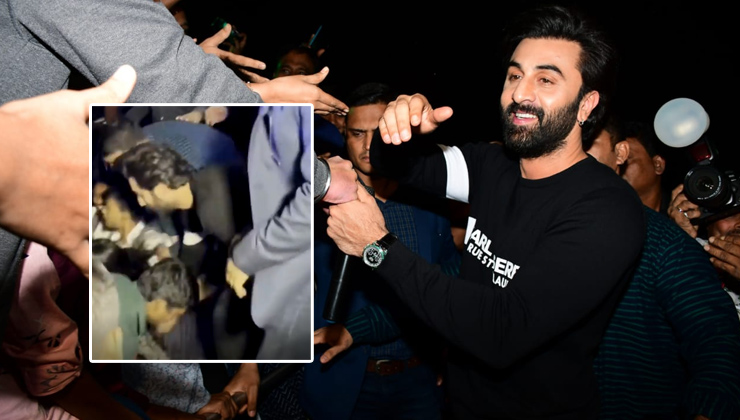 Actor Ranbir Kapoor recently spotted an event today in the city and thousands of people were seen flocking to the venue just to get a glimpse of the actor. However, amidst the crowd, an unfortunate incident happened where Ranbir had to intervene and his gesture towards the concerned fans just won the internet.

We recently came across a video where we get to see Ranbir greeting his fans; however, they lose their control and fall off the barricade. Seeing a bunch of people falling down, Ranbir quickly extended a helping hand as he tried to pull them up. This sweet gesture impressed the fans.

The Shamshera actor is still promoting his recently released film, Brahmastra. Ahead of the movie’s release, there was a lot of criticism. Even after the release of the movie, the makers and actors were criticized on social media. During an exclusive interview with Bollywood Bubble, Kapoor discussed about the manufactured negativity around the film that happened pre and post release.

The Brahmastra actor spoke about the support that films need from the media. He stressed the fact of how the media should present facts. Ranbir Kapoor told Bollywood Bubble, “I think, content has to be great. That’s always key. But we are in a time in the world right now, there are so many voices. You know, if it’s social media, if it’s voiced, it’s so many opinions, critics, trade pandits, you know, all of that. But movies also need a lot of support. We need support especially from people, from the media. You know, they are in the place of so much of power.”

On the professional front, Ranbir Kapoor will be next seen in Animal with Rashmika Mandanna. The movie is helmed by Sandeep Reddy Vanga. He also has an untitled film with Luv Ranjan, also starring Shraddha Kapoor.