Recycling Beauty, Prada Foundation — what the Romans did for us and what we did to them 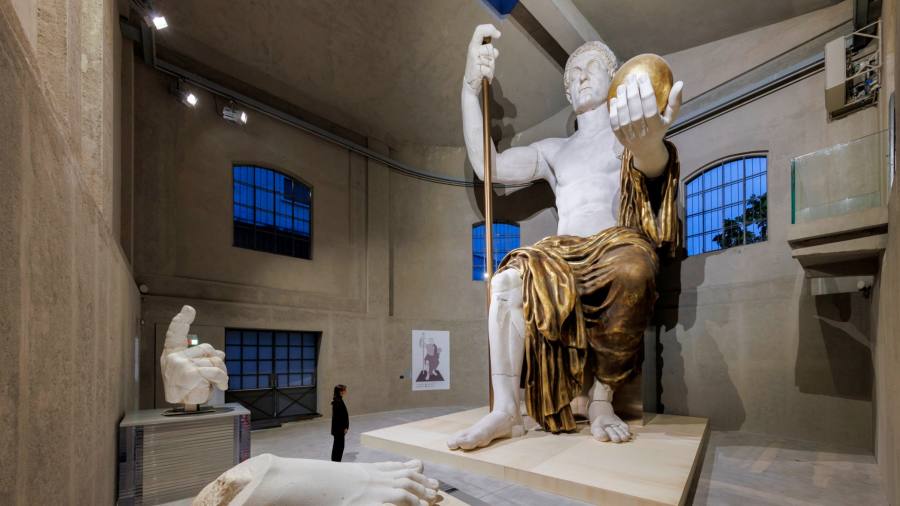 In the handsome surrounds of the main gallery of Milan’s Prada Foundation, a classical Greek funerary stele of a naked athlete and his young servant makes a conspicuous impression. Not for the beauty of the sculptural work, which is notable: the athlete powerful and contemplative, the servant handing him a small ointment vase, respect and fear delicately etched on his face.

More striking than those qualities is the fact that the work has clearly been divided into two parts. The lighter hue of the upper two-thirds of the piece, compared with the darker lower section of legs and feet, shows that the two parts have been treated quite differently during the 2,500 years that have passed since their creation. Research shows that the complete work was sawn in two in the 17th century. The smaller part was pressed into service as a tomb lid, while the larger section, turned upside down, was redeployed to cover, of all things, a sewer.

Recycling Beauty is an elegant and profound exhibition that investigates the way in which pieces of art have been repurposed over turbulent centuries. It is full of witty contradictions, none more hubristic than the fate of the good-looking athlete, his beauty buried in the cause of brutal practicality.

A few metres away, we find the journey from artwork to lavatorial implement reversed, in a round-backed, red marble seat with a tell-tale hole in its centre. The latrine dates from the age of Hadrian, but was evidently regarded as something more important in the medieval era, when it was used as a throne in papal coronations.

Here is a show that testifies, perhaps more effectively than any display of contemporary work can, to the slippery nature of art’s meaning. By its exclusive use of classical works, tracing their fluctuating fortunes over such long periods of time, it does the very opposite of what most museums intend. Instead of asking us to celebrate their unique and eternal characteristics, it announces that they have no fixed meanings at all. Veneration is replaced by de-fetishisation. Art is what you make of it; art is what you make from it.

The undisputed star of the show resides in the Cisterna, the largest space in the foundation, in which a replica of the colossal fourth-century statue of the emperor Constantine has been created. The statue is best known from the display, in a courtyard of Rome’s Capitoline Museum, of its head, foot and upward-pointing index finger, which has graced many a tourist’s photograph.

The finger and foot have travelled to Milan and are set alongside the 11-metre-high replica, which has been made in collaboration with the museum and the Factum Foundation. The point here is not so much the making of the replica — though it is a frankly unmissable spectacle — but the accompanying research, which shows that the original was itself a reworking of an earlier cult statue, probably of Jupiter. Even the grandest project can be shown to have turned into something quite different from that envisioned by its original plans.

Recycling Beauty has been designed by the Dutch architect Rem Koolhaas, who was also responsible for the conversion of this former distillery into one of the most audacious spaces of the art world. The show is full of Koolhaas’s idiosyncratic touches: the works, which include loans from the world’s leading museums, are shown on low-rise acrylic plinths, similar to those used to transport them. “They are almost better protected than politicians,” he joked at the exhibition’s opening.

Another innovation is the study cubicles, in which smaller works are placed on desks, to be scrutinised by viewers sitting alone. “We made a serious effort to eliminate all the prophylactic measures that typically surround art,” says Koolhaas. “You go to many museums and they are in semi-darkness, and the art is protected by glass. What we wanted was to create a more intimate and direct experience.”

Co-curator Salvatore Settis says the aim was to create in the exhibition a sense of “wonderment, but also attention to detail”. He adds that the foundation’s co-founder, fashion magnate Miuccia Prada, wanted to show classical art in a contemporary context, but had rejected the often used solution of setting classical and contemporary side by side as “too easy”.

Its intellectual underpinnings aside, the show is straightforwardly beautiful in its own right. Witness the sculpture dominating the main gallery, of a lion tearing viciously into the flesh of a horse, a fourth-century BC masterpiece made from Pentelic marble and said to be part of a statuary group depicting one of Alexander the Great’s hunts. It was transferred to Rome at an unknown date, its meaning and purpose transformed into an allegory championing the civic virtues of Roman government and advertising its willingness to defend itself against outsiders. It is, whatever its intention, a remarkably powerful piece.

More surprises: a marble slab with a Roman inscription from the third century recalls in prosaic fashion the financing of a road-paving project by two Roman emperors. Little of interest here — but look at the other side of the slab and there is a gorgeous 13th-century Cosmatesque floor panel, with elaborate marble inlay, in remarkable condition, putting its flipside to shame. The panel would have been constructed from tesserae of fine marbles, obtained by shattering other less fortunate Roman slabs. Destruction and coincidental conservation run hand in hand in this homage to reconstitution.

If temporal dislocation is a principal theme of the exhibition, so are the spatial journeys taken by some of the objects. The Farnese Cup, second-first century BC, the largest extant antique hardstone cameo, is included for its remarkable travels: from Egypt, where it has been linked to the court of Cleopatra I, to Rome and then Constantinople, and then again to the collection of Frederick II in Sicily, until the mid-13th century. Then it is reproduced, c1430, in a drawing by a Persian illustrator, making it possible that it travelled as far east as Samarkand, before returning to Italy where it flitted again between Naples, Florence, Rome and Palermo, each of its trips imbued with political significance of varying degrees. Today it is on loan from the Archaeological Museum of Naples.

Koolhaas compares this example of cultural proto-globalisation to some of the stringent conditions applied to the travel of artworks in today’s climate, which he describes as a “corset of good intentions” that inhibits the fostering of good international relations. “What [this exhibition] allows us to do is play with antiquity, in a subversive way, without politically correct pressures,” he says, “and lets us take liberties with art again. And every piece demands attention.”

The punk philanthropy of Libbie Mugrabi