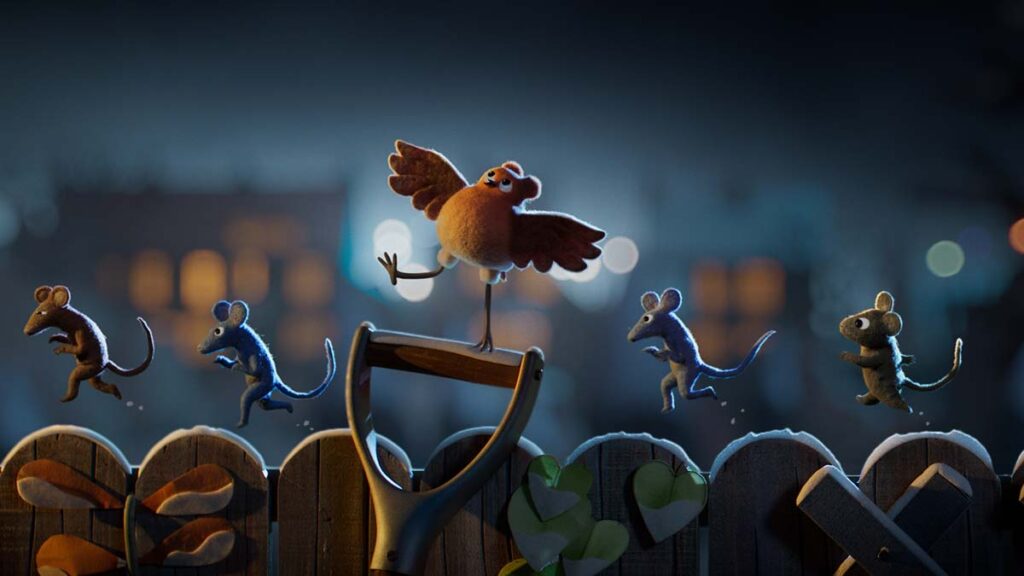 Robin (Bronte Carmichael) is hatched in a rubbish dump after being separated from her family while still in her egg. She’s discovered by a family of mice led by Dad Mouse (Adeel Akhtar), who take her in and raise her as one of their own. After realising she’s different from the mice when she accidentally scuppers another mission to steal crumbs from a nearby house, Robin embarks on a journey to prove she can be a good mouse. Along the way she meets a materialistic Magpie (Richard E. Grant), who shows her his way of life, and Robin tries to pull off her biggest heist yet.

‘Robin Robin’ is a 30-minute animated film from Aardman Animations and Netflix. Released earlier this week as the countdown to Christmas picks up pace, the film is a heart-warming and rather lovely watch for the whole family. Rather than using plasticine models as they did in ‘Wallace & Gromit’ and many of their other productions, Aardman has instead used felt models. It’s a really nice touch to separate it from everything that’s come before and it makes the animals look even more realistic.

The story of ‘Robin Robin’ is fairly simple and at its heart there’s a message of inclusion, particularly that you don’t have to be the same as someone else to be part of their family. Robin grows up confused about who and what she is, as the only life she’s known is that of a mouse. While she tries her best to fit into that life, it becomes increasingly more difficult and the frustration that builds up in her family becomes evident. Robin deciding to forge her own path leads her on a journey of self-discovery and during that time she finds out who she really is.

Following a delightful opening, the world gets a little darker once Robin meets Magpie and the two of them encounter the terrifying Cat (Gillian Anderson). The darker side of the story, which may be frightening for very young children, features plenty of humour and there’s a nice balance that’s established. Anderson clearly relishes her chance to play a villain too, using her voice to really terrify the audience. She’s wonderful here and a perfect foil for Bronte Carmichael’s wide-eyed Robin.

Mention should also go to Adeel Akhtar and Richard E. Grant, who are excellent as Dad Mouse and Magpie respectively. Akhtar brings warmth to the screen through his character while Grant introduces an element of danger that ultimately helps Robin discover her true self. The film is also punctuated by musical moments, which work really well and add to the magic of it all.

‘Robin Robin’ is a lovely film that is destined to become a firm favourite for families at Christmas time. Aardman Animations always deliver and writers and directors Daniel Ojari & Michael Please serve up entertainment for all ages. I’ll definitely be putting this on a few times in the run-up to Christmas but take my recommendation and watch it with your little ones on Christmas Eve. It’ll add that extra bit of magic to the season!

TKSS: Abhishek Bachchan reacts to ‘when our wives aren’t home…’ comment from fan on pout pic with Amitabh Bachchan

Here are five facts about BTS’s birthday boy Jin you should know!

Ali Fazal on next Hollywood outing: I’m humbled to be sharing my notes with the best…