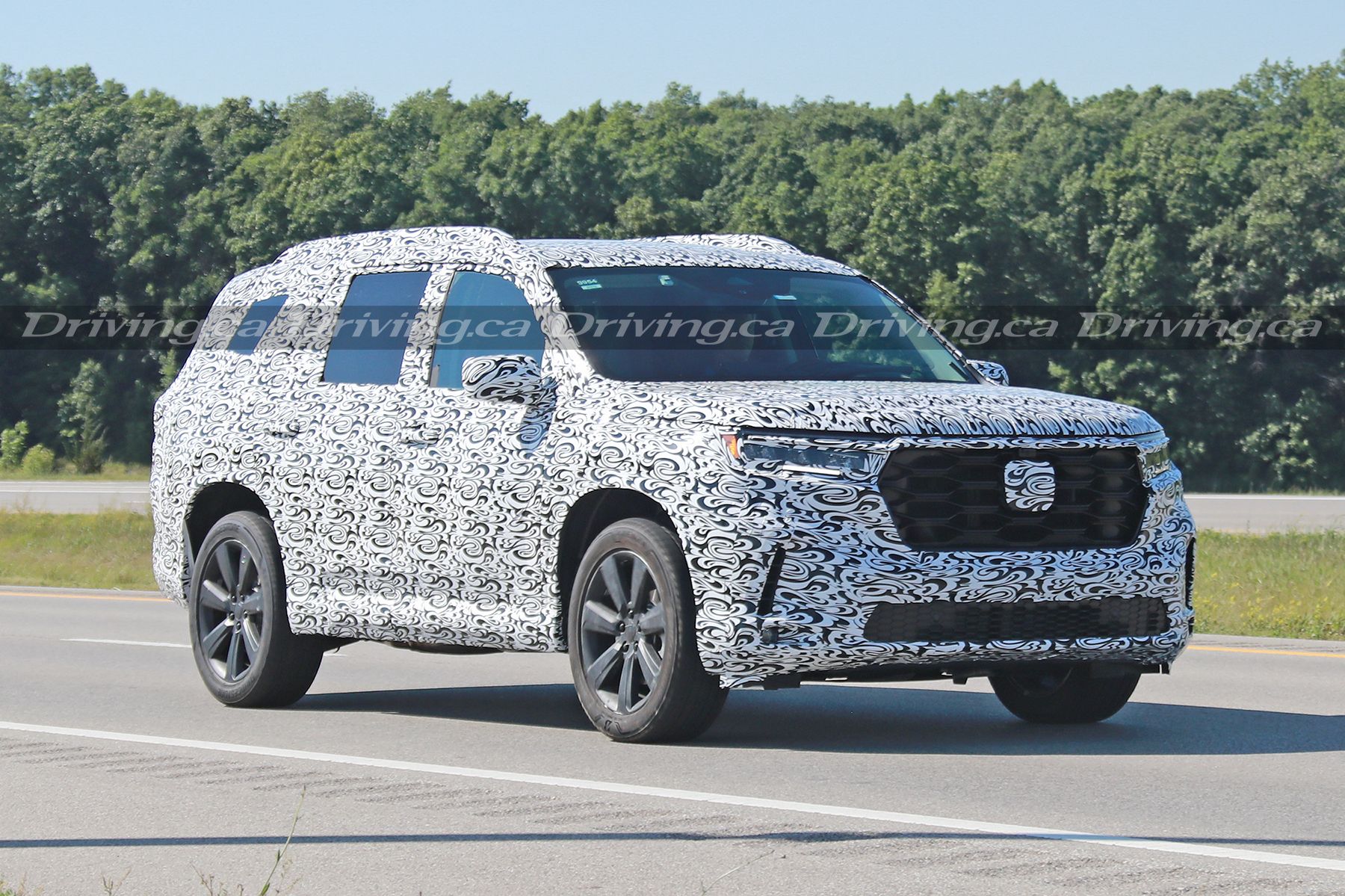 Welcome to our roundup of the biggest breaking stories on Driving.ca from this past week. Get caught up and ready to get on with the weekend, because it’s hard keeping pace in a digital traffic jam.

Here’s what you missed while you were away.

Spied! 2023 Honda Pilot and Accord spotted in camouflage

Looking at test vehicles covered in camouflage can feel like staring at a magic eye picture: if you gaze long and hard enough, you might be able to see shapes behind the patterns, or you might just get a headache. Honda fans had their visual acuity tested this week by a number of camo’d shots as both the 2023 Pilot and Accord were spied out for a test jaunt somewhere in the American Midwest.

A gallery of 2023 Honda Pilot images shows shades of the mid-cycle refreshed Ridgeline at the front end with a chunkier outline, a new front fascia, new LEDs and fog lights, and a sporty grille. At the back, there are clear Accord genetics in the taillights, plus a new rear fascia, and tailgate.

Images of Honda’s four-door family Accord, meanwhile, reveal what look like new headlights and a trunk-mounted spoiler, which may suggest a Sport model to come. More 2023 Accord spy shots here.

There’s no foul where there’s no harm, as the saying goes — but where there are photos, there may be some giggles. Hopefully, the Affleck-Lopez household is ready to laugh at the mild accident that actor Ben Affleck’s 10-year-old son caused in front of an L.A. exotic car dealership this week, because we sure are. The pre-teen was allegedly behind the wheel of the yellow Lamborghini Urus when it reversed into the front of a white BMW SUV. Nobody was injured, and despite the dramatic looking imagery and videos, neither of the vehicles was damaged at all. “You could tell that Ben very much regretted letting Sam get into the driver’s seat,” a source told People. “He seemed upset about it.”

Ford is following in the footsteps of some of its competition with the installation of rules from up high that will limit buyers from reselling the F-150 Lightning for one year after purchase. GM, Honda, and Tesla have already made the move in an attempt to capture some of the profits buyers are getting from reselling in-demand EVs in this hot market. The Blue Oval will also enable its dealers to outright omit the purchase agreement from Lightning lease contracts, forcing leasees to sell their trucks back to the house at a locked-in rate.

But ask Ford, and they’ll say it’s all for the environment: “Ford Motor Company is committed to making Battery Electric Vehicles (BEVs) more sustainable and affordable for our customers by localizing the complex battery supply chain network, creating recycling options for end-of-life vehicles, and increasing U.S. battery production.” Get the details here.

A B.C. driver who found themselves in a messy situation, not of their own making, had to rely on the kindness of strangers and a GoFundMe account just to get her car cleaned up. The woman being referred to as “Jane” was on her way to her Surrey, B.C. home on June 16 when she came across a stranger in distress and badly bleeding. The man entered her car uninvited and demanded a ride to the hospital. But when Jane got her car back from police who were investigating the incident, it was still covered in blood stains — stains that required cleaning that ICBC said she wasn’t covered for, and for which the provincial Crime Victim Assistance Program also seemed unprepared to help directly with.

A GoFundMe set up in Jane’s name has since raised the required cleaning fee, which the assistance program will hopefully also reimburse.

Initial vehicle quality is worse than ever, J.D. Power

J.D. Power is reporting the worst scores for its U.S. Initial Quality Study (IQS) in the 40 years the group has been tracking it. The study looks at the number of problems owners of new vehicles experience, essentially giving a barometer for overall product quality. And this year it revealed an 11 per cent increase in problems per 100 vehicles (PP100), signalling a decrease in quality with an additional 18 PP100 compared to 2021.

“Given the many challenges automakers and their dealers had to face in the past year, it’s somewhat surprising that initial quality didn’t fall even more dramatically,” said David Amodeo, director of global automotive at J.D. Power. “In general, initial quality has shown steady improvement throughout the history of this study, so the decline this year is disappointing—yet understandable.”

Not all makers took a hit in their initial quality rankings, however; GM improved overall, earning in the top spot for auto corporations, while brands like Buick and Genesis also scored well. View the rankings and read more here.

Everything We Know So Far