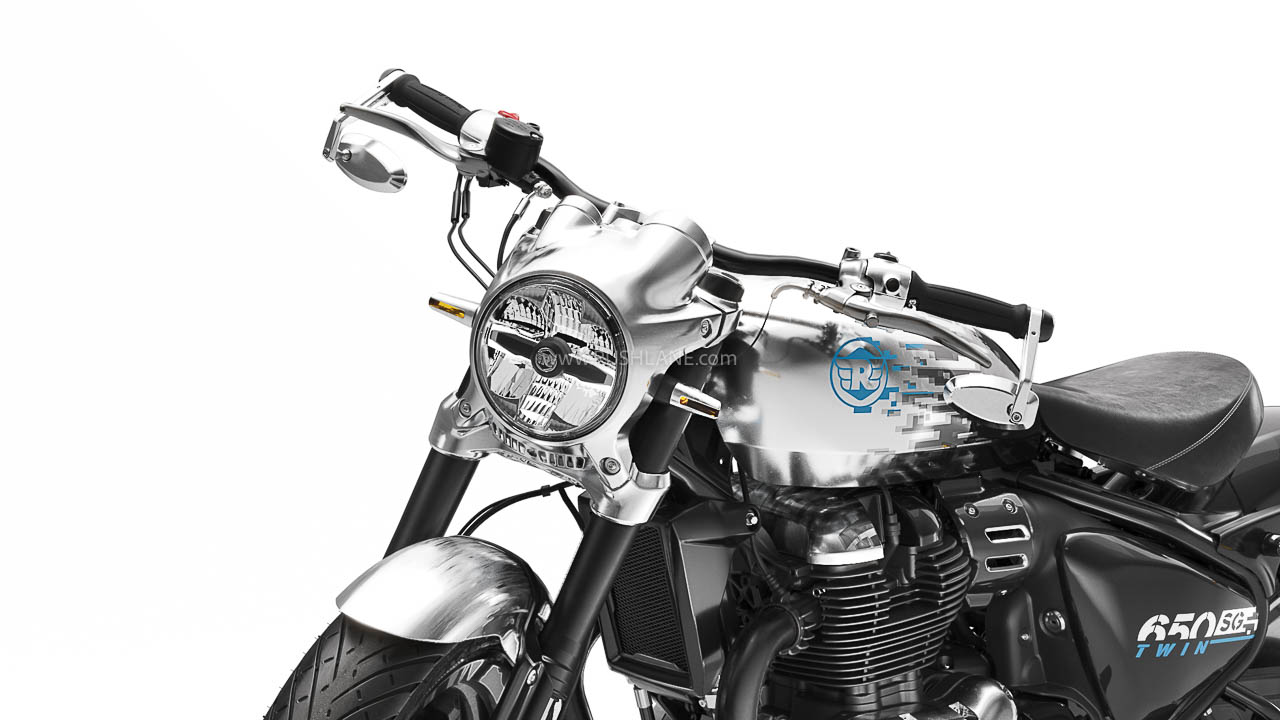 Back in 2018, Royal Enfield had unveiled bobber-styled Concept KX at EICMA. ‘838’ engraving on the engine indicated that the motor was of 838cc capacity. While Concept KX is not going into production stage anytime soon, its core design format will be utilized for the new 650cc cruiser from Royal Enfield. The latter has now made its global debut as SG650 at 2021 EICMA.

After unveiling their 120th anniversary edition of Interceptor 650 and Continental GT650, Royal Enfield has now revealed an all new 650cc motorcycle concept called SG650. It is an all new motorcycle, which is likely to be transformed into a production spec bobber sometime next year.

It is seen with dual instrument pods, a larger unit on the left and a smaller one on the right. The latter is Tripper navigation display unit, which was first seen with Meteor 350. It is possible that the 650cc bobber SG650 can get a new range of connectivity features. This would be expected from a premium bike that will be positioned above 650 twins in the company’s line-up.

SG in the SG650 likely stands for Shotgun. Royal Enfield has trademarked the name Shotgun for an upcoming motorcycle. It is likely that the SG650 concept becomes Shotgun 650 upon launch. Powering the new Shotgun 650cc bobber will be the same 648cc, parallel twin motor that does duty on Interceptor and Continental GT. It makes 47 bhp at 7150 rpm and 52 Nm at 5250 rpm. It is mated to a constant mesh 6-speed gearbox.

The engine has been designed for real world riding conditions. It suits city streets as well as effortless cruising on open roads. It is possible that the engine could be tweaked slightly on 650cc bobber to make it more suitable for long distance touring.

While 650 twins have standard telescopic forks at front, the new 650cc cruiser is expected to get USD forks. In that case, it will be the first Royal Enfield bike to get this feature. USD forks will allow better handling and safer braking at high speeds.

At the rear, the bike will get standard twin shock absorbers. Braking system could be the same as 650 twins – 320 mm disc at front and 240 mm at rear. Dual-channel ABS will be offered as standard. In India, Royal Enfield 650cc bobber is expected to be launched at around Rs 4 lakh (ex-sh). It will be a pretty good deal at this price point. The SG650 upon launch will also be sold in several international markets.

Royal Enfield is also expected to launch a cruiser based on this bobber concept sometime next year. It remains to be seen the type of response the 650cc bobber cruiser generates. On its part, Royal Enfield will surely be looking to achieve the same level of success and popularity, as associated with 650 twins.

BMW is giving classic Minis an electrified and recharged future

Porsche 911 Hybrid Variant To Debut Soon, Focus On Being Powerful

Highway code changes POLL: Will you give cyclists priority under new rules?