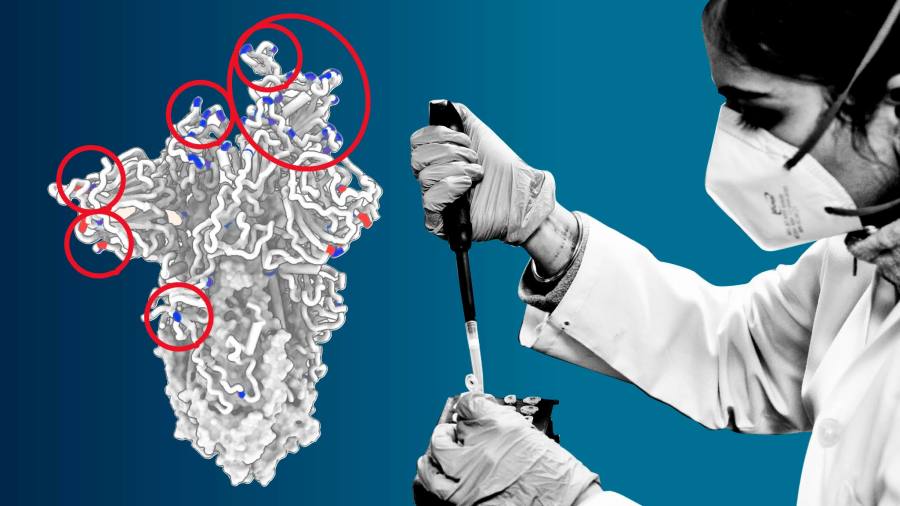 Reports of a heavily mutated coronavirus variant first surfaced in late November after a flurry of baffling genomes was uploaded to a global database.

Omicron, as it came to be known, was traced back to a disparate set of cases: university students in South Africa’s capital Pretoria, a diplomatic mission in Botswana and a South African traveller in a Hong Kong quarantine hotel.

As health officials worldwide try to contain the rapid spread of the variant, which has been detected in more than 50 countries on six continents, scientists continue to puzzle over its origins.

The mystery stems from the question of how “a whole raft of mutations” emerged “under the radar”, according to David Stuart, professor of structural biology at Oxford university.

Omicron’s genetic traits bear more similarity to forms of the virus circulating last year than more recent strains, such as Beta and Delta. “It seems to have been hiding for a year,” said Sarah Otto, professor of evolutionary biology at the University of British Columbia.

The effort to explain where and how Omicron was quietly evolving has given rise to competing theories.

The most popular view among virologists is that it spent months mutating in an immunosuppressed person with a chronic infection. Other ideas include evolution accelerated by the use of anti-Covid drugs, and crossover into an animal species that later jumped back into humans.

Given that South Africa has faced the first wave of Omicron infections, it is likely that the variant traces its roots to somewhere in the region, said Richard Lessells, an infectious diseases physician at the University of KwaZulu-Natal in Durban.

A South African research team, which included Lessells, discovered an untreated HIV patient late last year who was infected with Covid-19 for more than six months and gave rise to a string of mutations that affected the spike protein, the part of the virus where most of Omicron’s adaptations are located. A UK study observed a similar process in a Covid patient with blood cancer.

The immune response of an untreated HIV patient would be “too weak to clear the virus but strong enough to drive the process of evolution”, explained Lessells. He said this process would allow coronavirus to mutate without being “picked up” as many of these patients are asymptomatic and therefore do not get tested.

“This evolutionary pathway is likely to be rare but it’s a plausible reason for the emergence of Omicron,” said Lessells.

More than half of the world’s 37.7m HIV sufferers are in east and southern Africa. In South Africa alone, around 1.9m individuals have HIV that is undetected, untreated or poorly controlled, according to UNAIDs, the UN programme on HIV/Aids.

Jonathan Li, director of the Harvard/Brigham virology specialty laboratory in Boston, said it was “striking” that two variants of concern — Beta and Omicron — had arisen in southern Africa, a region with “large numbers of immunosuppressed individuals as a result of HIV infection”.

“The collision of high case numbers, low vaccine availability and decades of an HIV crisis means that the chance immunocompromised individuals have been carrying Covid for a while is very high,” said Otto. “It’s important to recognise that many of these health crises are not independent of one another.”

Another theory about how Omicron emerged in southern Africa has been advanced by William Haseltine, a virologist who has speculated that mutations could have been caused by Merck’s Covid-19 antiviral pill. He noted that South Africa was among the locations chosen for clinical trials of the drug molnupiravir, which began in October 2020.

The drug disrupts the ability of the virus to replicate by causing an explosion of errors that prevent it from spreading when mutations reach a certain level.

UK and EU regulators have already authorised molnupiravir for emergency use but some scientists, including Haseltine, have warned that its mutagenic properties could, under certain circumstances, create more dangerous variants. These concerns were also raised by external experts at a US Food and Drug Administration meeting last week.

“That is a very heavily mutated virus and that is the kind of patterns you see with molnupiravir,” Haseltine told the Financial Times. “And the timing is right. I’m not saying it happened, but it could have happened.”

Merck told the FT that Haseltine’s “unfounded allegation has no scientific basis or merit”.

“There is no evidence to indicate that any antiviral agent has contributed to the emergence of circulating variants,” said a Merck spokeswoman.

As more genomes are sequenced worldwide, researchers are beginning to piece together the origins of Omicron. Each genome from areas with limited genomic surveillance coverage helps understand the “missing branches” of Omicron’s phylogenetic tree, said Lessells. More than 1,300 Omicron sequences have been uploaded to Gisaid, a global genomics repository, since November 22. 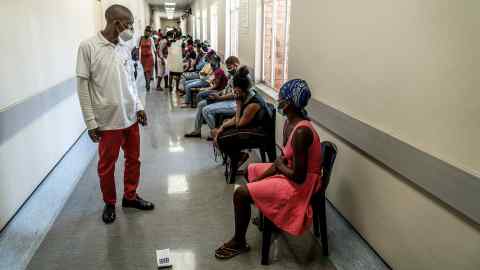 Recent sequencing has shown the idea that Omicron was spreading undetected for some time in an area not sampled by genome testing to be “increasingly implausible”, according to Stuart Ray, professor of medicine at Johns Hopkins University.

“As we get more sequencing data, it is clear that the genomes are tightly clustered,” explained Ray. “There would be more diversity if it had been spreading undetected.”

The theory that the mutation arose in animals before being passed back to humans “is not completely implausible but there is very little reason to believe that happened”, Ray added. “When you look at the passage of human viruses in animals, they accumulate mutations that are suited to that host, not to humans.”

Back in South Africa, medics and scientists stressed that, regardless of how Omicron emerged, richer, western nations should learn the lessons of its evolution.

“We’ll never find patient zero,” said Prof Ian Sanne, director of the HIV research unit at the University of the Witwatersrand. “But we must prevent history from repeating itself.”

“For the pandemic to end, we have to . . . address all regions of the world at the same time. It worries me that Africa could be the last in line for an Omicron-specific vaccine, if it’s necessary.”

What NYC Dog Owners Should Know About Leptospirosis

OnePlus 10 Ultra superphone claimed to be in the works with…

These are Airbnb’s most liked homes on Instagram for…