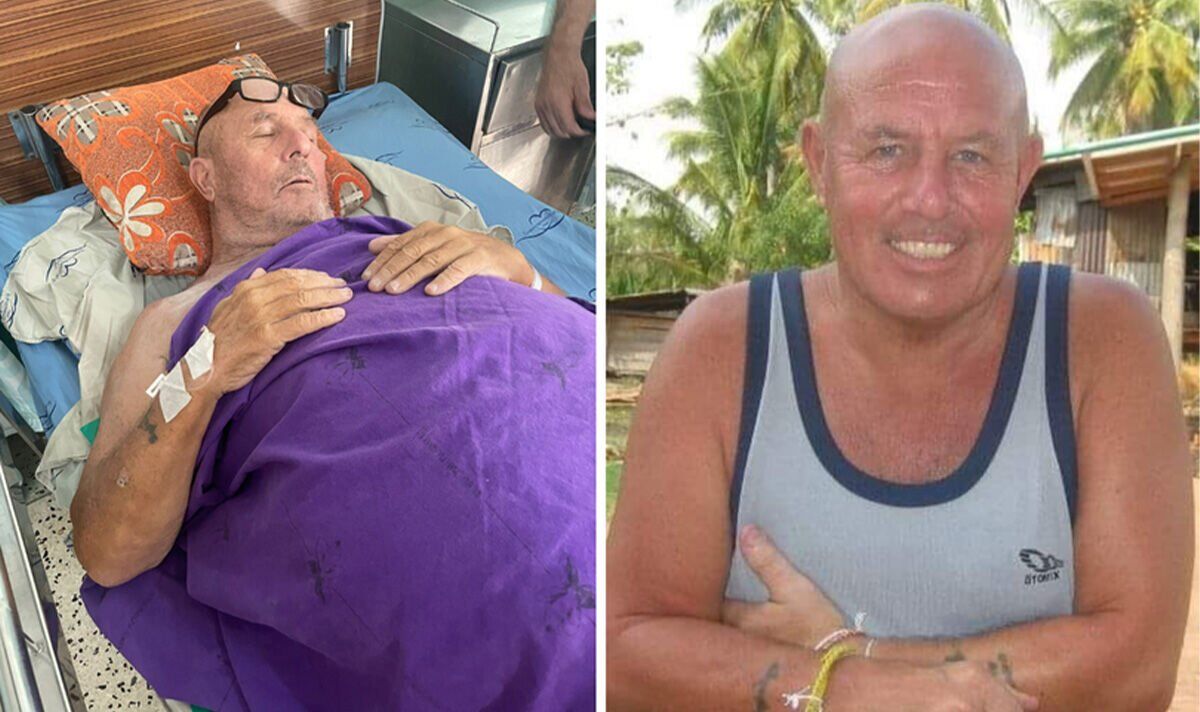 A father is stuck in a hospital in Thailand and facing the amputation of his leg after apparently being stung by a scorpion. Alan Stephenson, 73, was injured while on holiday in South-East Asia and has since developed a flesh-eating disease that has stripped the skin and flesh from his leg between his foot and his knee (warning: graphic image below).

But his desperate family now face an £18,000 bill to bring him home, reports HullLive.

His son Kristian Stephenson, 44, endured an arduous journey to reach his dad in a remote part of the country miles from the closest city. When he finally reached Alan’s bedside, he despaired at the conditions he found and feared for his father’s life. He said he saw cockroaches on the hospital ceiling and stray cats eating food meant for patients. His father was in “absolute agony” a state of confusion, and unable to recall where his visa or documents were.

“It was like something from Banged Up Abroad,” Kristian said. “The hospital was terrible and didn’t have the resources to do anything with his leg. I thought: he is going to die here.”

Eventually, Kristian managed to move his father to another hospital, but despite a doctor in the UK indicating it may be possible to save the leg, the family is facing a huge bill to bring Alan back home because the journey requires employing a medical repatriation team. Now, Kristian has launched a Just Giving page to raise the thousands of pounds needed

Alan, who is from Hull, had travelled to Thailand to spend a few months exploring the country, but after being bitten by what he believed to be a scorpion, contacted Kristian on November 9 to say he was in hospital and his health was deteriorating.

Alan suffers from diabetes and it is believed this contributed to his leg becoming red and swollen. A short time later, infection set in and Alan was diagnosed with a flesh-eating disease. He has been told amputation is the only realistic option.

After receiving the call from his dad, Kristian dropped everything to head out to Thailand. “His leg looked horrendous, but because he wasn’t being turned over or helped out of bed, he had bed sores that were just as bad,” Kristian said.

“As this was going on, the place he had been staying was demanding rent and taking his belongings to cover the cost, and the hospital was charging an extortionate amount of medical bills in cash. The nearest ATM was around an hour away as the area was so remote, with no place to even get a cold drink nearby, and the walk to the hospital was around 3km.”

The family made the decision to move Alan to another hospital in a small town, “which was a lot better but also more expensive.” At the second hospital, doctors said they would be able to remove Alan’s infected leg, but according to Kristian the operation has been rescheduled several times, meaning the family is having to pay out more and more in hospital fees.

Kristian has asked for help from the British Embassy but has had little success. He is being helped from Hull by his MP Karl Turner. Kristian continued: “The British Embassy has shown no interest in the case and we are often waiting on responses due to the time difference. We have been told that the Government would not contribute to any costs towards flying my dad home to be saved.

“Karl Turner has been in touch with me almost every day with advice and assured me that he is speaking to people above him, but I know there’s only so much he can do. I was advised to get in touch with a medical repatriation team, who could fly my dad home because a normal airline would not be able to do it.”

He added: “As luck would have it, we have found a company that I immediately connected with because the guy who runs it is also from East Yorkshire. My dad has received a fit to fly certificate and he is starting to look better in himself, but now we face raising £18,000 to pay for the service, which is the lowest rate possible.”

Kristian has desperately trying to raise money from family and has used his own savings to cover medical bills. He and his wife had also only just shelled out £3,000 for flights to visit his dad in Bangkok in December – booked before he was injured – and say they are currently being refused a refund.

The medical repatriation company suggested starting a Just Giving page, and £4,607 has already been raised. Kristian said: “The plan now is to get my dad back to Hull full time and save his life. We know he will most likely be disabled for the rest of his life, but we are hoping he can somewhat recover.”

Karl Turner said he was pushing ministers to give the family the support they needed. He added: “Since Kristian contacted my office regarding his dad’s situation I have been speaking with government ministers continuously to see if they can help with Alan’s repatriation to Britain.

“I am aware that Kristian is now with Alan but he is apparently struggling to get support from the British consular teams in Thailand. I will continue to push government ministers to ensure that’s Kristian and Alan get the support they need at this incredibly worrying time.”

To contribute towards Alan’s medical repatriation, you can find his Just Giving page here.