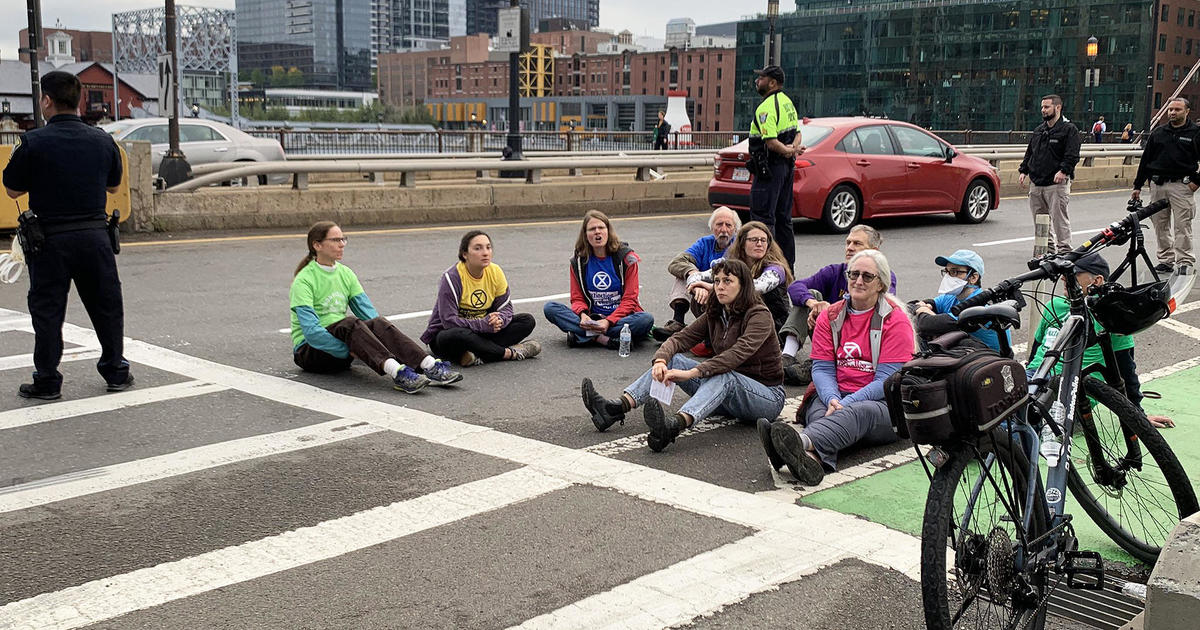 The environmental group Extinction Rebellion said it had planned to block four major traffic routes around the city to protest fossil fuels.

“Locations were selected to clog the Central Artery of Boston to prevent employees from getting into the financial district and Seaport,” the group said in a statement Wednesday.

They claimed more than 40 activists would be involved, “locking themselves to large pink metal barrels adorned with banners on top that read the messages of their demands to halt new fossil fuel infrastructure.”

Massachusetts State Police told WBZ they had a “detailed operations plan in place” and were “prepared to take enforcement action if necessary.” Troopers later took five people into custody on the ramp from Leverett Circle to Route 93 in Boston around 7 a.m.

Another group sat on Summer Street while Boston Police stood around them, allowing one lane of traffic to get by, until 8 a.m. when the demonstrators left.

The spokesperson for the group told WBZ-TV’s Anna Meiler they had to clear the road by 8 a.m. or they would all be arrested.

Authorities could later be seen towing away a pickup truck in Boston that was carrying two pink barrels and several posters.

The group said it planned to block drivers coming into the city from “the Seaport, I-90E, and the offramp of I-93S into downtown Boston.”

According to WBZ-TV’s Breana Pitts, drivers said troopers were set up at almost every exit on Route 128 from Rockport to Reading and on Interstate 93 into Somerville.

A larger group also came to Post Office Square in Boston and then marched toward the Seaport as part of the protest while State Troopers followed them.

Around 8:30 a.m. the protesters stopped and blocked one side of the bridge leading to the Seaport from the Financial District. Some sat on the road while others stood holding signs. An organizer told WBZ-TV’s Nick Giovanni they were going to try to stay there for an hour, but they moved on after 45 minutes.

“We have trained police liaisons whose responsibility is to communicate with the officers for us. They just make sure that no one here is doing anything that’s an arrestible offense,” an organizer told reporters.

“We assured folks who were coming to this protest that this was not going to be something you could be arrested for. We make sure that the police liaisons are communicating with officers here so that everyone is being safe, no one is breaking any laws and they just make sure we’re all on the same page.”

Denial of responsibility! Pedfire is an automatic aggregator of the all world’s media. In each content, the hyperlink to the primary source is specified. All trademarks belong to their rightful owners, all materials to their authors. If you are the owner of the content and do not want us to publish your materials, please contact us by email – [email protected]. The content will be deleted within 24 hours.
boston
0
Share

Jake Paul clip emerges of FaceTime with Tommy Fury in…